This page looks different to our usual site because it is from our back catalogue. More recent articles are here.
» Back

Where does a horse owner's liability lie?

February 19, 2010
What if your horse escapes and causes damage? What if someone's dog or a speeding driver spooks your mount when out for a ride? Solicitor Kieran Heenan, of Cordner Hill Law in Christchurch, explores some of the liability issues around horse ownership.

A number of questions have been raised by Horsetalk readers concerning the liability of horse owners.

This article will provide a general overview of the liability of animal owners.

In turn, this should answer many of the questions that concern horse owners in particular, and provide guidance to other potential liability issues.

The key issues of interest to horse owners fall into four main areas: the liability of owners whose horses stray onto roads, the liability of dog owners, obligations of particular road users and personal injury caused when riding horses.

We'll focus on these four areas and more specifically on:

Liability of Owners of Animals

Animals on the Highway

At common law, the owner of an animal was not under any duty to take reasonable care to prevent any of his or her animals (not known to be dangerous) from straying on to the highway¹. This rule was abolished in New Zealand by section 5 of the Animals Law Reform Act 1989.

Section 5 of the Animal Law Reform Act states that if an animal strays onto the highway there are several key factors which must, by statute, be considered when determining whether or not the owner of the animal is liable for the damage caused by their animal. The two key factors that are taken into consideration are:

If a horse was to stray onto the highway and causes damage, to determine whether the owner will be liable for the damage, consideration will be given to the above factors. It can be suggested that if the fences and safety measures put in place to prevent a horse from straying onto the road are of the standard that is common practice for the owner's particular locality, and measures have been taken to warn users of the highway of the likely presence of animals on the highway, the owner will mostly likely not be held liable.

From the Act it cannot be determined whether both of the above factors must be satisfied in order to avoid liability. The section itself is rather general and simply states that consideration must be given to the abovementioned factors.

Determining liability will most likely rest on examination of the common practice in the locality of the highway. Therefore no blanket rule can be applied and liability is likely to be determined on the individual facts of each case.

The owner or the person who is in charge of an animal may also be liable for any damage caused by that animal if it is on a designated motorway in breach of the Government Roading Act 1989. Section 82 of the Act provides that no animal which ought to be under a person's control may be on the motorway unless the animal is on the motorway for the purposes of an emergency or in connection with work that is authorised by the New Zealand Transport Agency. Section 82 makes it quite clear that an animal should not be on the Highway and if none of the above exceptions apply, the owner or the person in charge of the animal will be liable for any damage that may result from a collision with or attempted avoidance of the animal, unless the owner or person proves that the presence of the animal on the motorway was not due to any negligence on his or her part.

Unlike the section 5 of the Animals Law Reform Act section 82 does not mention any criteria used to determine liability. Unless you meet one of the listed exceptions you are likely to be held liable for any damage caused. The wording of section 82 focuses on "leading" and "controlling" your animal on the motorway, it can be suggested that the focus of this section is on owners who are leading or riding their animals on the motorway rather than an animal that strays onto the motorway. Therefore if your horse was to stray onto the highway and cause damage it is unlikely that you would be held liable under this Act.

Disturbance of domestic animals by a trespasser

Section 6 of the Trespass Act 1980 deals with the disturbance of domestic animals by a trespasser. Section 6 holds that a person commits an offence under the Act who trespasses on any private land and willfully or recklessly disturbs any domestic animal on that land. If a person is in breach of this section they can be liable to a fine not exceeding $300 or to imprisonment for a term not exceeding 1 month.

Under section 3(1) a person will be guilty of an offence under the Act if they trespass on any place and, after being warned to leave that place by an occupier of that place, they neglect or refuse to do so.

Liability for damage done by dogs

Under section 63 the Dog Control Act 1996 an owner of a dog is liable for any damage done by their dog. It is not necessary for the person seeking damages to show previous dangerous tendencies by the dog, or that the owner had knowledge of any such dangerous tendencies. Where injury has been done by the dog, there is a rebuttable presumption under s 63 that the injury is attributable to the owner's neglect, meaning that unless the dog owner proves otherwise they will be liable. "Damage done by the dog" includes damage by way of wounding. Even where additional treatment cannot be anticipated, it is nonetheless a consequence of the wounding and the responsibility of the owner of the attacking dog. The liability of an owner of a dog is not just restricted to the dog attacking an animal. The Act imposes obligations on the owners of dogs to ensure that dogs do not cause a nuisance, injury, endangerment, distress to any persons, or to any stock, poultry, domestic animal, or protected wildlife.

Applying section 63 of the Dog Control Act it can be suggested that if a dog was to attack and wound a horse the owner of the dog will be liable for any vet bills and subsequent treatment that is a result of the attack. As stated above the liability of a dog owner is not just restricted to the dog attacking an animal, so if a dog was to cause distress or endangerment to a horse causing it run into a fence and hurt itself, the dog owner could be potentially liable.

The Land Transport (Road User) Rule 2004 sets out the regulations for road users. All road users must follow these rules they are not simply guidelines but are mandatory. The majority of these regulations can be found in the New Zealand Road Code.

Clause 7.22 of the Act sets out the obligations for road users in relation to animals. It states that a road user must exercise due care towards a person moving animals on the road and riding an animal on the road. "Due care" has been interpreted to mean that a road user must take all reasonable steps to avoid causing harm to other road users. The example of exercising due care when moving towards animals mentioned in the Road Code is that a "driver should slow down and not sound their horn". It should be noted, however that sounding the horn will not necessarily mean the driver of the vehicle was not acting with due care. It is one factor that will be taken into consideration when determining whether due care was exercised. 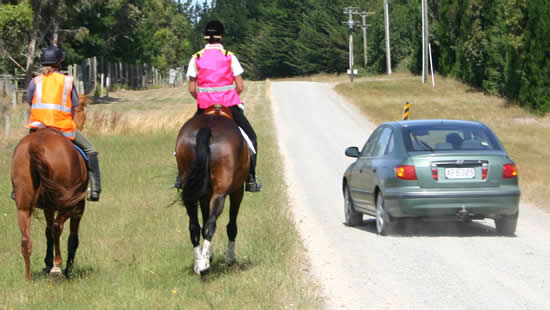 Part 11 of the Land Transport (Road User) Rule 2004 outlines the requirements for particular road users. Clause 11.14 to 11.15 specifies the following mandatory rules for riders of Animals:

A rider who leads any animal by rope, rein, or other similar means of guidance must,-

The expression 'exercise due care' in 11.15 (c) means that when leading an animal all reasonable steps must be taken to avoid causing harm to other road users by not letting an animal run out onto the road causing a traffic hazard.

In New Zealand personal injury is covered by the Injury Prevention, Rehabilitation, And Compensation Act 2001. The Act provides cover for a person who has suffered physical injury from a personal injury. The Accident Compensation Corporation (ACC) administers the cover and Provides no-fault personal injury cover for all New Zealand residents and visitors to New Zealand. This means you can apply for help, no matter how you got injured, or whose fault it was. Due to the wide range of services and cover available from ACC after an injury, you can not sue for personal injury in New Zealand, except for exemplary damages which only apply in exceptional circumstances. This means for example if a friend comes to your property and they are injured riding your horse you will not be personally liable for their injury or any loss attributed to the injury, unless exceptional circumstances apply. As stated above, ACC provides no-fault personal injury cover and they will meet some of the costs that are associated with the injury, such as any loss of earnings if the injured person is unable to work. Because of this you can not be sued for the personal injury that resulted from the person riding your horse, therefore you will not be held liable for any damages.

The main focus, of the legislation and regulations that establish liability of owners of animals, is on whether the owners have taken the necessary steps to limit the potential for their animals to cause damage, and to ensure that due care is exercised at all times.

To reduce the risk of potential liability horse owners should ensure that they have taken steps to prevent their horse(s) from being in a situation which is likely to cause damage or harm to others. Ensuring that fences and gates are of an acceptable quality and following the rules for riding horses on the road are all important factors that are looked at when determining liability. Satisfying these considerations will greatly reduce the risk of liability.

Disclaimer: The information contained in this article is general legal information and should not be construed as legal advice to be applied to any specific factual situation. We try to provide quality information, but we make no claims, promises or guarantees about the accuracy, completeness, or adequacy of the information contained in this article. As legal advice must be tailored to the specific circumstances of each case, and laws are constantly changing, nothing provided herein should be used as a substitute for the advice of competent legal counsel.