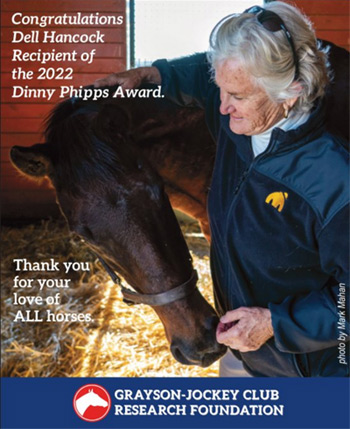 Longtime thoroughbred industry identity Dell Hancock is to receive US racing’s Dinny Phipps Award, which honors an individual or individuals who have demonstrated dedication to equine health.

The award will be presented on Thursday night at the Belmont Stakes Charity Celebration in New York.

Racehorse owner and breeder Earle Mack initiated the award in 2017 on behalf of the Grayson-Jockey Club Research Foundation, in memory of former Jockey Club chairman Phipps, who died in 2016. Hancock is the fifth recipient of the award, after the Phipps family, Frank Stronach, John Oxley, and Michael Del Giudice.

“Dell has been a tireless worker and friend in every area of our industry and most deserving of the Dinny Phipps award,” Mack said. “Dell, thank you for a lifetime of dedication.”

Under her leadership, Grayson has become the largest private funder of equine research. Since 2004, the year Hancock became chairman, Grayson has provided more than $21 million to fund 231 projects as well as an additional $480,000 to fund 30 career development awards.

Hancock said she had great respect for Dinny Phipps. “The Hancock family and the Phipps family have a long, deep relationship, which makes me even more honored to be the recipient of this award bearing Dinny’s name. He is a man I respected in so many ways.”

The Belmont Stakes Charity Celebration, traditionally one of Grayson’s largest fundraisers, will be held at the famed Tavern on the Green in New York City’s Central Park.