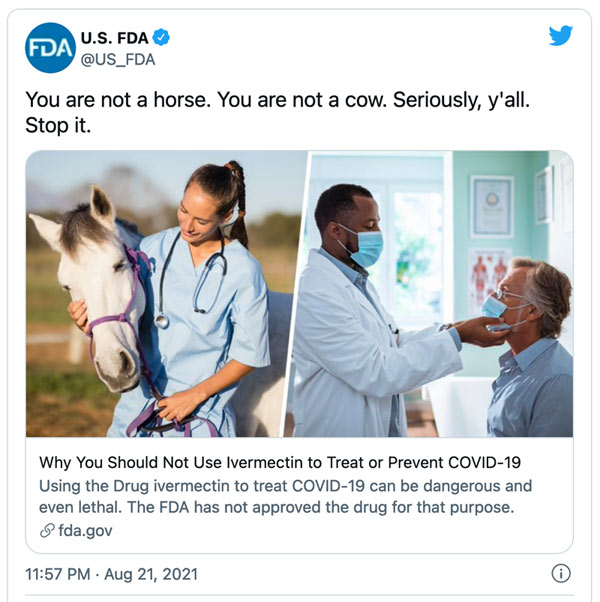 The US Food and Drug Administration (FDA) has a message for those looking to use the drug ivermectin to treat Covid-19: “Stop it”.

The FDA says it has received multiple reports of patients who have required medical support and been hospitalized after self-medicating with ivermectin intended for horses.

Reports emerged earlier this month of a surge of ivermectin sales from farm supply stores from people buying it in the belief it will cure Covid-19.

In a consumer update, the FDA said it had not approved ivermectin for use in treating or preventing Covid-19 in humans. “Ivermectin tablets are approved at very specific doses for some parasitic worms, and there are topical (on the skin) formulations for head lice and skin conditions like rosacea. Ivermectin is not an anti-viral (a drug for treating viruses).”

Ivermectin tablets are approved by the FDA to treat people with intestinal strongyloidiasis and onchocerciasis, two conditions caused by parasitic worms.

“Never use medications intended for animals on yourself. Ivermectin preparations for animals are very different from those approved for humans.

“For one thing, animal drugs are often highly concentrated because they are used for large animals like horses and cows, which can weigh a lot more than we do — a ton or more. Such high doses can be highly toxic in humans,” the FDA said.