A free webinar on genetic preservation and animal cloning is being hosted by Tullis Matson next week.

In the first British Breeding webinar for 2021, Matson will talk to Gemini Genetics and ViaGen Pets and Equine to explain the concept and applications of animal genetic preservation and animal regeneration (cloning).

Matson, of Stallion AI Services, will describe the process in submitting samples for genetic preservation and the applications of the technology to not only the equine breeding industry but also to the preservation of rare and endangered breeds and species.

Matson was behind the use of sex-sorting of equine semen that resulted in the birth of a Suffolk Punch filly foal last year. With fewer than 72 female Suffolk Punches remaining in Britain and fewer than 300 in the world, every female born is vital to the survival of this endangered and iconic British horse.

He will then hand over to Blake Russell, president of ViaGen Pets and Equine, for an exclusive insight into the world of animal cloning. Live from their premises in Texas, Canada and South Carolina, this webinar will give behind the scenes access to the extensive facilities and technologies. It will cover everything from companion animal cloning to equine cloning and even rare and endangered species regeneration. A live viewing of the world’s first cloned Przewalski’s horse foal is also on the agenda.

Pre-registration is essential. Those booking will receive a link and access code for the webinar.

» Register for the webinar, on Thursday, January 28 at 7pm (GMT) 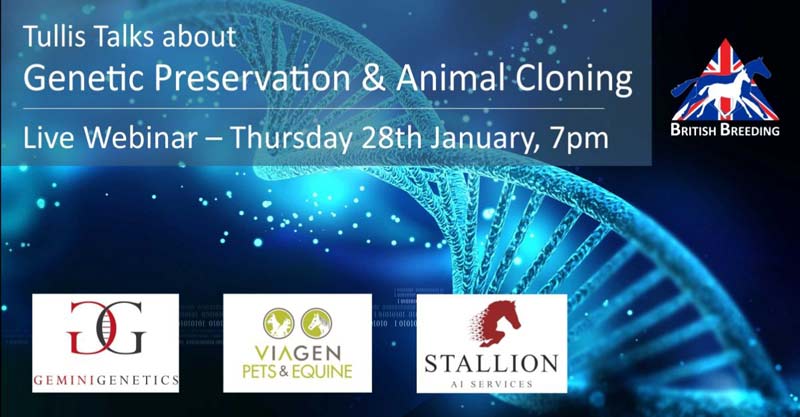 Blake Russell is President @ViaGen Pets and Equine, which deliver genetic preservation and cloning services to pet and horse owners worldwide. He also runs an equine breeding program at his ranch in North Texas, where he and his family take care of his prized cloned stallion Pure Tailor Fit, a clone of two-time AQHA Racing World Champion Tailor Fit. Blake has had a successful 25-year career in the animal genetics business working in more than 15 countries. He received his B.S. in Animal Science from Oklahoma State University and his MBA from Emory University.

Tullis Matson is Founder and Managing Director @Stallion AI Services. He began working in racing stables and then running his father’s non-thoroughbred stud at Twemlows Hall, before a study tour of New Zealand where he completed a course on the Artificial Insemination (AI) of horses. On his return, Twemlows Hall Stud Farm began practising AI for the first time. Tullis started Stallion AI Services Ltd in 1996 and this soon developed into taking stallions in for freezing, chilling and fresh insemination. In 2008, Tullis set up Equine Reproduction Supplies which is now the UK’s largest distributor of equine artificial insemination equipment and in 2010 was given the exclusive rights to distribute the world-renowned Minitube products in the UK. In 2011 Tullis Matson received the Marsh Christian Award for Conservation in Genetic Bio-Diversity, in recognition of significant technical, scientific and practical contributions to the field of genetic bio-diversity.