The challenges and perils faced by riders on Britain’s roads have been highlighted in a just-published study, with data indicating more than 60% of the country’s riders have experienced a road-related near-miss or accident.

Last year’s National Equestrian Survey estimated there are 27 million people in Britain with an interest in the equestrian industry.

The nation has an estimated 1.8 million regular riders, and 3 million people have ridden a horse at least once in the past year.

The survey revealed that a majority of riders (94%) take part in pleasure-riding activities, which can include hacking out around the roads.

Danica Pollard and John Duncan Grewar, in a paper just published in the open-access journal Animals, noted that horse riders frequently experience incidents with other road users, including dangerous near-misses and accidents.

For their study, the pair examined data on horse-related incidents collected via online reporting forms, in an initiative launched by the British Horse Society in 2010. Riders in Britain are encouraged to report any road-related incidents via the initiative’s website.

Pollard, who is with the society, and Grewar, with consultancy firm jDATA, set out to examine the incidents reported to the society. They looked at how they have changed over time and the factors which may increase or reduce the risk of collision incidents, and those resulting in horses being killed.

They analysed 10 years of data for their study, comprising 4140 horse-related road incidents. They excluded 33, as 25 were found to be duplicate incidents, six were not in Britain and two related to horses being transported in a trailer.

Wearing high visibility clothing reduced the risk of having a collision, they said.

“A horse death caused by a road accident was almost 12 times as likely to result in severe to fatal injury to the rider/handler,” they said.

Loose horses were more likely to be killed than ridden horses or those pulling a horse-drawn vehicle.

“Driver behaviour of how to pass horses safely on UK roads needs further improvement and will help reduce the risk of collisions and horse and human fatalities,” Pollard and Grewar concluded.

They reported a steady increase in the number of incidents each year.

Incidents were most common over spring and summer, accounting for 56.9% of the incidents reported. Most occurred between 10am and 2pm.

Less than half (42.4%) were reported to the police at the time of reporting to the society.

Most horses did not suffer physical injuries, but 18.6% were reported to have sustained mild to moderate injuries and 3.2% died or were euthanased as a result of their injuries.

Some riders and handlers commented on the psychological impact the incidents had on their horses:

One rider wrote: “Car approaching from front going too fast. I asked her to slow down — she braked hard and skidded on loose gravel on the road. Terrified, the horse spun around in front of the car and galloped down the road. We were so lucky that nothing was coming up fast behind us or I would not be here to write this note. Haven’t taken this horse on the road since because it scared her so much (and me).”

Another reported: “Vehicle came up behind horse too close. Rider waved driver on to pass when safe to do so but obviously driver was annoyed at being delayed for a few seconds so dropped car into second gear and sped past, startling the horse who then ended up in a ditch, scrabbled back out and nearly ended up on another car in his frightened state. Fortunately, rider is very experienced and was able to stay on and regain control but rider and horse were both very badly shaken and this is a horse who has never had a problem hacking out before and has been along this route frequently for three years.” 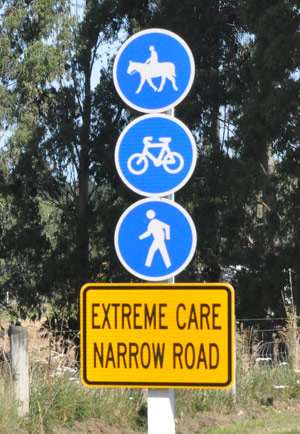 The median age of the main rider or handler involved in the incidents was in the 40s, with the majority (88.8%) female. Most had more than 15 years of equestrian experience on the road.

Rider/handler falls occurred in 16.7% of incidents. Similar to the horse injury data, 77.7% of riders or handlers did not sustain injuries, but 21.8% sustained mild to severe injuries, and 0.5% (21 people) died as a result of their injuries.

Most wore safety or protective equipment such as high visibility clothing (91.2%) and riding helmets (95.3%), but few wore body protectors (2.3%).

Although not always seriously injured, several reported that they, or those around them, were negatively affected by the incident.

One example: “Four offroad bikes ridden by young lads, two of which purposely revved up behind us which spooked the horse sending him backward. My daughter managed to grab him before we ended up in a ditch, the other two boys obviously scared, responded to my yelling at them to slow down and lower their revs. My daughter has now said she will never ride out on the roads again, which saddens me. My horse is just over 20 years old and has and will always be my rock, he is used to traffic including motorcycles, tractors etc. but he was shaking after this, I realise that no-one was injured but we are very shook up.”

Another case: “Driver come around bend on my side of road head-on at a horrendous speed well in excess of the speed limit. The driver then skidded his 4×4 which spooked my pony. The pony spun clockwise wise still on our side of the road as the 4×4 collided into us both. The driver then got out (of the) vehicle and verbally abused me before fleeing the accident without giving details. Riders are now frightened to ride this fast road since my accident.”

The authors noted that in a 2020 review of the current UK Highway Code, the British Horse Society has proposed the inclusion of explicit advice for vehicle drivers on how to pass horses safely on the road: passing widely (at least 2m distance) and slowly (a maximum of 15mph).

“However, this message requires further emphasis and dissemination within the driving community as it is likely that few vehicle drivers with existing licenses will read the updated version of the Highway Code.”

Pollard and Grewar noted that a considerable proportion of equestrians reported road rage by other road users, vehicles passing at close proximity and exceeding the speed limit in horse-related road incidents.

“Although the odds of collision-related incidents have reduced over time, driver awareness of how to pass horses safely on the roads in the UK is still lacking.

“Identifying ways in which to reach the wider vehicle-driving community, helping to change their behaviour around horses, and securing funding for such projects is necessary.

“The use of conspicuous high visibility clothing was associated with lower collision odds and is a simple step that all equestrians can take to make themselves and their horses more visible.”

The authors noted that loose horses contribute significantly to road-related horse fatalities. “However, free-roaming/feral horse incidents are severely under-represented and run the risk of exclusion from any future road law and policy changes.

“Horse fatalities and rider/handler injury are intricately linked,” they said, “and reducing the risk of injury to horses will serve to reduce human injury and loss of life.”