Horse sport’s world governing body has once again earned the IOC-Dow Carbon Action Award, which recognises the sustainability efforts of sports organisations within the Olympic Movement.

The FEI was among award recipients announced during last week’s International Olympic Committee (IOC) Sustainability Session at the annual International Federation (IF) Forum, which was held online for the first time this year.

Secretary General Sabrina Ibáñez said the FEI was extremely honoured to have received the award for the second time.

“The award puts a spotlight on the significant role that international sporting organisations like the FEI can play in driving global climate action and we are extremely pleased to see our efforts recognised by the Olympic Family.

“Sustainability is central to good governance and is a part of a solid business strategy in sport. The FEI plays a key role in motivating our stakeholders to focus on sustainability and the environment and it is only through our collective efforts that we can generate innovative green practices to reduce negative environmental impacts,” Ibáñez said. 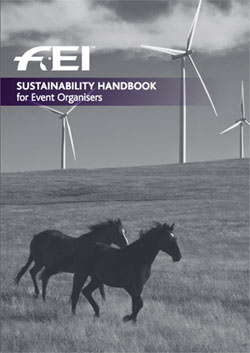 The FEI equips event organisers with the necessary knowledge to simplify the decision-making process around sustainability and the environment. In 2014, it produced the FEI Sustainability Handbook, which has become the guiding text for sustainable initiatives. This is a living document that provides a framework for Organising Committees to develop green initiatives and to share best practice from organisers around the world.

Work is currently under way to update the handbook to include an annex for self-evaluation that will allow each event organiser to measure and report on the impact of each of the environmentally friendly projects they implement during an event. Each initiative will earn the organising committee points that all count towards an overall sustainability score. This scoring system is a useful method to help organisers quickly determine their most sustainable options.

The FEI also encourages knowledge exchange between event hosts and the wider equestrian sport community and the FEI’s support in this area has increasingly led to organising committees undertaking their own innovative projects. One such example is the Helsinki International Horse Show, where all electricity used at the show was generated entirely from horse manure.

The FEI’s sustainability pillars includes initiatives at its Lausanne headquarters in Switzerland. As part of its Green Office Policy, the FEI has improved recycling practices by increasing waste separation, minimising single-use plastics and eliminating disposable cutlery and cups from day-to-day operations. The Federation had already introduced videoconference facilities to reduce travel. The pandemic has now provided further opportunity to review the necessity for travel and in-person meetings, and look at how to use those learnings to reduce the Federation’s carbon footprint going forward.

“The sustainability journey begins with small steps and this transformation happens from the inside,” Ibáñez said. “The goal is to focus on and be successful with the key initiatives selected, before moving on to the next stage of this perpetual process. As Olympic Family members, we have a real opportunity to lead by example and to show the world that sport can be an effective agent for long-lasting change.”

Launched in 2019, the Awards programme was created to encourage sports organisations within the Olympic Movement to work towards reducing their greenhouse gas emissions.

In a 2020 initiative, this year’s application process was open to the National Olympic Committees (NOCs) numbering more than 200 globally, as well as the 77 International Sports Federations (IFs).

The five National Olympic Committees of Brazil, Canada, Great Britain, Spain and Switzerland complete the list of 20 award winners for 2020.

The selected IFs and NOCs will receive carbon offsets, including a diverse set of climate solutions, from conserving ecosystems and avoiding deforestation to energy efficiency and renewable energy. The projects delivering these offsets were implemented across multiple continents including the Americas, Africa and Asia, and comply with standards approved by the International Carbon Reduction and Offset Alliance (ICROA).

To be recognised, IFs and NOCs had to be signatories to the UN Sports for Climate Action Framework, which was launched by the IOC and the UN Framework Convention on Climate Change (UNFCCC) in 2018. Applicants were also required to present detailed data on their 2020 carbon footprint, as well as information on their carbon management and reduction plans.