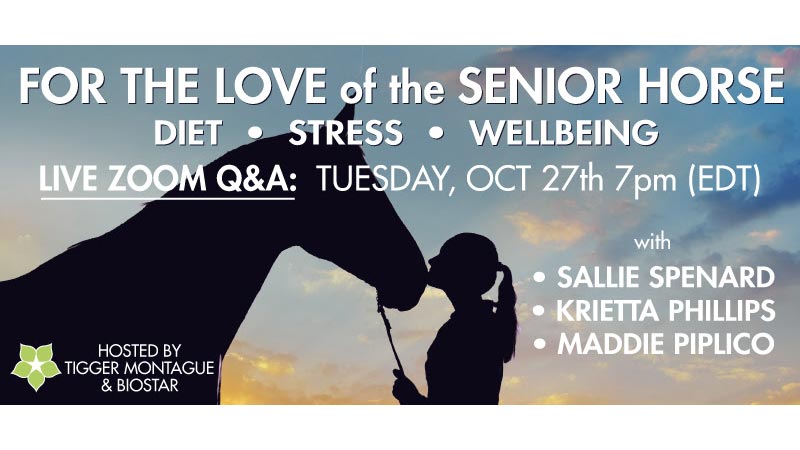 An equine bodyworker and two trainers are weighing in on a free webinar about senior horse care today.

The open panel discussion hosted by BioStar titled “For the Love of the Senior Horse” features advice from equine bodyworker, Krietta “Creepy” Phillips, and trainers Sallie Spenard and Maddie Piplico. It is being hosted by BioStar’s Tigger Montague.

» Register for the webinar, on Tuesday, October 27, at 7pm (EDT). A replay will be available on BioStar’s YouTube channel afterwards.

Krietta “Creepy” Phillips became an equine bodyworker as a second career after retiring from 30 years of classroom teaching. Having grown up in an Olympic ski family, Creepy has been a lifelong competitor, from skiing in the Saab Pro Mogul Tour to competing as a nationally-ranked triathlete, and riding as a junior in the Medal and Maclay Equestrian Finals, she is no stranger to sports physiology. She works on all kinds of horses to release tensions and stagnations in the body so that they can feel their best.

Sallie Spenard grew up in Southern New Hampshire. Her parents raised Welsh Ponies and she had her first pony by age 3. She was in pony club and started eventing at 10 and participated in Young Riders in 1980. She switched to dressage in 1991, training her own Trakehner gelding to Grand Prix. Since that time she has trained many horses to FEI level with another Grand Prix horse under her belt.

Madeline Piplico started riding in early childhood in her hometown of Alexandria, Virginia. She worked at farms all through high school and college, riding any horse she could, and ultimately fell in love with dressage. After college, she worked as barn manager and rider for Tim Ober at his rehab farm. This position provided her with an in-depth knowledge of biomechanics and how to work a horse for fitness and soundness. She is a USDF bronze and silver medalist and is still an active competitor through her current role as the trainer at Afton Stables.