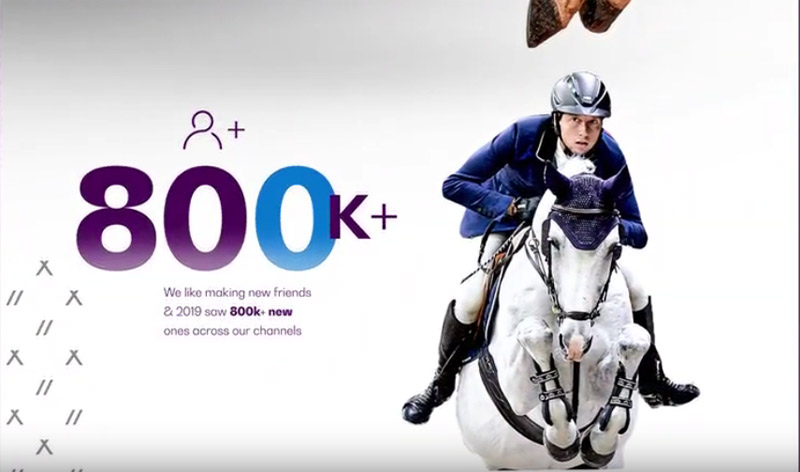 Equestrian sport’s fan base appears to be growing, with the FEI reporting record engagement across various media streams.

The figures released by the world governing body in its 2019 annual report point to a strong appetite among followers for horsemanship-related content, especially videos.

The FEI says building a global fan base is crucial to the long-term development of the sport.

“Through digital platforms and tools, we are able to reach more individuals than ever before, but we still need to get their attention and retain it, as the global sporting and entertainment industry is competing for the same audience,” it says.

It says 2019 would have been expected to be a quieter year on digital platforms, with no World Equestrian Games that year and a year to go before the (now postponed) 2020 summer Olympics.

However, it proved to be a record-breaking year, comfortably outperforming 2018 in terms of eyeballs reached and fan engagement.

The FEI said there were 530 million impressions across all digital channels.

Fans watched the equivalent of 222 years of video on YouTube alone. Analysis showed that 22% of the YouTube videos published were horsemanship-based, accounting for 46% of overall views, 68% of watch time, and 51% of engagement.

The FEI also reported a 49% increase in the number of unique visitors to FEI.TV, with the average days subscribed growing 273% to 362 days. It says the platform continues to grow steadily. The content offering has been diversified and better categorised across the FEI disciplines.

The world governing body said more than 9.5 million fans engaged with the FEI in 2019.

Visitors on the fei.org stories pages rose by 51%.

The organisation said 800,000 “new friends” were engaged across all channels, representing a 171% increase since 2018.

In all, 2.17 million people were following the FEI social channels.

It singled out Giphy for special attention, saying it had generated more than 110 million views in just 11 months.

The FEI said broadcast viewership was also on the rise.

It said there had been growth in “media value” for most of the FEI Series in what it described as a very challenging market.

There was a 32% increase in viewership for the Longines FEI Jumping World Cup season for 2018/2019, compared to the previous one.

“Part of the success was the new strategy put in place of supplying customised news clips to relevant broadcasters, hence boosting the distribution across several territories.”

It said the Longines FEI Jumping Nations Cup in 2019 was also extremely successful from a broadcast perspective, with overall growth seen across all key performance indicators for TV performance in comparison to 2018: a 33% rise in TV audiences worldwide, a 96% lift in broadcast hours, a 90% increase in news audiences due to custom news packages, all adding up to a 30% rise in media value.

For the FEI Dressage World Cup 2018/2019 season, the global viewership also increased by 21% compared to the previous one.

“For the new upcoming season, focus will be on continuously growing media distribution and tapping into emerging markets such as North America, China and India to increase the viewership, while upgrading the production standards across the main events and series.”