A remote area of Argentina has been home to curly Criollo horses for centuries. Curly coats were unknown among the horses that the Spanish took across the Atlantic in the 1500s. Where did this curly coat come from? Is a previously unknown genetic mutation behind it? Curly horse enthusiast Dr Mitch Wilkinson traveled south from the United States in the first steps towards getting answers.

All horses are special and all horses have a fascinating history, but the mysterious curly-coated horses around the world have a truly intriguing history and science which I have had the good fortune to be involved with for the past two decades.

I recently traveled to Patagonia at the invitation of Dr Gerardo Rodriguez and his wife, Andrea, to gather hair follicles and whole blood samples for analysis by Professor Emeritus, Dr Gus Cothran at Texas A&M University’s Equine Genetics Laboratory, under the direction of Dr Rytis Juris. 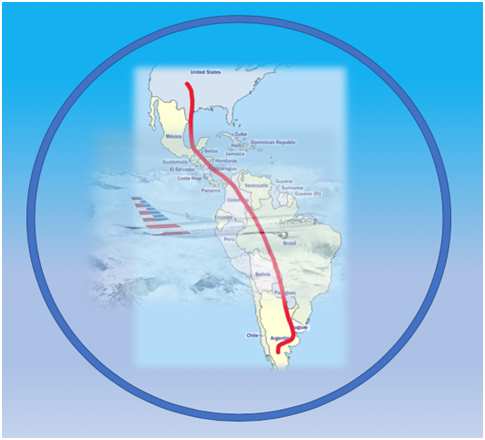 We traveled to a remote part of Argentina and stayed in the village of Maquinchao in the Rio Negro province of Patagonia.

Maquinchao is located near the Somuncura Plateau. This almost completely uninhabited area was declared a National Protected Area by the Argentine government in 1993.

The Somuncura Plateau is the home of unique species of plants and animals found nowhere else on Earth, and as you have probably already guessed, it is the home of a unique type of wild curly horse.

To be clear, the gene mutation which causes the distinctive winter curly coat on these Argentine equines is different than the mutations that cause curly coats in North American horses.

The two populations do have a strong Spanish heritage in common, but these wild curly horses of the Somuncura Plateau are unique, rare, and have curly winter coats caused by a different mutation. There is a possibility they are unique to the region and found no other place on earth.

Geologists describe the Somuncura Plateau, where these horses live as an “Island of volcanic rock on dry land”. It covers about 15,000 square kilometres. It is almost completely uninhabited.

One of the unique animals found on or near the Somuncura Plateau is the guanaco.

The guanaco is a medium-sized camelid related to South American llamas and alpacas. It is more distantly related to the Dromedary and Bactrian camels found in Africa, the Middle East, and Asia.
Camels, like horses, began their evolution in North America 35 million years ago.

North American camels survived until the more recent geological past, but sadly are now gone. Their extinction in North America is still a mystery like that of the horse.

However, four species of camel managed to survive until the present in South America. They are llamas, alpacas, vicunas, and guanacos.

Another animal is a large, flightless bird distantly related to the ostrich and emu. It is the called the rhea, and is a native inhabitant to the Somuncura Plateau.

In this area, the species of rhea known as Darwin’s rhea runs across the volcanic landscape eating grasshoppers and lizards.

The gauchos traditionally hunt rheas on horseback with bolas. The rhea is a species native to Patagonia. Both rheas and guanacos share the Somuncura Plateau with the wild horses.

However, to tell the story of these horses, we must go back several hundred years to the Spanish re-introduction of the horse to South America.

In 1535, Don Pedro de Mendoza, the conquistador and governor of the Spanish colony which would eventually become Argentina, was given the task by the king of Spain to administer and form a colony within the lands of the La Plata River region claimed by the Spanish crown in central South America. Mendoza’s administrative charge included the drainage area of the La Plata River and the new colony of Buenos Aires to which Mendoza brought both work and fine warhorses directly from Spain.

Initially, there were about 100 horses imported. The stallions were especially fine animals, who came directly from breeding farms in Cadiz, Spain.

After half a dozen years of mistreatment of the native people by Spanish colonists, Buenos Aires was destroyed and burned in 1540 by indigenous tribes.

The Spanish fled the area and left somewhere between 12 to 45 horses behind.

Records do not indicate what type of horses were abandoned. Some may have been common workhorses, while others may have been fine warhorses and gentlemen’s mounts. It is thought they were probably a mixture of both.

Under favorable conditions on the pampas, the escaped horses adapted and reproduced portentously. The descendants formed herds of hundreds of thousands of wild horses known as “baguales”.

The Spanish did not return until 1580.

In the 40-year absence of the Spanish, two remarkable things happened to the abandoned horses. They multiplied and some developed curly winter coats.

Currently, studies of undisturbed wild horse populations in Australia show that a herd of feral horses under favorable environmental conditions have about a 25% yearly growth rate.

Because of the exponential growth pattern, by 1580, 40 years later, the number of horses is estimated to be in the thousands. Even if only 12 horses were left by the Spanish, there could have been up to 36,000 free-roaming horses upon their return. This is exactly what the second wave of Spanish conquistadors observed upon their return in 1580, but something unusual was also observed.

The Spanish observed that some of the feral horses had developed a curly coat. Horses with curly winter coats were unknown in Spain.

The term “Criollo” was applied to humans and animals. It originally referred to individuals of pure-bred Spanish ancestry born in the Americas. With the return of the Spanish to the Rio Plata area, new horses from Spain were imported and these were mixed with the now feral Spanish horses to become the Criollo horse of South America. Both in the wild and in domestication, Criollo horses thrived in Argentina, Uruguay, and Southern Brazil.

Records show that in 1739, the Spanish explorers Cabrera and Solanet wrote in their journals that they had observed curly-coated wild horses mixed within the wild horse populations of Argentina and Brazil. This was two centuries after the Spanish re-introduction of the horse to South America.

Forty years later, in 1781, about the time the United States was fighting England for its independence, a Spanish military engineer and naturalist named Felix de Azara was assigned to the Rio Plata area.
Azara was to spend 20 years in South America, from 1781 to 1801. During this time, he extensively explored this part of South America from Buenos Aires.

Azara’s excellent drawings of plants and animals along with his written accounts were some of the first literary works to reach the general public about the wonders of South America. In 1801, his observations were published in Paris in book form under the title Quadrupeds de Paraguay. Within the pages of the book, he describes his observations of curly-coated horses seen within some of the wild herds he witnessed.

Eighty years later in 1886, Charles Darwin in his publication The Variation of Animals and Plants under Domestication, cited Azara’s observations of horses.

Darwin used the curly-coated Spanish Criollo horses as observed by Azara to be a classic example of adaption by natural selection.

Darwin reasoned that a random mutation occurred within the feral population that resulted in a type of horse favored by natural selection to thrive in this New World environment. Darwin was undoubtedly correct.

On Darwin’s two voyages to South America, he traveled extensively by horseback. He was disappointed he never observed curly-coated horses in wild herds. Had they disappeared?

In 2010, a curly horse breeder in Texas, Angie Gaines, was contacted by Dr Gerardo Rodriguez about curly-coated horses he had found and started breeding. Dr Rodriguez is a former military officer and a veterinarian. He had captured the original horses on the Somuncura Plateau.

Gerardo was introduced to curly horses by an Indian gentleman, Enrique Piehincura, who was living an isolated existence near a water hole on the Somuncura plateau. Unfortunately, due to global warming, the water has disappeared. Enrique was forced to move and the fate of the wild horses that included curly horses is unknown. They seem to have disappeared into the Somuncura.

There were challenges in collecting samples of blood and hair follicles from the horses of Dr Rodriguez during our expedition south. Some of the horses had been handled quite a bit while others were quite fearful. Thanks to the excellent horse handling skill of the gauchos present, all the curly horses were sampled without injury. As you can see, there were some intense moments.

At the time of the writing of this article, the gene mutation that creates the curly winter coat in these Patagonian curly horses has not yet been identified.

In early 2020, a preliminary dendrogram was produced using the PHYLIPanalysis Program. PHYLIP stands for PhylogenyInferencePackage. This package of 35 programs was developed by the University of Washington for the purpose of “inferring” the genetic relationships between animals and constructing genetic relationship trees or dendrograms.

The limited number of individual horses sampled hampered the results. However, the preliminary results show that instead of these horses being related to the iconic horses of Southern Spain like the Andalusian and the Lusitano, they were related to the smaller Celtic type horses located in the Northern Iberian Peninsula.

The Patagonian curly horses were genetically close to the Mexican Galiceno horse, which is thought to be a descendent of Northern Spain’s Celtic type horses brought to the Yucatan by Cortez during his conquest of the Aztec nation.

The Galiceno horse is a much smaller horse than the Patagonian curly horses, standing between 12 to 13.2 hands. There are fewer than 100 Galiceno horses in the United States and Mexico.

Other relationships were established by the dendrogram. Patagonian curly horses have a close association with ancestors of the Galiceno horse, which are the Portuguese Garrano and the Spanish Galician and Asturcon. 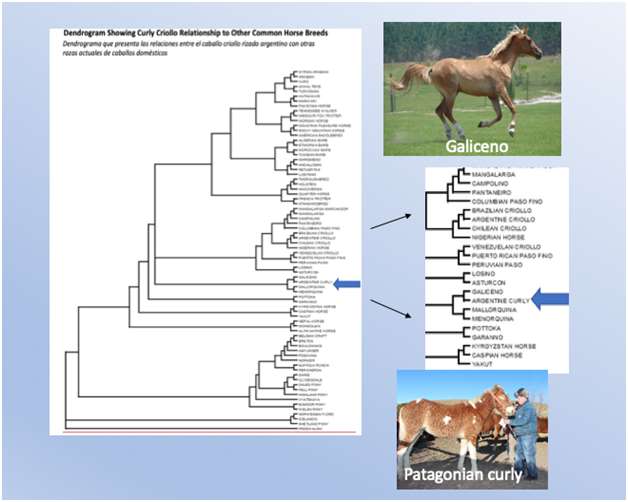 Because of isolation and different human and environmental pressures on the population, the horses of the Somuncura, whether curly coated or not, differ from the typical Argentine Criollo. They may represent an older Criollo type.

The fact that the Patagonian curly horses are not small; they range from 14 hands to 16 hands, show that other larger types of horses have bred into the population making them different from their Northern Spanish Celtic ancestors.

The Patagonian curly horses retain enough of their Northern Spanish Celtic genetics to pair close to these horse breeds.

Current efforts are being made to ask the Argentine government’s help in preserving what is left of the unique curly-coated horses of the Somuncura Plateau. Let’s hope they are successful.

Dr. Mitch Wilkinson has been a lifelong horse enthusiast. After receiving a bachelor’s degree in chemistry and professional dental degrees, he earned a post-doctoral master’s degree from Baylor University in biology. Currently, Dr. Wilkinson is Chairman of the Curly Mustang Association and Vice-Chair of the International Curly Horse Organization’s Research Department and the current coordinator of research for the Sulphur Springs Mustang Registry.