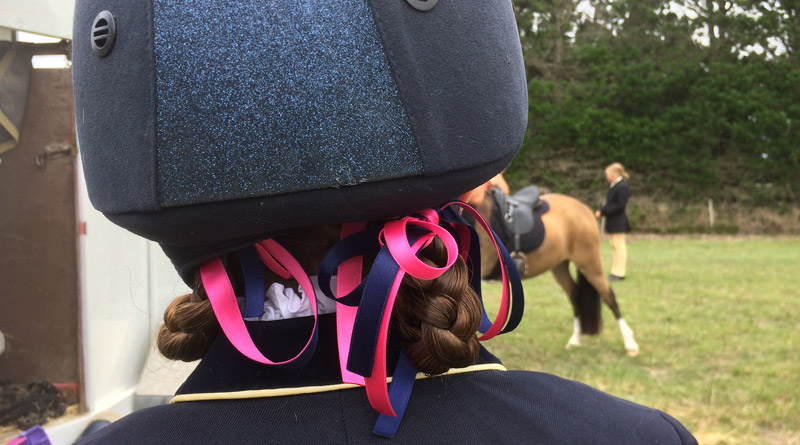 Filippo Pozza, the owner of horse-riding equipment manufacturer JS Italia, outlines different methods of riding helmet manufacture, and explains his preference for those with a fiberglass shell.

The helmet is the most important piece of equipment for horse riding. It must, by law, conform to specific standards.

Here, I am hoping to clarify things and help out those looking to buy a new piece of protective equipment.

What is the main function of a helmet? For many people, a helmet’s main function will be absorbing
impact energy. This is understandable, given that approval standards have always focused on this one property in particular.

However, while this is certainly a very important aspect, it should also not be the only thing to consider.

During official crash tests, force, angle and position of impact energy are defined and specified according to very precise parameters.

That said, these impacts occur in controlled laboratory conditions and are limited by the helmet’s size restrictions and design.

So, what actually happens when a helmet is subjected to a strong impact?

Even helmets that pass the most stringent shock absorption tests have limits, which means overcoming them requires a different trait. That is, a helmet’s ability to bounce off obstacles and slide along irregular surfaces, thereby reducing the chances of it becoming stuck to a minimum. This effect is known as “glancing off ability” or “sliding ability”. It works to reduce the force of the impact, even up to as much as 40 percent.

Every helmet should possess the proper attributes to assist sliding, using an evenly smooth shell with no materials or other objects that would prevent it from doing so. Otherwise, this could lead to a dangerous helmet that may lock in place and cause damage to the cervical vertebrae.

There are various types of helmet available on the market, each with different features.

In-mould helmet:  This a helmet with basically no actual outer shell. It is mostly made of polystyrene foam and coated with an incredibly thin protective plastic film.

Easy and relatively cheap to produce, this type of helmet is undoubtedly a more affordable item.

However, not many manufacturers choose this method, due to purely technical reasons: it is a compromise in production, which will be expanded on below.

With in-mould helmets, the polystyrene carries out two simultaneous functions. Firstly, it has to stop blunt objects from penetrating the helmet, which means it needs to be hard and highly dense.

As for the inside, the only part specifically intended for shock absorption, the polystyrene needs to be as
soft as it can be and have low density, so that it can collapse and absorb as much kinetic energy as possible. It is easy to see how this is a compromise in terms of safety, as a single material is required to perform two opposing functions. In-mould helmets are very light and usually suited to sport
activities such as biking, where the weight of the helmet is always a crucial factor.

This type of product usually has a brief lifespan, as the coating material tends to lose its mechanical properties over time, due to weather conditions, sun exposure (UV rays) and chemicals that can easily break down all plastics.  It is for this reason that we do not recommend applying unsuitable
stickers and paint, only those used or suggested by the manufacturer, so as not to damage the headgear.

ABS (plastic) helmet: This headgear is made up of two quite distinct parts: the outer shell and the inner polystyrene layer. This is a more well-structured, high-performance kind of helmet.

The outer shell is made of a high-impact resistant polymer, ideal for effectively protecting the head from objects that might penetrate the surface of the helmet itself. It is advantageous in regard to both its production time and fairly low cost; it lends itself to creating complex shapes during the moulding phase, needing only to be processed for a few minutes.

For this helmet type, the shell is generally lightweight, yet it should be up to three times heavier and thicker to guarantee the same overall performance of a fiberglass one.

The disadvantage of this more technically manufactured shell version is that its mechanical and physical properties vary according to temperature. At low temperatures, the plastic tends to crack and become fragile on impact; at higher temperatures, on the other hand, it becomes soft and flexible, thus altering its own performance.

This negative side effect is especially noticeable during the summer months since the outer portion of the shell can easily reach even 50 degrees Celsius. In these conditions, the shell becomes very soft, which in turn leads to reduced effectiveness during a crash.

In addition, as with all plastic, it tends to degrade under the sun after just a few years.

In these helmets, the polystyrene generally has a lower density (is softer), making it easier to absorb impacts more efficiently.

Fiberglass helmet: This is the best kind of helmet on the market, in my view. It is made up of two distinct components that provide excellent performance.

The fiberglass shell (pictured, A) is unaffected by temperature, chemicals, solvents and UV rays. Its mechanical properties remain consistent over time. It is abrasion-resistant, more evenly distributes impact energy and greatly protects the head from any blunt objects that might penetrate the helmet.

It is the number one choice for making a truly safe helmet but, most importantly, it allows manufacturers to use much softer polystyrene foam (B) for its core.

The softer the polystyrene, the more energy it can absorb, thus protecting against any brain damage.
This is the advantage of having a composite fiber shell.

Regarding the strap, as you can see from the picture (C), the rear attachment point was deliberately placed high on the back of the head in my company’s helmets. This was done to eliminate roll-off — that is, to stop the helmet from rotating and ensuring it does not break the bridge of the nose in the process, as is unfortunately so often the case.

For all these reasons, JS Italia chose this type of helmet.

We should, however, make one thing clear for all users: there are no helmets designed to break on impact during an accident to disperse energy. It is important to point out that a helmet breaking, with subsequent partial loss of cover in case of impact, can only be considered a design flaw.

Just think of how serious the consequences could be if helmets were to break on collision: the head would be at least partly uncovered and thus exposed to the grave risk of slamming into any kind of obstacle.

A helmet might get damaged, but its wearer’s head should never be left uncovered.

I hope I managed to shed some light on what the features of a safe helmet should be.

It is also worth remembering that all approval offices establish only minimum safety benchmarks. It is up to manufacturers to decide how far they wish to go.

JS Italia has passed five such approval tests. Nevertheless, it isn’t really the number of these you should be looking at, but rather the way in which they were completed. Doing so, however, does require asking for the laboratory tests carried out on each individual helmet model.

Successfully undergoing multiple type approval tests can be a boon for manufacturers, as they can then sell their products in countries with different safety benchmarks, but it does not necessarily mean they are actually safer.

We hail from the motorsport industry, where speeds are much higher and where safety truly does take the top spot.

One thought on “Guide to choosing a horse-riding helmet”