More than 200 cases of Equine Influenza (EI) have been confirmed by laboratory testing in Britain so far this year, compared with just two outbreaks reported in 2018.

Dr Richard Newton, The Animal Health Trust’s Director of Epidemiology and Disease Surveillance, said the effect of increased horse movement and mixing of horses at events in the summer was a contributing factor.

The latest three cases were confirmed on July 10 and 11.

On 10 July 2019, The Animal Health Trust (AHT) confirmed outbreaks on premises in West Yorkshire and West Midlands. The laboratory confirmed that both were positive and in non-Thoroughbreds with an unconfirmed vaccination status that presented with coughing, nasal discharge and pyrexia. Several other horses at the West Yorkshire yard were reported to be showing clinical signs and the in-contact number was unknown. The positive diagnosis was confirmed by a nasopharyngeal swab.

On 11 July 2019, an outbreak of EI was confirmed in Pembrokeshire, with positive test results in two unvaccinated non-Thoroughbreds that presented with coughing, nasal discharge and pyrexia. There are two other horses displaying clinical signs, with a further five in contact.

“Alarmingly the number of outbreaks of Equine Influenza continues to rise and are likely to continue week-on-week for the foreseeable future,” Newton said.

“We applaud those horse shows and events which have made vaccination mandatory, have arrangements to check passports and enforce the rules”.

Newton said the AHT encouraged event organisers to make vaccination mandatory, and to ensure the decision is communicated in plenty of time ahead of their event to allow owners the time to properly vaccinate their animals.

The advice from the AHR to horse owners remains the same; remain vigilant to the clinical signs of flu, boost the horse’s vaccination if it was given more than six months ago and importantly isolate new arrivals on the yard and those returning from shows.  It is important that horse owners also practice good biosecurity at their yard and when out competing. 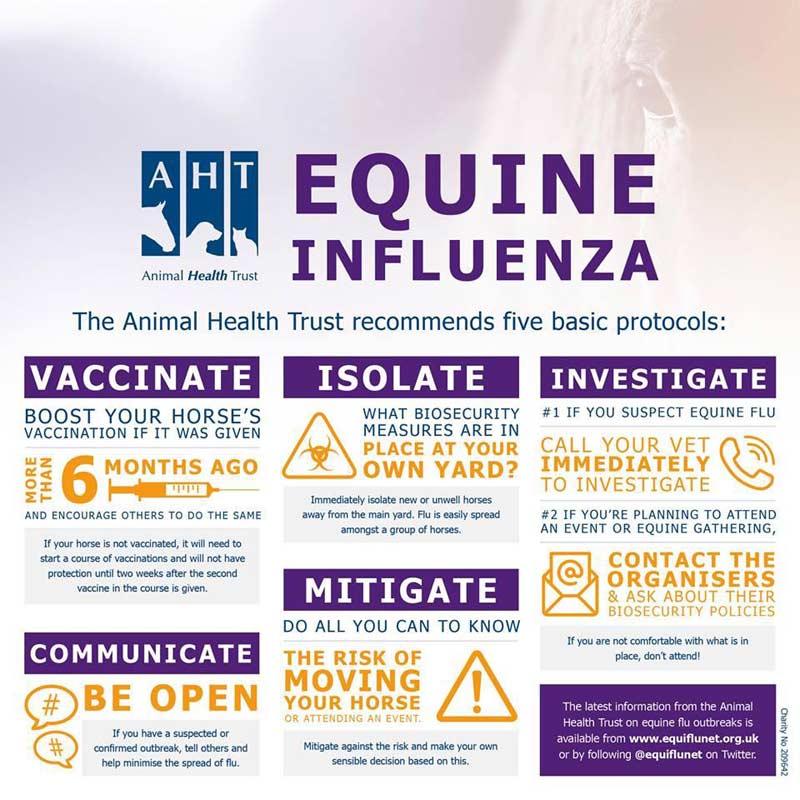