Endurance cheats are likely to find the terrain ahead much more difficult if the wide-ranging proposals unveiled today by the Endurance Temporary Committee are implemented.

Ideas include the possibility of tests on horse hair, which will be able to detect longer-term abuse of drugs such as anabolic steroids, possible out-of-competition drug testing, and mandatory post-mortem examinations where catastrophic injuries occur.

The chair of the committee, Dr Sarah Coombs, told delegates there was no future for international Endurance within the FEI if everything stayed the same.

“We have no automatic right to practice equestrian sport on an international stage, especially in these days of social media and instant news around the world. We have to bring about positive change if Endurance is to survive within the FEI.”

The committee was appointed last October by the FEI in a bid to find solutions to ongoing welfare issues and reputational damage to the discipline, much of it arising from the fast-style desert racing centred on the Gulf region.

There have been concerns around the rate of catastrophic injuries to horses, drug infractions and poor horsemanship, ranging from poor tack to other welfare and horse-abuse issues.

All of today’s sessions at the forum were devoted to Endurance.

At the heart of the day were sessions that outlined proposed improvements and innovations to reshape Endurance, and to improve the standards of officiating, with many viewing poor enforcement of the current rules as a central part of the discipline’s problems.

All of the forum’s seventh session was devoted to a series of changes which effectively aim to return the discipline to its roots, with the presentation being given by Coombs, FEI veterinary director Göran Akerström and Professor Tim Parkin, another member of the committee whose research into Endurance injuries has guided the panel in its decision-making.

The committee’s proposals include more effective drug sanctions, which will include extending suspensions on horses to include owners.

“Everyone in this room has to agree that the level of drug abuse is unacceptable,” Coombs said.

“For me it is the underlying factor in a lot of the issues that we see and we have to all agree that it has to be stamped out.”

The trio, in their presentation, pointed out that positive drug tests painted a similar picture, with certain classes of drugs dominating – for example, a mix of classic painkillers and nerve-blocking agents.

They presented 2017 results for drug tests on Endurance horses.

In FEI Group 7, which covers the Gulf region, 215 horses were tested, yielding 28 positive results, which amounts to 13% of the horses tested.

Information given to the committee indicated that some horses are treated with anabolic agents during their build-up period, are presenting with too low heart rates in relation to their speed, are nerve-blocked before or during the event, and are given micro-doses of heart-rate lowering substances before the vet gate.

Some, they said, are being trained on painkillers.

They proposed that post-mortems become mandatory for all fatalities, with no exceptions. All parties connected with the horse would face sanctions if the post-mortem is avoided.

The committee members noted that three ongoing horse abuse cases in Endurance are based on the findings of post-mortems.

The committee proposes that qualification from 1* to championships be based on capped speeds and completion percentages, with “free speed” only an option for those with a completion rate of 66% or over.

Crews should be limited to three in crew areas, the committee says, reinforcing the responsibility of the athlete. They noted that excessive crew numbers can be used to crowd a horse and prevent scrutiny by officials. It can also lead to overcrowding and risk of injury.

Trainers must be aged at least 18 and the substitution of another trainer would not be allowed after the date of entries. When a horse has a change of registered trainer, the horse will not be permitted to compete for 30 days.

The minimum rider weight will be reduced to 70kg for senior rides of 2* and above, regardless of the athlete’s age.

The maximum number of starters will be set at 200, subject to the venue and an appropriate ratio of competitors to officials, with a maximum of 400 starters per day.

The trio told delegates that heart-rate parameters and presentation times, based on evidence from the Global Endurance Injuries Study, supported a rate of 60 beats per minute coupled with a presentation time of 15 minutes.

It is proposed that, for venues where for the last three years the top 10 finishers had an average speed of 20kph or greater over the same distance, 60bpm and 15 minutes shall apply for all vet gates, with a presentation time of 20 minutes at the finish.

For venues where for the last three years the top 10 finishers had an average speed of less than 20kph, the existing rules regarding heart rate and presentation times would apply.

At the first vet gate after the halfway point in a ride, horses that present with a heart rate greater than 64bpm at the first presentation will not have the chance to re-present and will be eliminated on metabolic grounds.

The committee also proposed a new approach to the implementation of rules on the basis of horse welfare: Where a rule change is judged to have a clear potential benefit to horse welfare, the FEI Board should require changes to be made if there is a chance that this could make a positive difference.

Dealing with poor tack and horse abuse, delegates were told that problems in this area had been a serious cause of horse welfare issues and had contributed to a poor public image for the discipline. Such breaches, they said, pointed to poor horsemanship.

They said specific recommendations regarding permitted tack and equipment should be introduced to bring Endurance in line with other disciplines. 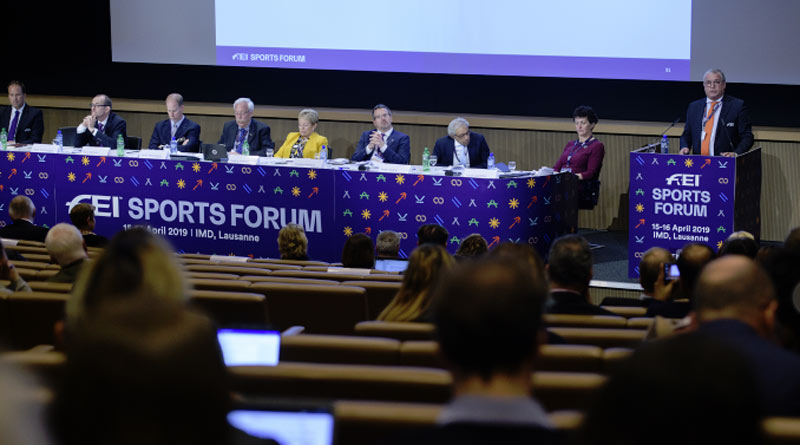 Further, they said the time for reporting rule violations should be extended to 12 hours for making an objection, and then 24 hours to provide evidence.

Sanctions for horse abuse needed to be heavier, and suspensions needed to be served within the competitive season of those involved.

The committee also proposed increased sanctions for removing a horse from the field of play, rising to a six-month suspension plus 80 penalty points for a first infraction.

Further changes were proposed around visible blood and the designation of catastrophic injuries.

Focus on education of officials

An entire session was devoted to educating officials and correct application of the rules.

A series of recommendations on education and officials had been signalled ahead of the forum. Proposals, some of which are already in train, include:

Endurance Temporary Committee member Pieter Wiersinga addressed the issue of integrity and leadership by focusing on the Code of Conduct for FEI Officials and the correct and robust application of the rules.

The proposals, he said, centred around the appointment and rotation of officials, improved training, reinforcement of the role of the independent governance advisers, a stronger follow-up system for officials’ reporting to the FEI, and tackling corruption.

“Endurance has a positive future,” he told delegates, “provided the unacceptable behaviours of a few in the community are addressed and rectified.

“It’s sport practised in a fair way giving access to all, from beginners to the most experienced and talented athletes, and placing the emphasis on the partnership between an educated rider and a well-trained horse.”

The FEI’s director of education and officials, Frank Spadinger explained the principles of the FEI’s new proposed Endurance Education System, which is pending approval.

FEI Endurance and Driving director Manuel Bandeira de Mello spoke about the appointment of officials, and the FEI’s support and supervision of these officials.

In future, and in line with existing rules, the appointment of officials will be done by the FEI in consultation with the Endurance Technical Committee and the Organising Committee. Clear selection criteria based on integrity, competence and English language skills will allow for better officiating performance and a level playing field.

He also spoke about officials’ reports, with plans for an enhanced reporting system aimed at improving accurate reporting based on a better follow-up system and confidence among officials.

FEI legal director Mikael Rentsch talked about existing sanctions under the anti-doping rules, and also sanctions for horse abuse and under the new Hyposensitivity Control System.

The possibility of extending a trainer’s suspension to include all of his/her horses was discussed, with the legal director emphasising that the principle of proportionality must be respected in all sanctions.

Final draft rules proposals from the Endurance Temporary Committee will now be developed and sent to national federations and stakeholders by July 8, with any feedback required by August 30.

Final draft rules will be published on October 22, and these should go to the FEI General Assembly in Moscow in mid-November.

FEI Secretary General Sabrina Ibáñez told delegates as the day wound to a close that she, on behalf of the FEI, had acknowledged during last year’s General Assembly in Bahrain that the FEI had made mistakes at the World Equestrian Games in 2018.

The FEI Board had also acknowledged that there had been mistakes, she said, and had made a financial contribution to each national federation that had an Endurance athlete in Tryon. “We made mistakes and we apologise for that,” she said to applause.

Earlier, Coombs had also received rousing applause for her call for support for the Endurance Temporary Committee recommendations.

“The FEI works as a collaboration of national federations which is based on respect and trust for each other and, above all, built on a shared respect for the horse. Without mutual respect between the Endurance community and the FEI our sport has no future.

“If we are to take our discipline forward within the FEI we have to rebuild trust and respect on both sides. This will require strong leadership, respect for Endurance as a rapidly evolving discipline, respect and integrity from all the competitors, trainers and owners. Above all of this, respect for the horse, who can only give of his best if his well-being is respected.”