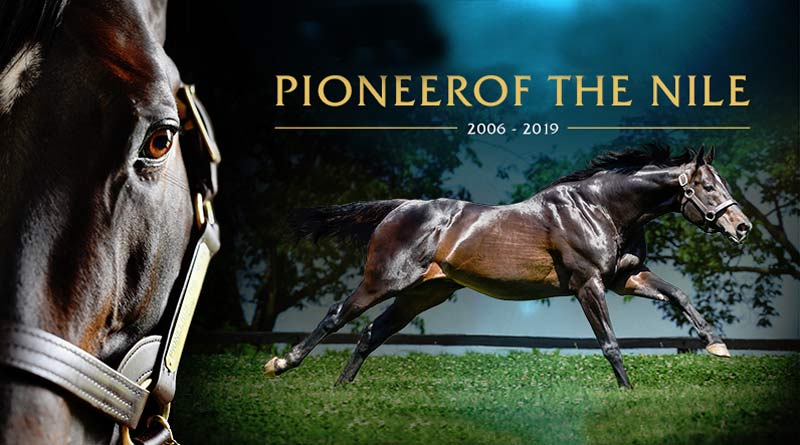 Triple Crown sire and group one winner  Pioneerof the Nile has died suddenly at the age of 13 at WinStar Farm in Versailles, Kentucky.

The farm reported that the sire of 2015 Triple Crown winner American Pharoah bred a mare on Monday morning and then “started acting uncomfortable” once he was back in his stable. He died en route to a veterinary clinic.

A cause of death has not been reported.

“We are all extremely saddened by the loss of Pioneerof the Nile,” said WinStar Farm’s Elliott Walden. “He was a superior physical specimen, a Triple Crown sire, and a unique personality. All of us at WinStar are heartbroken.”

The leading money-winning son of Empire Maker and heir to the classic Fappiano sire line, Pioneerof the Nile won four consecutive Graded stakes, including the $750,000 CashCall Futurity [G1] and $750,000 Santa Anita Derby [G1]. Runner-up in the Kentucky Derby [G1] in his first start on dirt, he excelled on all three surfaces – dirt, turf, and all-weather.

“He was not only my first homebred he was one of my greatest,” Zayat said. “He was the proud father of American Pharoah and a true sire of sires. Pioneerof the Nile will be greatly missed by all of us here at Zayat Stables and by all of the racing and breeding world. Thank you to Bob Baffert for training him, thank you to WinStar Farm for standing him and caring for him these last years. He is gone way too soon, but never to be forgotten. It truly does take a Pioneer.”