A just-released book by Newmarket farrier Dr Simon Curtis brings together 10 years of research into the equine hoof. 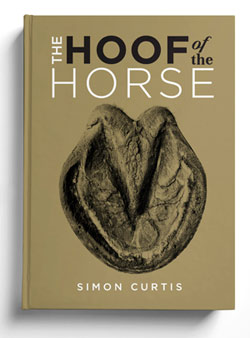 As a farrier in Britain’s racing capital for more than 45 years, Curtis gained a PhD for his research on horse’s hooves and shares many of his thesis findings in The Hoof of the Horse. Much of the information it contains has not been published elsewhere.

The Hoof of the Horse takes readers on a journey tracing the development of the equine hoof, from its beginning in the mare’s uterus all the way to maturity and old age. It is written in three sections which explore the physical nature of the hoof; the five ages of the hoof; and affects on the hoof.

Aimed at farriers, horse owners, and veterinary professionals it includes 250 colour illustrations, showing the hoof as it has never been seen before.

“We all know that the hoof is an extremely important part of the horse, and hoof health is the greatest factor in a horse’s soundness,” Curtis said.

“There has not been enough simple science applied to help us get the best from our horses’ hooves. My book addresses this problem, looking to improve knowledge and, ultimately, hoof care.”

In addition to his contributions to farriery as an author, writing four books and being published in numerous journals, Curtis has also lectured and demonstrated farriery in more than 20 countries on six continents. He is a visiting lecturer at the University of Cambridge and is the only farrier to have been awarded an Honorary Associate by the Royal College of Veterinary Surgeons.

Curtis is also a Past Master of the Worshipful Company of Farriers and previously Chairman of the Farriers Registration Council. Other accolades include his induction to the International Farriers Hall of Fame; being awarded an Honorary Fellowship of Myerscough College; and gaining his Doctoral degree in Equine Biomechanics and Physiology.

In 2018 he was awarded the Sir Colin Spedding Award by Princess Anne, for his outstanding contributions to the equine industry. He continues to practice farriery, teach and write for a worldwide audience.