A pioneering horse vet who was at the forefront of several landmark equine health and welfare developments in the sport horse world has published his memoirs on his time in the industry.

When Irish veterinarian Alex Atock, 86, began his first job in regulatory veterinary medicine as a racing official, he would not have guessed that one day his lifelong affection for horses would impact how horse sports are conducted worldwide, and that his advocacy for their welfare would improve their treatment near and far.

As a pioneer of international equine health regulation and welfare for several organizations such as the FEI, World Horse Welfare, the Irish Turf Club and the UAE Equestrian and Racing Federation, Atock initiated programs and wrote policies still endorsed and followed by regulatory veterinarians and stewards around the world.

Now retired, Atock has put away his passport, and picked up a pen. 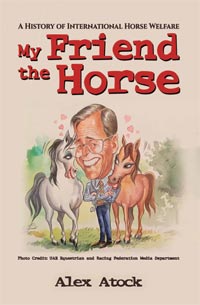 In him memoir My Friend the Horse, Atock talks about his time as head of the veterinary department at the FEI and as Official Veterinarian Officer for racing and endurance in the UAE.

His role made him the top-ranking advocate for the horse on the global stage. His assignments from his employers and the racing and veterinary associations he served ranged from determining how disease outbreaks affect the movement of horses around the world, and how traveling horses may put others at risk, to affecting improvement of conditions for the sport of endurance in the UAE, establishing the first horse inspections at international equestrian events, strategizing the welfare effects of summer heat at the 1996 Atlanta Olympic Games and many welfare and safety aspects of sports conduct that are now taken for granted.

Atock’s professional memoir is published at a time when horse sports and racing are under both public and internal pressure to protect horses, while making sports more accessible or spectator-friendly. Many matters related to medication and welfare of horses remain to be resolved, and Atock’s insight into how some current issues began or were addressed in the past is important for the sport.

Equally compelling are his views and experiences in the monitoring and control of equine disease, which affects how, when and if racing and competition horses can move between countries and, eventually, be allowed to return back home.

Many major decisions and actions were taken on his watch, such as the FEI’s inauguration of horse inspections at the Moscow Olympics in 1980, followed by inspections at the World Jumping Championship in Dublin in 1982. The resulting furor turned many against the FEI and Alex Atock. Fast forward to today, when mandatory horse inspections are popular with spectators, and are even spectacles of fashion on the eventing scene.

Two chapters discuss the medication testing processes in racing and equestrian sports and controversies that surround them. Of particular interest for Atock is the use of phenylbutazone (“bute”) and the evolution of regulating it both in Irish racing and in international equestrian sports.

Atock assisted the FEI in facing problems like “rollkur” in dressage, cross-country jumping injury and death in eventing, and over-strenuous travel and competition schedules for showjumpers. His book voices his personal concerns about endurance in the Middle East, and lists some of the paradoxes
facing the regulation of that sport.

“The regulators of the sport can never be complacent,” Atock wrote in 1994.

“The root metaphor must be the symbiotic unity of man and horse, mutually interdependent, rising to heights which neither could achieve alone.”

» My Friend the Horse is available from booksellers worldwide, including Amazon. Contact the publisher at marketing@austinmacauley.com or call (UK) +44 (0) 207 038 8212.

Alex Atock is a graduate of the Veterinary College of Ireland. Following early years in general practice in Ireland and England, and resulting from his interest in racing, he began a new phase of his career as veterinary officer at the Irish Turf Club (Jockey Club).

He next served as head of the Veterinary Department of the Federation Equestre Internationale (FEI), the ruling body of international equestrian sport, during a critical period for international transport of horses and proactive changes to protect the welfare of competition horses.

The author later served as veterinary officer and consultant to the United Arab Emirates Equestrian and Racing Federation and finally, as administrator of training programs in developing countries for the British-based international equine charity, World Horse Welfare.

Atock has a particular interest in facilitating the international movement of horses, doping and the control of medication in equestrian sport. He is past secretary/treasurer of the World Equine Veterinary Association. He and his wife, Sherley, have three grown children and live in Herefordshire, England.