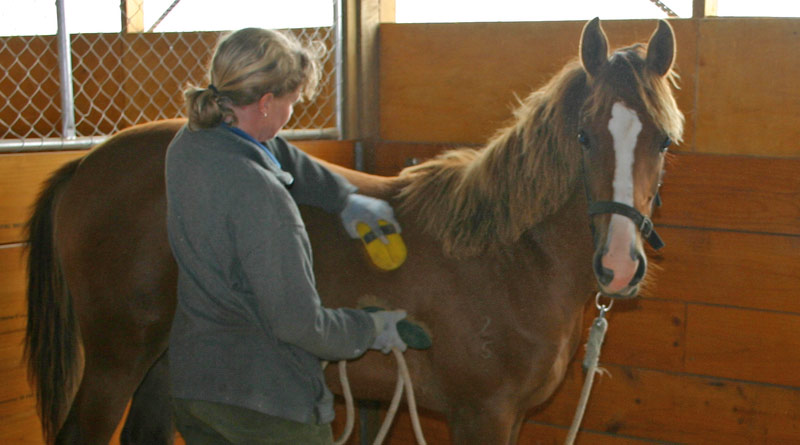 A nice, gentle grooming in all the right places is hard to beat, with evidence suggesting it is far more enjoyable for horses than an all-over brush-down.

Researchers in France have reported on an experiment in which they compared facial expressions and blood markers between two groups of horses who underwent grooming.

One group of 13 horses received gentle grooming for 11 10-minute sessions, using only the hands, which focused on the body areas they appreciated the most.

Horses in the standard group were groomed using a standard procedure, reported to induce avoidance reactions in some horses. Brushes were used at around 80 strokes a minute, in a protocol that continued over the body regardless of the horse’s reaction. 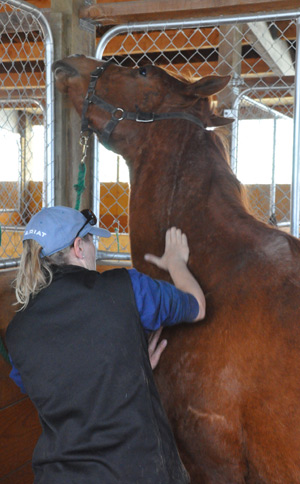 The study team also measured the heart rate and heart-rate variability in the animals, as well as blood levels of the stress hormone cortisol and the so-called “love hormone” oxytocin.

These never differed between before and after the grooming sessions, the study team reported.

However, after the 11 sessions, base oxytocin levels were lower among the gently groomed horses than the standard-groomed group.

“This difference was unexpected,” they said, “but supports studies showing that a low level of basal oxytocin could be a marker of better well-being.”

All the behavioural parameters measured during the 11th sessions differed significantly between the groups. Moving away, contracting the belly or back, and threatening or biting behaviours were mostly present in the standard-grooming group.

In contrast, encouraging contacts and attempts to nibble the handler appeared almost exclusively in the gently groomed group.

Facial expressions were similarly recorded during the last session of grooming.

Groups again differed significantly. The gently groomed group showed facial expressions, such as eyes half closed, lips extended forward and a lower neck position that pointed to a more relaxed state; while the standard-groomed horse showed more signs of displeasure, such as high neck carriage, eyes wide open with the whites showing, and contracted lips.

Strikingly, these very different facial expressions between the groups were still noticeable a year later when both groups underwent an identical grooming protocol.

“This suggests that observing facial expressions is a very sensitive method to assess the emotions felt by an animal during grooming, even when the animals no longer express any particular behaviour.”

Discussing their findings, the study team said: “These findings are very much in line with previous data which have shown that grooming can induce contact-seeking when preferred zones are massaged, but when the horse’s reactions are not taken into account it can lead to strong avoidance and defensive reactions.”

The results, they said, were important because it showed that only 11 grooming sessions had induced a subjective experience in horses sufficient for them to feel different emotions a year later when handled again by the person who had previously handled them. 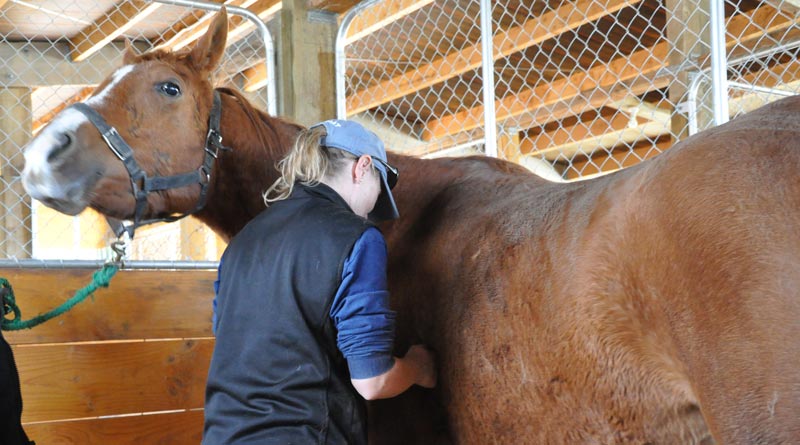 “This supports work on domestic animals, which has shown that a few handling sessions with humans can leave long-lasting traces.

“In future work it would be interesting to compare the facial expressions identified here with those of horses conducting mutual grooming. According to preliminary observations, they would seem to be very similar.”

They concluded: “In line with previous studies, this new work confirms that research on facial expressions is a promising avenue in the field of animal emotions.

Finally, the study had shown to what extent grooming practices, which could appear to be inoffensive, can have on a horse’s long-term general well-being and the human/horse relationship.

“This study thus serves as a basis to promote respectful and safe animal welfare practices in the field based on careful observations of behaviours and facial expressions.”