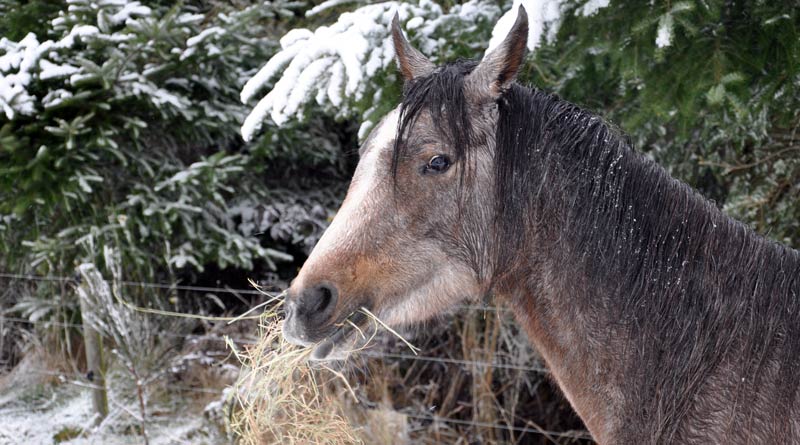 Adding additional protein sources to a forage-based diet is important for a horse’s overall ability to thrive.

When only one source of protein is fed, such as one type of grass pasture or hay, there can be many left-over amino acids that are not capable of being used to build and repair body proteins. Instead, they can go in other directions – directions that protein is not meant to go, including making an overweight horse even more fat.

The quantity of protein in the diet is important but even more so, is its quality. To achieve this, we need to include additional protein sources to a forage-based diet. It all has to do with the way the body digests and uses protein.

Its protein is digested down to individual amino acids. This process starts in the stomach and is completed in the small intestine. They are absorbed into the blood stream and travel to tissues within your horse’s body to be reassembled into long, branched chains of amino acids to create proteins that are specific to your horse’s needs. There are hundreds of proteins in the body, some of which include those in the muscles, joints, skin, and hooves, as well as digestive enzymes, antibodies, and some hormones.

Grasses and grass hays should offer the foundation of your horse’s diet. But their protein content is of poor quality. That means that while they do offer amino acids, including essential amino acids (those which the horse’s body cannot produce or produce in sufficient quantity), they are inadequate in number and proportion. So, when the amino acids from hay digestion reach a tissue, muscle for example, the muscle requires specific amino acids in the right number and proportion to build new muscle proteins.

Left over amino acids cannot be saved for later

With a poor-quality protein, there will be many amino acids left over because some key amino acids are not available in sufficient quantity to produce muscle protein, as in our example. The leftover amino acids cannot be saved for later. Instead, they go to the liver where they are broken apart – a process known as “deamination.” The amino acid is divided into two components: Ammonia (which later gets converted to urea and excreted in the urine**), and an organic acid.

** If your horse’s urine seems particularly strong-smelling, don’t necessarily assume that it is because he is getting too much protein. It could be because his protein intake is of poor quality, causing deamination of unused amino acids. Improving the protein quality will reduce urea content in the urine.

The organic acid portion can undergo biochemical changes in one of three directions:

Once blood glucose rises, the pancreas responds by secreting insulin to get the glucose into many of his body’s tissues. This should raise a “red flag” for owners of insulin resistant horses, since it’s not just sugar and starch that raises blood glucose – excess amino acids can, as well. This will only occur, however, if the diet is low in carbohydrates. Forages are generally high enough but if you are restricting forage to help your horse lose weight, he will need to get glucose from somewhere. He will likely lose muscle mass, since muscle offers a large amount of available amino acids, which can be deaminated and converted to glucose (through a process known as gluconeogenesis). In addition to muscle loss, he will use what protein he has in his diet to also offer glucose to keep his nervous system functioning.

The solution is not reducing forage. That would only make the amino acids be used for energy, for glucose (raises insulin), or encourage muscle loss. The solution is to provide enough quality protein so that the fourth and desirable outcome occurs: amino acids from hay digestion can be kept intact, not deaminated. 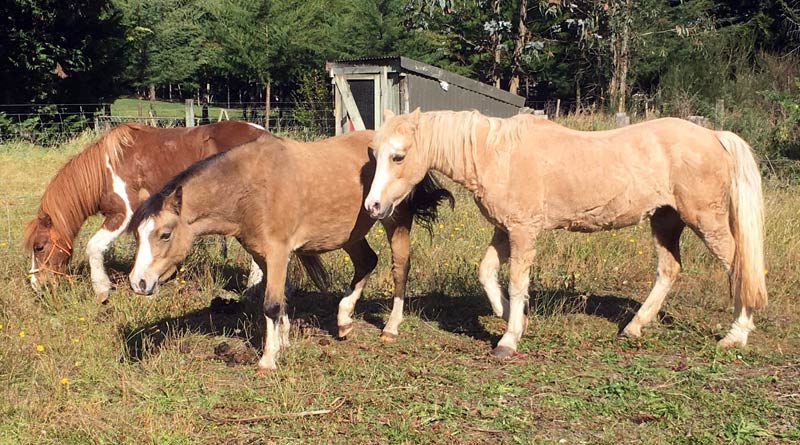 When amino acids are kept whole and not destroyed in the liver, they can be “strung” together in specific patterns to produce the protein needed within the body. The best way to ensure this is to add another protein source that has a different amino acid profile. That way, it can enhance the amino acid pool diversity. Hence, more amino acids are available for your horse’s health maintenance and repair.

An analogy would be making a beaded necklace where every fourth bead is red. You buy a bag of beads and there are some red ones, but you find that you cannot make a necklace at the length you’d like it because the bag does not have enough red ones (like feeding poor-quality protein such as only hay). So, you go out and buy a different bag of beads with lots of red ones (another protein source). Now you have enough red ones to make a necklace, and maybe even more than one necklace.

If your hay is high in protein, but it is the only source of protein, many amino acids will be destroyed. To reduce this, you’ll want to start by feeding a variety of grasses, not just one type of grass hay. Adding alfalfa will also help. But a preferable approach is to offer a small amount of non-grass feedstuffs such as ground flaxseeds, chia seeds, hemp seeds, and other whole foods. This results in an assorted group of amino acids, sufficient to meet your horse’s needs.

To offer your horse the amino acid building blocks he needs to build and repair body proteins, it is important that the diet contain a variety of protein sources to maintain an adequate amino acid pool. If this pool is missing too many specific amino acids, many will ultimately be deaminated in the liver, rendering them unusable for body protein production. Instead, they can be burned for energy, converted to glucose, and even stored as fat. Adding a small amount of protein-rich whole foods increases the number of intact amino acids, helping your horse remain strong and healthy.

2 thoughts on “The protein problem: Why horses need more than you think”