There are several reasons for this:

Why is soy so popular?

It has one truly worthwhile characteristic. Its protein content is of high quality. Protein found in other plants such as grass hay, is of low quality. This simply means that the amino acids found in hay are not present in adequate proportion to one another, making it difficult for your horse to have enough amino acids to maintain health.

There are 10 amino acids (out of about 20) that must be in your horse’s diet (listed in Table 1). These are referred to as essential amino acids (EAAs) because his body is not capable of producing them or cannot produce them in adequate quantity to meet his needs.

Most feeds contain some protein, and therefore, some EAAs, but if any EAAs are present in low amounts, they limit the extent to which the others can be used, resulting in leftover amino acids. And, unfortunately, amino acids cannot be stored for later use. Instead, they are dismantled within the liver into two components – an organic acid and ammonia. Ammonia is converted to urea and excreted in the urine. The organic portion can contribute to excess calories and even glucose production.

Your goal is to feed a full spectrum of amino acids, so your horse does not destroy many of them, and instead, uses them to build and repair body tissues. Since horses are herbivores, they rely on a variety of plant protein sources to accomplish this. Adding soy to the diet has provided a concentrated source of protein that is inexpensive and easy to feed.

But, there’s a new choice, a better choice … hemp seeds.

No, it is not marijuana. They are both part of the Cannabis family. But they are different subspecies. Marijuana is selectively bred to contain high amounts of psychoactive THC. Hemp seeds, on the other hand, are very low in THC (less than 4 ppm). Another phytocannabinoid, known as cannabidiol (CBD) is gaining interest in the health industry. It does not have any intoxicating properties and is found in low quantities in hemp seeds (less than 0.4%). CBD oil is derived from the flowers, stalks and leaves of the hemp plant, rather than the seeds.

Their two main proteins are albumin and edestin, both of which have significant amounts of all EAAs. They are comparable to soybeans’ protein content and in many cases, exceed the EAA content of the animal protein, whey (found in milk), as shown in Table 1. 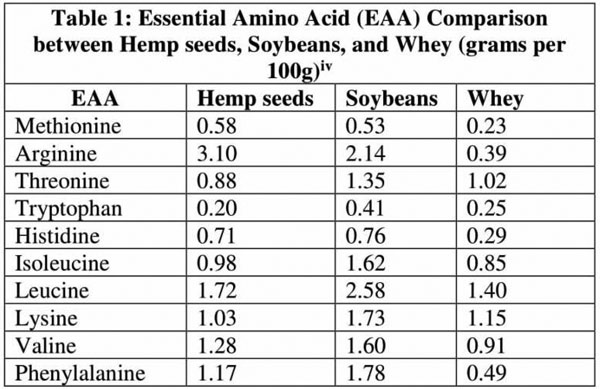 What’s even more impressive, however, is the percent of each EAA to the lysine level – a true measure of protein quality. With horses, quality is determined by comparing each EAA to lysine as it would ideally exist in muscle. Lysine is assigned a value of 100. Hemp seed and soybean values were calculated by dividing each EAA level by its lysine level (1.03 for Hemp seeds; 1.73 for Soybeans; shown in Table 1).

The ideal values are shown in Table 2, which reveals how every EAA found in hemp seeds surpasses the ideal percentage beyond soybean’s ability. 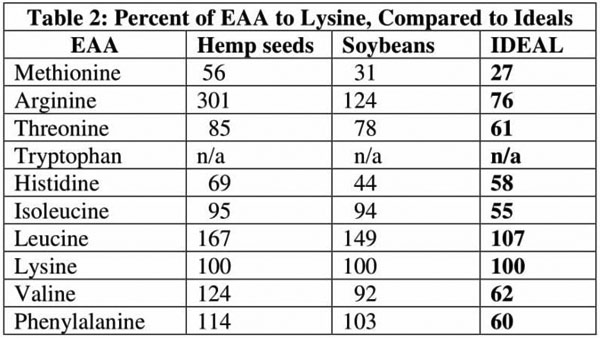 Both linoleic acid and ALA are found in hemp seeds. Their ratio is 3:1 linoleic (omega 6) to ALA (omega 3). While more omega 3s than 6s would better simulate the ratios found in healthy pasture, hemp seeds along with another source of fat such as ground flaxseeds or chia seeds, are an amazingly nutritious addition to the diet because of the other fatty acids they contain.

There are two types of fat in hemp seeds that you won’t find in significant quantity elsewhere:

Other benefits of hemp seeds

Hemp seeds can be fed ground or hulled. For a full-sized horse, the typical dose is ½ to 2 cups per day depending on the horse’s condition and energy needs. If your horse is overweight, you can feed hempseed protein fiber, which has less fat than hemp seed products containing more of the seeds. For horses requiring more energy or those who need to gain weight, hemp seed oil or high-fat hemp products, are an excellent way to add more calories.

Rather than reach for a feed that contains soy, consider feeding basic feed ingredients, proper supplementation, and hemp seeds. Hemp seeds are high in the quality protein and fatty acids your horse needs to maintain and repair healthy tissues. Offering whole foods on a regular basis, such as hemp seeds, gives you another tool in maintaining your horse’s overall health.