Davis, who turns 78 next month, has regularly made appearances at racing venues, the Secretariat Festival and other events to the delight of generations of fans, always willing to share stories of Big Red and his first-hand experiences as a member of the Meadow Stable Team. Those appearances are a primary source of income for Davis, but due to his illness, he has not been able to travel.

A crowd-funding project has raised nearly $15,000 to assist Davis with uncovered medical bills and unforeseen living expenses. Medicare will only pay a portion of his medical bills, and his Social Security benefit is barely enough to pay the $1000 a month for rent and utilities. 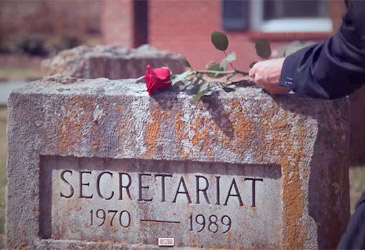 Long-time pal jockey Ron Turcotte, who rode Secretariat to his 1973 Triple Crown wins, the family of the late Penny Chenery, and Secretariat.com, and a few special friends have also contributed to fund-raising efforts.

Davis, a native of Eutawville, South Carolina, was a member of legendary trainer Lucien Laurin’s “Holly Hills” crew and exercised some of the era’s top racing stars of the 1960s, including champion filly Quill and Belmont Stakes winner Amberoid. In 1971, when Laurin took over Christopher Chenery’s Meadow string, Davis was assigned as exercise rider for the stable’s champion colt Riva Ridge and later Secretariat. He still enjoys sharing memories of the 1973 Triple Crown winner he affectionately calls “Red.”

“He give me a vibe,” Davis remembers. “Like your kid is talking to you, but it was a stronger vibe, like, ‘Hey, I’m the man, you just along for the ride’.”

Davis has enjoyed a lifetime of adventures in horse racing – from the day he got on his first thoroughbred at the age of 10, to working fast racehorses before he was old enough to drive a car, to helping Secretariat make racing history. But the stories didn’t end there. At the age of 70, he remained a part of the racing game, where he worked with newborn foals and frisky colts at a breeding farm in Ocala, Florida, while periodically hopping a jet to fly off to another event honoring Secretariat. He even appears (briefly) in the motion picture Secretariat.

As a token of appreciation, Davis is sending a signed photo of himself aboard Secretariat to each donor. Such has been the response that his family has asked that a self-addressed (with the name used for the donation) and post-paid envelope is sent to PO Box 831072, Ocala, FL 34483. Cards and letters for Davis can also be mailed to: Charlie Davis, ℅ Secretariat.com, P.O. Box 4865, Louisville, KY 40204.