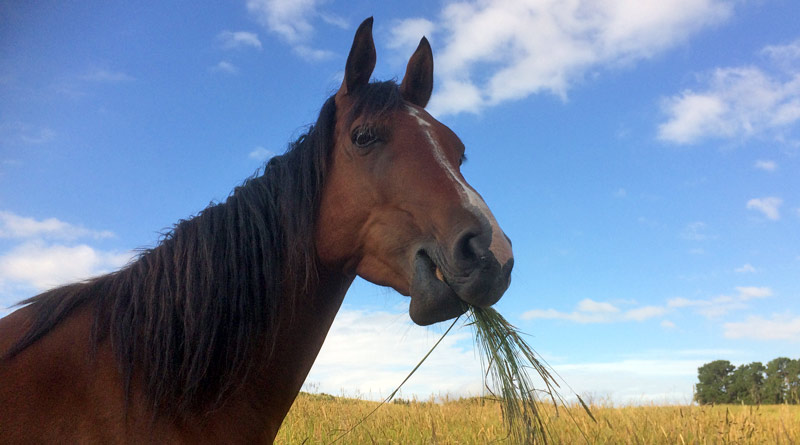 The challenges in a diagnosing and treating inflammatory bowel disease (IBD) in horses are highlighted in a recently published study.

No conclusive diagnostic test is available for the condition, the most common outward sign of which appears to be weight loss.

Several different types of the disease, each of which can affect either the small and/or large intestine, can be distinguished through microscopic examination of gut tissue.

Most horses with the disease present with problems such as recurrent colic, weight loss (often despite a good appetite), poor performance, lethargy, and fluid buildup in the lowest part of the belly. They can also have low protein levels in the blood, including albumin.

Over 70% of horses thought to have IBD had an abnormal oral glucose tolerance test (OGTT). This is the most common non-invasive diagnostic tool, used to assess malabsorption, of which IBD is the major cause.

The prognosis for the disease is generally guarded.

Definitive confirmation of IBD can only be obtained by assessment of intestinal full-thickness biopsies under the microscope, harvested during either an exploratory laparotomy or laparoscopy or a post-mortem examination. Duodenal and rectal biopsies have become a quite common diagnostic approach.

Catherine Delesalle and her colleagues, writing in the journal BMC Veterinary Research, undertook a restrospective study involving 78 horses, mostly warmbloods, suspected of suffering from IBD that were referred to four large equine referral hospital in the Netherlands and Belgium.

The Dutch and Belgian study team examined the case history for each horse, the diagnostic workup, the clinical findings, and the outcome of treatment in a bid to learn more about the condition and its treatment.

It was, to their knowledge, the first large-scale study with a multi-centre approach to study the diagnostic work-up of horses with IBD.

Only weight loss was significantly associated with abnormal intestinal biopsy results, but not with abnormal OGTT results or low blood total protein.

They found that, in most cases, diagnostic tests were typically performed in the following order, starting from minimally invasive towards invasive.

All horses were subjected to a similar OGTT protocol in all four referral centres.

Biopsies were taken from either the duodenum or, in the case of the hospitals, the rectum. Discomfort was rarely shown during the procedure and no complications were encountered. The samples from the rectal biopsies generally were rated as being of better quality.

There was no association ultimately found between dietary changes and positive outcome. No positive association was identified between treatment with corticosteroids or omeprazole.

Long-term follow-up was achieved in 39 horses. In total, 12 out of 39 horses died, 10 of which were euthanized because of IBD and two due to orthopaedic problems. From these 10 horses, eight showed an abnormal OGTT.

The study team found that horses were predominantly admitted during their active sports career and no gender predisposition could be identified.

They noted that human IBD is caused by a combination of inheritance and certain dietary habits.

“Thus the equine diet could be an interesting factor to focus on,” they said.

“However, in this study no significant association was found between pre-diagnostic feeding management and a disturbed OGTT or a disturbed enteral biopsy result.

“The possible link between feeding management and IBD has been suggested in several equine studies. However, no study has been able to pinpoint this.”

A possible explanation for this is that equine IBD manifests itself in many forms and the diversity among the studied populations results in poor statistical power.

“Prednisolone was used most often for IBD patients in the four referral centres. The inability to find a positive effect of prednisolone on long-term outcome could be erroneous due to a type II statistical error, since for only 31 of these prednisolone treated horses a follow-up was available.

“However, 19 of these 31 (61.3%) prednisolone-treated horses were categorized by means of the telephone questionnaire as performing to expectation.”

The authors say there is a great need for systematic studies on the harvesting technique and microscopic examination and interpretation of duodenal and rectal biopsies in horses.

“Based upon our study results, in horses suspected of suffering from IBD most rectal biopsies are aberrant (82.2%), in comparison to 56.8% of duodenal biopsies.

“Therefore, the ‘rectal’ biopsies seemed particularly useful in the current case series. It may be possible to increase the usage of colonic biopsies (at least of the descending colon) in horses relatively non-invasively.”

They said the disappointing quality of the duodenal biopsies needed future attention, since it was likely this had a negative effect on interpretation under the microscope.

In conclusion, they said weight loss was highly prevalent among horses suspected of having IBD.

They said biopsies of the gut may be a useful diagnostic aid in the work-up of horses thought to suffer from the disease. However, further research was required to prove their true diagnostic value, they said.

“Until more standardized scientific research is available, one should be careful with the interpretation of enteral [gut] biopsy results,” they said, adding that there was a need for better standardization of such biopsies and the scoring of the samples under microscopic examination.