CT scans have proven their worth in identifying infected cheek teeth in horses.

Problems with equine cheek teeth, especially infections of the pulp and root area, can have serious consequences due to their frequent spread to the supporting bones and/or nearby paranasal sinuses.

Limited studies have looked at the accuracy of computed tomographic (CT) imaging in diagnosing these problems.

Tiziana Liuti and her colleagues set out to explore the accuracy of CT scans and x-rays in identifying abnormal equine teeth.

The researchers, whose findings have been reported in the journal Frontiers of Veterinary Science, carried out imaging of the heads of 54 horses that had died or been euthanized on humane grounds.

Based on the imaging work and examination by eye, 30 abnormal cheek teeth were identified and extracted for further imaging and examination (including microscopically). Eight additional teeth that were assessed as normal were extracted and used as controls.

Gross pathological and microscopic examinations indicated that 28 of the 30 teeth at the center of the study had pulp/root infections. 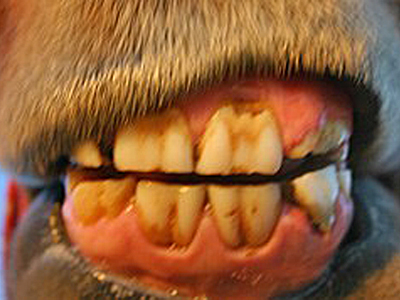 CT imaging had strongly indicated the presence of infection in 27 of the 28 teeth (96.4%) whereas x-rays confirmed infections in just 50% of the teeth.

The study confirmed the superior accuracy of CT scanning compared with radiography in detecting root infections in equine cheek teeth.

The authors noted that all the teeth appeared to have low-grade chronic infections, which may explain the poor sensitivity of x-rays in diagnosing the infections at an early stage.

The study had shown an inexplicably high prevalence of infections among the horses − in just over half of the 54 heads sourced for the study from a rendering plant.

“Unfortunately, no clinical histories were available for any of these cases, and this extraordinarily high prevalence of dental disease may be a reflection of the study population.

“These were all ill horses that had died from disease or were euthanized on humane grounds.”

However, it would appear that none was euthanized on the grounds of old age since the average age was 12.

The true prevalence of pulp- and root-related clinical disease in the cheek teeth of horses within the general population was unknown, they said, but was likely to be less than 2%.

The study team comprised Liuti, Sionagh Smith and Padraic Dixon, all with the Royal (Dick) School of Veterinary Studies and The Roslin Institute, part of the University of Edinburgh.