During Craig’s visit to Wildhorse Ranch, our privately owned wildlife and wild horse preserve, Craig and I delved into the many issues swirling around America’s wild horses and burros and reviewed each of our bold visions to save wild horses, burros and our forests:

Downer’s Reserve Design Proposal is in my opinion the only way wild horses and burros should be managed on public lands by the BLM or any other entity, and it encompasses both solid science and practical experience.

Of course I shared my vision for the Wild Horse Fire Brigade (WHFB) plan to save the horses already rounded-up and in corrals from slaughter or euthanasia by the BLM. And having seen first-hand the value that wild horses and burros can provide to the ecosystems in an around forests and their affect on abating ground fuels, Downer endorses the WHFB plan and encourages its adoption.

The BLM is just one arm of the “powers” behind what certainly seems like the managed extermination of America’s legendary and treasured wild horses, among other things. In addition to the cattle industry, which monetarily is puny by comparison, the oil, gas and mineral conglomerates are arguably lobbying behind the scenes to remove wild horses and burros from the public lands, and with good reason from a monetary perspective; trillions of dollars.

The situation is not as simple as most advocates seem to believe. I have penetrated deeply into political circles and have interviewed some key strategists and lobbyists and have subsequently connected the dots … which to me, paints an ugly picture of greed, corruption and ignorance.

The “powers” are very concerned about the recent scientific revelations as to the natives species status of American wild horses, which are now starting to come into public purview. Part of that effort involved the submission of my recent article on The Three Greatest Myths About America’s Wild Horses.

The powers worry that if the wild horses achieve ‘native species’ status, then, due to their relatively low numbers under ESA guidance, they could potentially become an ESA listed species. And if that happens, it throws a huge monkey-wrench into their plans for extracting trillions of dollars worth of oil, gas and minerals from the lands (habitat of a native species?) where horses and burros are currently or could be managed. Therefore, they have quietly cooperated with the policies to manage all wild horses into extinction under the boot of the BLM, as has been cited by Dr Ross MacPhee.

As a part of this now exposed conspiracy, the BLM has been caught openly lying and misinforming the American public about wild horses on their website, and they were lambasted by one of the curators at the American Museum of Natural History for doing so.

Here is the transcript of that diplomatic lashing of the BLM.

The wild horse advocacy in general is not fully informed nor in some cases, capable of understanding the ramifications of all of the foregoing. Even getting one’s head around the money involved (trillions of dollars) requires comprehending the abstract; a financial reality so large that in the past our government was quite willing to send our military to war in regards to sums this large. So in terms of the wild horses, we see that to them by comparison, killing all the horses is like swatting a fly to us.

Obstinately standing in their way, as some advocates continue to do, is just not going to work; the powers view the 1971 Wild Burro and Horse Protection Act as an inconvenience and something to be hollowed-out and then tossed into the round file. So expecting them to adhere to the Law, well, when has that happened in Washington lately?

Demanding and insisting that wild horses be left in place, or returned from corrals into the Herd Areas, is just folly and will lead to their deaths, one way or another. It’s akin to standing in front of a speeding freight train expecting it to stop because there is a horse on the tracks … it won’t and they don’t.  In order to save the horses, we must offer an acceptable alternative path for the redisposition of the corralled wild horses, while concurrently pursuing the legalization and codification of their American native species status. 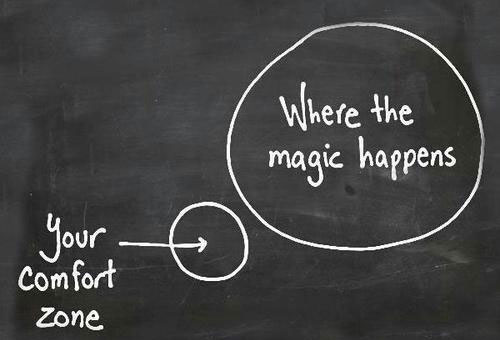 The Natural Wildfire Abatement And Forest Protection Plan (aka: Wild Horse Fire Brigade) that I have tendered has buy-in by several senior politicians, and scores of others. And it can work to save the wild horses before they are gone … the stubborn hardheadedness of some advocates will not by any means overcome or get between the powers and the money they have in their sights … and it’s just reckless to fail to learn that truth from history, which always repeats itself.

The corralled horses desperately need an out of the box solution for their very survival, and this plan offers a politically and monetarily viable solution.

Short of a solution that offers an acceptable alternative to the powers and the BLM, the corralled wild horses, if not sent to slaughter, will simply be shot in the head and then pushed into a huge hole in the ground using bulldozers paid for by us, which is not slaughter, and they will admit as much. Instead, it will be called ‘euthanasia’, a humane disposal of the excess horses (‘excess animals pursuant to S-3068, Section 110) by the BLM.

If people really think that posting pictures and pleas all day-long on Twitter will change the course of events I have outlined above, it will be a very sad day indeed for all, and horses will be gone. That is the tragic and ugly reality.

But with everyone’s help and a better strategy we can save the wild horses … that is a fact!

Horses are very well suited to habitat areas in and around forests, something the scientists are just now beginning to learn, which we learned 4-years ago when Laura and I entered into our mountain wilderness. Cosmos Magazine recently featured an article about how horses survived the Ice Age in Europe by moving into the forests there. 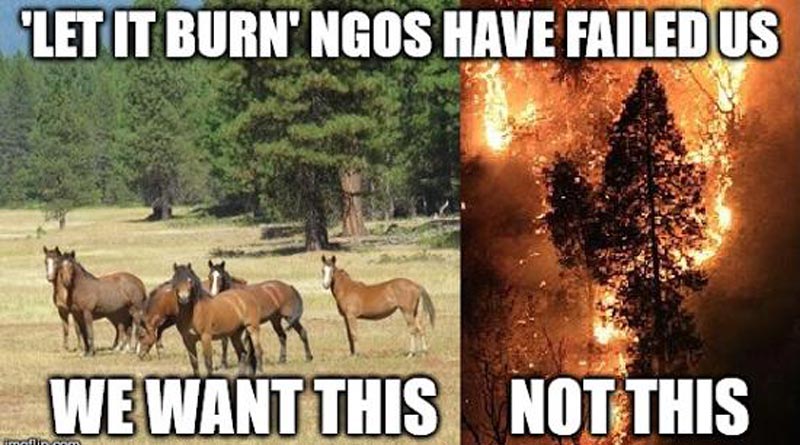 Catastrophic wildfires are another area where the vast majority of public (and environmentalist NGOs) has inadequate knowledge to field a fully informed opinion. And so in some cases they prefer to continue with an obtuse perspective and proffering long-failed methods, which serves no logical purpose other than preserving ego, and donation dollars.

Wildlife resources have been mismanaged in many instances as a result of over-bearing influences of naive environmentalists, who arguably do not have the extensive practical experience needed to have a complete understanding (books, field trips and videos only get you so far). They were completely wrong about the spotted owl (at a devastating cost) and their own published and documented projections on deforestation due to continued logging in 1990 were incredibly incorrect.

From a published document at the University of Santa Clara: “Environmentalists admit that saving the owls’ habitat could cost jobs. But, they argue, these jobs will vanish no matter what. For if cutting continues at its current rate of 125,000 acres a year, the old-growth forests will be gone within thirty years and the mills forced to close anyhow.”

The stark reality of the foregoing folly and lack of vision is now upon us.

As we have all seen, since the transition to the ‘green movement’s’ methods of managing public forests in the 1990s, we are in fact actually losing many millions of acres of forest annually to catastrophic wildfire!  Think about it … this year so far we have seen catastrophic wildfire devastate over 10 million acres in America, and of that, about 5 million acres were forests!

Let’s Review: The environmentalist NGOs in the 1990s said: “if cutting continues at its current rate of 125,000 acres a year, the old-growth forests will be gone within thirty years.”

NOW, having run the show their way for the past 30 years, we are burning forests at a rate that exceeds 40-times the rate of past logging!  So, whose really destroying forests, wildlife, habitat and watersheds? Environmentalist NGOs or loggers?

The spotted owl, it turns out, was being predated by the barred owl, according to the newest research.

Now we have the same folks influencing policy on the management of apex predators, which are now so plentiful, they have devoured the ‘lion’s share’ about 80% of all California deer herds in the past decades, and that changes the wildfire regime to wit:

According to Science Magazine: “By altering the quantity and distribution of fuel supplies, large herbivores can shape the frequency, intensity, and spatial distribution of fires across a landscape. There are even unique interactions among large herbivore populations that can influence fire regimes. For example, facilitative interactions between white rhinoceros and mesoherbivores result in reduced fuel loads and fuel continuity, and consequently fewer large, intense fires. Other factors can influence the frequency and intensity of fires, particularly in locations where the total area burned is strongly related to ungulate population size.”

Balanced management requires logic and experience, not emotion, not ideologies, not ego. We have lions predating our local herd of wild horses so intensively now, the herd population has dropped from about 67 adults to about 52 adults in the past four years (I have the photos to prove what I say). Naturally, this is a concern to us, given the big drop in our herd.

We live with wild horses and have done so in a natural forested mountain wilderness ecosystem for the past four years. Craig Downer has stayed with us at Wildhorse Ranch and knows this to be true.

The now debunked wild horse and burro dogma remains thick nevertheless, and if we truly care about the horses and burros, we have to credibly deal with that as well, almost daily. How can any agency possibly expect to manage any natural resource, let alone the complexities of wild horses, without having a complete and factual understanding of the fundamental behavioral ecology of wild horses (not domestic horses).

I was recently compelled to correct one of Oregon Senator Merkely’s aides about the behavioral ecology of wild horses when I learned they were incorrectly informing people that wild horses prefer to eat only sweet grass, and won’t eat woody plants … so I had to pull out one of our videos and send it to them. They watched it and then, in writing, the office of the Congressman wrote: “We stand corrected”. Here is that video:

Allowing people, scientists or not, without extensive experience, to influence the management of our wild horses and burros, as well as our other publicly owned natural resources, is just pure folly. And now, we are paying the heavy price via catastrophic wildfires and the related disasters to wildlife and watersheds.

These are the hard questions that must be immediately faced and must take precedence in guiding management policy over and above flawed ideologies, emotion, myth and outdated dogma that have resulted in the massive management failures we are saddled with today.