Let’s be clear; the relatively recent catastrophic wildfire issue we are experiencing is not part of any known or historic ‘normal fire cycle’. Genetic lines of fire-resistant conifers are being devastated (no seed dispersal!). In fact, Dr. Paul Hessburg’s (USFS fire scientist) coined term of ‘megafire’ defines a new relevance in regard to massive wildfires now reaching and exceeding 100,000 acres or more.

Yet these new breed of super-hot wildfires are actually quite simple to understand and to explain (but some scientists don’t like it if you steal any of their thunder), and too many people want to make it more complicated than necessary to keep average Americans out of the debate by complicating the debate with acronyms and terminology that take days to learn, or by interjecting pet projects and going off into the depths on side debates, which virtually assures these wildfire disasters will prevail.

Americans Don’t Need A PhD To Do The Simple Math:

1. FACT : Western U.S. (California) black tail deer populations are depleted. The population is down about 2-million animals from about 2.4 million in 1975 to about 350,000 today, as the graph shows here: 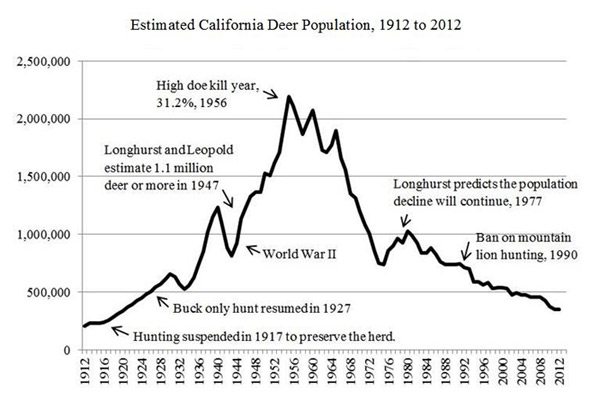 We have a newly evolved ecological imbalance due to poor wildlife management. And other losses are stacking up as well … the wildfires are killing-off remaining deer andelk, as well as harsh winters, as we read here.

2. FACT: The missing two million California deer and some elk (other states, including Oregon have the same issue) were previously consuming nearly 3 million tons of grasses and brush, or whatever grasses/brush the rains would produce. But now without those millions of deer (and some elk), it instead remains standing dry in the long, hot summer sun. Like gasoline, this incredible annual amount of fast and hot-burning fuels is present in and around forests and the wildland urban interface (WUI). This is a new evolution due to the depletion of the deer, nothing more or less.

An Ecological Imbalance is the root of our current wildfire problem.

All the millions of tons of grass and brush that was previously consumed is now left standing and dry as a cracker every summer. And with more rain, there is more fuel that remains in and around forests. And it’s an embarrassing truth for some scientists since they missed it! That surely seems to be the case, and I say that only because now that we know these undeniable facts, we begin to look for any scientist or fire manager who has written about the correlation, which now seems obvious once unveiled. I am certain that the first formal scientist who connects these dots will receive some acclaim.

These enormous amounts of annual grasses and brush are the root of what turns out to be a new and very serious problem that has also been missed by traditional fire planners who are disconnected from this new revelation. And it will take many decades of very careful deer management to replenish the herds … so what is to be done in the interim? Hire 10,000 people with weed eaters to climb all over the wilderness … surely that’s a disaster. Goats? Of course the widespread introduction of an invasive species – such as goats, which can devastate a natural ecosystem – would be the unleashing of yet another monumental disaster. As we cast about for readily available cost-effective solutions to the grass and brush problem, it becomes very apparent there is really only one solution at hand:

Use the 50,000 corralled wild horses to abate the ground fuels by deploying them into carefully selected areas, as I have outlined here:

3. Fire season is now longer due to climate warming and makes these newly present excessive fuels even more dangerous than they are. This new prodigious amount of grasses and brush was the principal fuel that devastated Sonoma County, burning dozens of people alive. And destroying thousands of homes. There is so much fuel now that prescribed burns are no longer advisable because they can now quickly get out of control, as we have already seen many times.

4. The reintroduction of native-species large bodied herbivores is literally the only logical, natural and cost-effective solution. Native species wild horses in BLM/US Forest Service corrals can be immediately and effectively deployed for this purpose and they are a native species with evolutionary mutualisms to the forests and grasslands. Many people (even wildlife biologists) incorrectly believe that wild horses are adapted only to plains and grasslands, but that is a view that stems from a lack of information of their historic ecology; we have wild horse fossils in Oregon and California forests. And in Europe where there seems to be fewer cattle industry myths being circulated, the scientists have just discovered this suspicion to be true there as well.

Doubling down on failed methods is obtuse and reckless management

The rate of failure in forest/watershed management as measured by the indisputable accelerating rate of loss of life (human and wildlife), loss of property and deforestation in America, which now is approaching 10 million acres annually, says that the methods and policies promulgated by dogma that does not consider this relatively new decline in cervids (deer, etc.) is flawed and if adjustments are not immediately made, more people will die, more homes lost, and more forests, wildlife and watersheds will be lost.

We need more than a myopic understanding based upon dogma that is a well-proven failure. We need to look at the big picture and the holistic landscape and the recent changes that have occurred in and around the forest and WUI landscape due to other flawed wildlife management methods.

There is a huge disconnect between management disciplines, and the interactions between wildlife, forests and fire management are now emerging and the impacts of aggregated management flaws are killing people and destroying property.

Look at the Sonoma fires! Really, watch the videos of fire crews throwing everything they have at an unstoppable firestorm fueled largely by just grass-brush matrix and of course homes!

“The fires, fueled by dry grasses and brush“.

These same ground fuels drive firestorms in and around forest areas, and these firestorms are capable of jumping mile-wide rivers, as many of us saw on TV when the Oregon Eagle-Crest wildfire jumped the Columbia River and lit the forest on the Washington side on fire! So much for ‘defensible space?’…

So much for the nice sounding term of ‘defensible space’. Of course paved streets with cement sidewalks also seem like great ‘defensible spaces’ too, right? They weren’t as we saw in Sonoma where dozens of people were literally burned alive! Think about the approximate 7000 homes (built to modern code) burning to the dirt! What next, do we have a ‘bunker building code’ to make up for obtuse fire prevention methods and the failure to understand what’s happened in the ecosystem.

Well, when the grass-brush fuel matrix is present in record amounts (not grazed by millions of deer) and is ubiquitous and throughout areas in and around forests, you can expect so-called ‘prescribed burn’ methods to also fail. Case in point, the prescribed burn in the Ashland, Oregon watershed. The fire crew were already on-site ‘hoses-wet’ when the prescribed burn exploded into a firestorm due to the excessive grass & brush fuels … and the fire crew was barely able to save Ashland from a disaster. Had that same area been ignited by a careless person or lightning, without a fire crew on the spot, that forest and potentially the city of Ashland would have been devastated!

Read more about this here.

We cannot in any manner truly manage fire risks until we address the depleted herbivore issues. We need grass mowers that safely, naturally and year-round, abate the explosive grass-brush ground fuel matrix. We must introduce some form of native grazing animals at least and until the deer populations can be brought back into line, allowing the millions of tons of grasses and brush to be once again abated naturally. One cheap, readily available and effective method (that is ecologically sound) is the re-introduction of native species wild horses into the more remote areas.

There is no other wildfire prevention plan on the table that provides such a natural and cost effective part of a holistic fire prevention and management plan, and also assigns this much utility to wild horses, which as unfortunate as it is, the government needs to assign to allow them to live … sad but true.