Two shetland ponies have done a turn on patrol with the Mounted Branch of Metropolitan Police in London, keeping up with their much larger colleagues on the beat.

The pair are popular mascots with Olympia’s official charity, Hannah’s Willberry Wonder Pony, and Doris and Teddy will be joining the police horses in the MPS Police Activity Ride at Olympia, the London International Horse Show next month.

Stepping onto the Mall, one of London’s most iconic locations, Teddy and Doris lined up with Police Horses Merlin and Quixote and despite the noticeable size difference, the tiny pair just about kept up as the steady Police horses took them under their wing as they walked side-by-side towards Buckingham Palace.

Instagram sensation Teddy the shetland’s owner, Alice Goring, also the charity’s Scientific Advisor, said it was the first time Teddy and Doris had been to London. “It is great they could familiarise themselves before Olympia Horse Show starts in December. 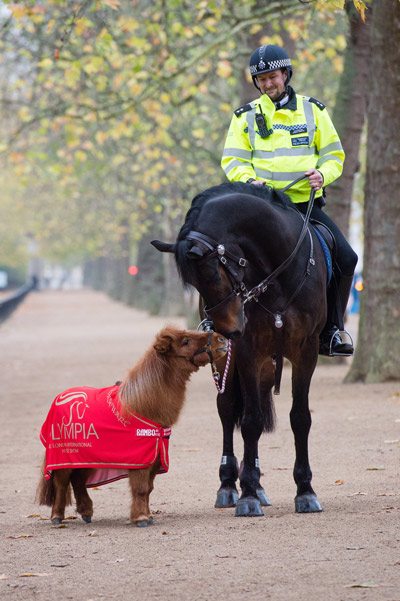 Doris was Hannah’s own Shetland and meant the world to her. I am not sure they are quite ready to join the Police Force yet, they only have little legs, so it would take them a long time to get around all the streets of London! But we are so grateful to Inspector Simon Rooke for letting them be part of his incredible team for a morning and helping to raise awareness for Hannah’s legacy.”

The charity was founded by the late Hannah Francis, a successful young event rider, when she was diagnosed with a rare bone cancer. The charity aims to support research into osteosarcoma, together with granting Willberry’s Wishes to seriously ill people with the aim of enriching their lives through equestrian experiences. Hannah was so touched by the generosity of many in the equestrian world who allowed her to do likewise and was determined to be able to do the same for others.

Inspector Simon Rooke said that while Doris and Teddy were not the usual type of horse the police had on patrol, “but they certainly added something different!”

“The Metropolitan Police Activity Ride are extremely proud to be performing in front of the wonderful crowds at Olympia this year. The show gives us an opportunity to demonstrate the extraordinary bravery of our horses and the unique bond of trust they have with our officers. The horses that will be performing at Olympia, including Merlin and Quixote, are all operational and patrol the streets of London daily.”

The Activity Ride demonstrates the day-to-day training routine ahead of patrolling the busy streets of London, carrying on a proud tradition of service and duty which began in 1873, when horses were hired from a local livery stable for use in emergencies.