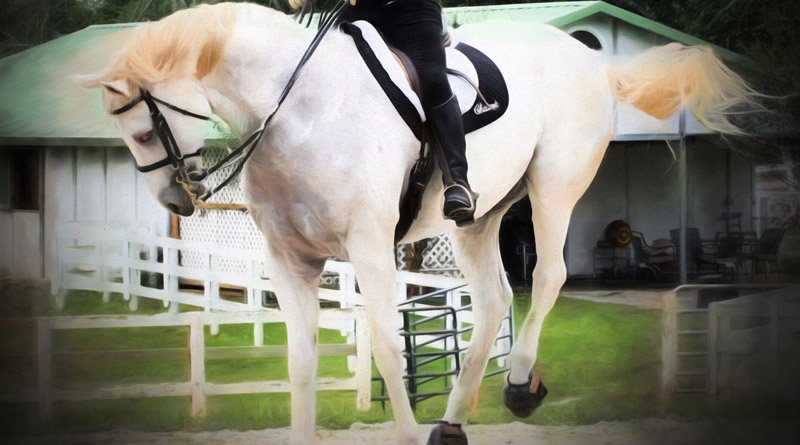 Riders and trainers practicing the hyperflexion of the upper neck are enforcing a position of ultimate domination by placing their horse in a situation where they have physically no way out.

Submissive techniques belong to the equestrian education of the medieval age.

A major obstacle, however, needs to be eradicated: an erroneous theory, which like a drug is feeding the dream that one will be winning while simultaneously destroying the partner without which one cannot win. With hyperflexion, the awkwardness and discomfort of the horses’ body language have disgusted practically every rider and trainer with ethics and decency.

However one looks at it – from the perspective of the main ligaments involved, the muscular system, the kinematics of the limbs, or the biomechanical properties of the vertebral column – there is no advantage in over-flexing the horse’s upper neck. 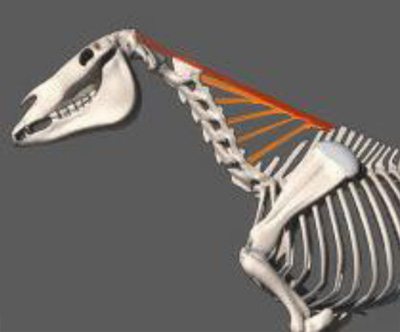 The nuchal ligament is an elastic structure inserted at one end on the dorsal spinous process of the fourth thoracic vertebra and attached at the other end on the cervical vertebrae and the skull.

The general consensus is that the nuchal ligament supports the head in an alert position, yet stretches enough to allow grazing.

In reality, in reality the opposite is true; the nuchal ligament is not under tension when the horse holds the head and neck in an alert posture. 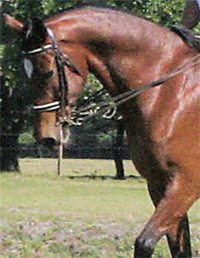 The head and neck carriage commonly presented at FEI dressage level is totally assumed by the work of the upper neck muscles. The nuchal ligament is then almost totally unstrained. “At a neck angle of 55º all portions of the nuchal ligament are unstrained.” (K. S. Gellman, J. E. A. Bertram (Cornell University) The Equine Nuchal Ligament: Structural and Materials Properties, 2002).

The lowering of the neck that the horse spontaneously executes after work is not a stretching of the upper neck muscles as emphasized by traditional anatomists, but rather an astute way to ease the work of the upper neck muscles, thereby increasing the contribution of the nuchal ligament. So when a horse relaxes and lowers his head, he is giving his neck muscles a rest by changing his head and neck position which in turn means the nuchal ligament is now active.

The principle of storage and restitution of energy that is commonly accepted in respect of the long tendons and ligaments of the horse’s lower legs, applies within the neck to the nuchal ligament. Large animals such as the horse cannot function on the simplistic concepts of muscles moving bones.

It would require enormous muscle mass and tremendous muscular energy to move the horse’s limbs and body. Instead, the horse has developed a sophisticated mechanism of short muscles assuming optimum elastic recoil of long tendons, which in turn are moving the legs. It is this elastic recoil effect that reduces and enhances the work of the muscles.

In order to measure the strain energy storage capacity of the nuchal ligament, the two researchers from Cornell University investigated the material and structural properties of the ligament. Observing differences in density and volume from the attachment of the nuchal ligament on the withers area by comparison to the insertion on the skull, Gellman and Bertram divided the funicular element into four equal parts.

The two scientists observed that the two segments labeled above as F3 and F4 had little tissue volume. “These portions have been neglected from the reminder of the analysis because it is doubtful that they store a useful quantity of elastic energy.” (Gellman, Bertram)

These sections, which are too weak to even be considered in a scientific investigation, are the portions that are placed under intense strain when the upper end of the neck is overly flexed!

“Functional load bearing, in the equine nuchal ligament, passes from its origin on the cranial thoracic spinous processes though the nuchal ligament regions F-1 and F-2, then to region L-4, inserting on the second cervical vertebrae.” (Gellman, Bertram)

“Virgchow, 1915 has already pointed out that in the dorsal direction (ventral concave) the cervical vertebral column can be stretched only so far, that the vertebrae are lying in a straight line. A further dorsal flexion is chiefly prevented by the ligaments. Thus the fact that the Ungulates with their long necks can reach the ground with their mouth, is not based on the mobility of the neck. It is made possible by the mobility of the thoracic vertebrae, by the mobility of the atlanto-occipital joint and by the posture of the fore-legs.” (E. J. Slijper, Omparative Biologic-anatomical Investigations on the Vertebral Column and Spinal Musculature of Mammals, 1946)

The general consensus is that as the horse sustains the trunk between the shoulder blades, the deepness of lower curve lessens, allowing the upper curve to move the poll forward over the vertical of the mouth.

The line of function of the nuchal ligament, from the withers to the back of the second cervical vertebrae, strongly suggests, instead, that lowering the neck and therefore increasing the tension on the nuchal ligament may deepen the lower curve of the cervical alignment sagging the trunk between the shoulder blades.

A secondary effect, known as “verticalization” of the dorsal spinous processes further aggravates the problem. “In the living horse, as is also the case in anatomical specimens, the lowering of the neck produces a verticalizationof the spinous processes in the wither.” (Jean Marie Denoix, Spinal Biomechanics and Functional Anatomy, 1999)

The theory was infantile. The extrinsic muscles of the forelegs adjust instantly to the load. Their adjustments are not retroactive. The difference, if there was one, was more like that of the saying of the man who hits his head against the wall because it feels so good when he stops.

However one looks at it – from the perspective of the main ligaments involved, the muscular system, the kinematics of the limbs, or the biomechanical properties of the vertebral column – there is no advantage in over-flexing the horse’s upper neck. Not one of the scientific studies has found any athletic advantage in over-flexing the horse’s upper neck. I am referring of course to the scientific investigations that have not been financed by the Rollkur proponents. The question is therefore why riders are using this technique?

In 1995, the great Reiner Klimke wrote: “Now we breed only Rembrandts and Gigolos, if we can – and therefore we have developed our sport. The riding has not become better.”

Klimke refers to Rembrandt and Gigolo because they were at this time the best horses in the world. The prediction of the late Olympic champion was accurate. Breeding programs have since given birth to even more extraordinary horses. However, with superior talent comes tremendous power, great intelligence and high spirit; so much of these qualities that conventional training techniques are overwhelmed.

Instead of upgrading their equestrian education to the quality level of their horses, riders and trainers practicing hyperflexion of the upper neck are dominating their horses, who have physically no way out. Upper neck muscles as well as higher segments of the nuchal ligament are weak; and once trapped in this posture, either subdued by physical pain or because they have no way out, or both, the horse’s brain shuts off as a survival reflex. They execute the moves mechanically, focusing on staying alive.

This is a failure of Olympic dimension. The horses, the science and the tradition working together had the opportunity to further the standards of excellence. Humans as well as equine athletes come with superior predispositions but they still have to learn the subtle coordination of their physique that optimizes their talent. The sophistication made possible by an actual understanding of the horse’s vertebral column biomechanical properties demands greater engagement of the horse’s intelligence.
Submissive techniques belong to the equestrian education of the medieval age. There are about 344 articular surfaces in the horse’ vertebral column and their precise orchestration can only be coordinated by the horse’s brain with the rider’s assistance. Guiding the horse’s brain toward a physical orchestration far more elaborate than the limits of natural reflexes and that the horse’s mental processing could not conceive without the support of the rider’s analysis, is the partnership that classic authors and modern science are viewing as the ultimate achievement. Horses are ready, so are a large majority of riders and trainers.

A major obstacle, however, needs to be eradicated: an erroneous theory, which like a drug is feeding the dream that one will be winning while simultaneously destroying the partner without which one cannot win.  It was clever for the lawyers of the Rollkur’s proponents to raise the question, “Is the Rollkur painful for the horse.”

Pain cannot be scientifically measured or specifically attributed to a neck posture. The most common way to be aware of pain is facial expression and body language. The suffering, the desperation, the supplication, and then, even worse, the absence of any emotion visible in the facial expression and eye of the horse working with the upper neck overly flexed have outraged millions of riders and trainers all over the world. The awkwardness and discomfort of the horses’ body language have disgusted practically every rider and trainer possessing ethics and decency.

4 thoughts on “Submission and domination: Rollkur belongs in the dark ages”