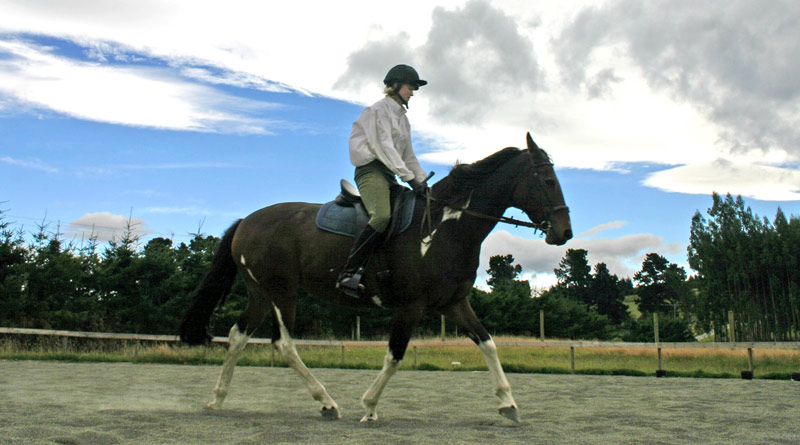 Researchers investigating the thorny issue of rider weight say the problems of less than ideally fitting tack appear to be accentuated markedly by heavier riders.

Last week, the researchers took the first step towards tackling the issue of rider weight, investigating whether there were any short-term measurable differences when horses were ridden by different-sized riders.

The aim of the wider project is to develop evidence-based guidelines as to what constitutes excessive rider size under different circumstances. Such measures could then be put into action by the equine industry to prevent needless suffering and injury.

There has been considerable controversy about rider weight in relation to horse size in recent years.

Following the Saddle Research Trust Workshop in 2014 and a meeting of British industry representatives in 2015, an initiative was set up, coordinated by the British Equestrian Federation and the charity World Horse Welfare, to raise funds to support research into the topic.

As a result, a pilot study has been performed using six horses and four riders.

The riders all rode to a reasonable standard, but differed in body weight – being light, moderate, heavy or very heavy.

Each rider rode each horse, in a randomised order, and performed a standardised 30-minute exercise protocol that consisted mainly of trot and canter. The horses were ridden in their usual tack.

Researchers monitored gait subjectively and objectively, behaviour, forces under the saddle, alterations in back dimensions in response to exercise, heart and respiratory rates, and levels of the stress hormone cortisol in the saliva.

Horses were also assessed on their response to palpation of the back.

The aim was to determine whether there were measurable differences in these outcomes among riders of different weights.

All horses finished the study moving as well as when they started.

Whilst data analysis is ongoing, Animal Health Trust researcher Sue Dyson and her colleagues can confirm that there was a substantial temporary effect of rider weight as a proportion of horse weight (but not necessarily body mass index per se) on gait and behaviour.

It appeared that any adverse influence of less than ideally fitting tack was accentuated markedly by heavier riders.

The initial findings do not mean that heavy riders should not ride, but suggest that if they do they should ride a horse of appropriate size and fitness, with a saddle that is correctly fitted for both horse and rider.

The study highlights the need for further research, for which additional funding will be required.

Dyson is working on the project with Anne Bondi, from the Saddle Research Trust; Thilo Pfau and Russell Guire, from the Royal Veterinary College; Andrea Ellis, of Unequi; Laura Quiney, of the Animal Health Trust; Linda Roost, of De Zadel Consulent; Catherine Morris, of Breathe Saddle Fitters; and Andrew Hemmings, of the Royal Agricultural University.

The study was approved by the Clinical Ethical Review Committee of the Animal Health Trust.