Muscles don’t work alone. They are covered and connected with facia and functions as sophisticated networks.  Their main function is stability. Efficiency is intimately related to stability. Efficiency in cantering, jumping, dancing, demands powerful but light lower legs. Nature compelled with the contradictory demands of absorbing considerable impact forces and lightness, placing the joints under tension. Tensegrity allows articulations to absorb considerable forces through the support of tendons and associated muscles without having to increase mass and thus weight of the structure.

Our ancestors gravely underestimated the sophistication of the equine physique. From the simplistic idea that muscles move bones, equine researches have unraveled sophisticated dynamics where elastic strain energy stored in tendons, aponeurosis, muscles and fascia during the first half of the stride, and reuse for propulsion and swing during the second half. The phenomenon of storage and reuse of elastic strain energy considerably reduces the metabolic cost of locomotion. “The elastic energy stored in and recovered from tendons during cyclical locomotion can reduce the metabolic cost of locomotion.” (Cavagna et al., 1977; Alexander, 1988; Roberts et al., 1997). 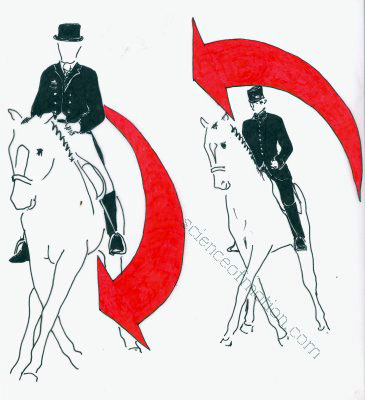 Elongating a muscle does not enhance the range of motion. The cycle of locomotion is a magisterial storage and reuse of elastic strain energy where tendons and aponeurosis are maintained under optimum tension by the associated muscles. Releasing a muscle jeopardizes the system and does not reduce the stress overloading the muscle. A horse can execute the same move using different muscles and the same protective reflex will likely contract and overload other muscles. “A visually identical hindlimb extension in late stance may be accomplished by only hip extensor muscles, only knee extensor muscles or any combination of these.” (Liduin S. Meershoek and Anton J. van den Bogert. Mechanical Analysis of Locomotion.) The antidote for protective reflex contraction is not relaxation but instead coordination. The therapy is identifying and correcting the root cause of the abnormal stress.

The problem with equines is that the “exercises” are also dressage movements. They were originally gymnastic exercises but they became defined by judging standards to be presented in the show ring. The criteria through which the movements have been defined, are based on aesthetics with little understanding of the underlying biomechanical factors. As a result, the movements defined by the judging standards have no therapeutic value. Even if they are labelled with the same names, the exercises used for education and rehabilitation are updated versions of the movements presented in the showring. For example, the above silhouette is the exact copy of a photograph. According to the caption, the “quality” of the half passes allowed the horse to win the test. Such half pass might fit the judging standards but is, in respect of equine biomechanics, a dysfunctional move combining lateral bending with inverted rotation.

The arrow underlines the rotation of the dorsal spines toward the outside of the bend, inverted rotation. Instead, proper rotation shifts the dorsal spines toward the inside of the bend. “In the thoracic spine, as is the case during lateroflexion, the spinous processes bend in the concavity.” (Jean Marie Denoix) The silhouette of the military rider illustrates the proper correlation between lateral bending and the appropriated rotation. 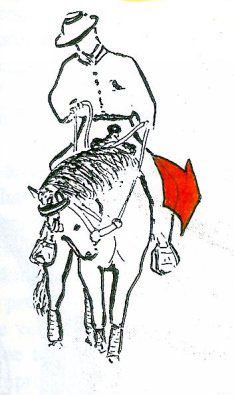 While ignored in most riding school, transversal or axial rotations are always coupled with lateral bending. “In the cervical and thoracic vertebral column, rotation is always coupled with lateroflexion and vice versa.” (Jean Marie Denoix) From hock to stifle problems, to sacroiliac strain, to kissing spine, to navicular syndrome, to cervical arthritis, inverted rotation of the thoracic spine has been found to be a major root cause. Hence, the therapeutic value of any exercise involving lateral bending depends on the sound correlation between lateral bending and transversal rotation.

Neutral balance means that the rider’s body weight is not acting back to front or front to back. The driving seat, for instance, places the rider further back on the gluts. The body weight is acting back to front, hampering the rider’s capacity of bending the horse thoracic vertebrae. If the rider turns the pelvis to the right suggesting right lateral bending, the left side of the pelvis and therefore the left hip and left upper thigh will go up and no lateral bending of the thoracic vertebrae will occur. Facing the direction of the bend involves the whole rider torso. The head, the shoulders, the back, the pelvis and the upper thighs have to work as a one facing the exact same direction. There is a concept of integrity that is not understood by theories advising twisting the spine with the rider’s shoulders facing the horse’s shoulders and the rider’s pelvis aligned with the horse haunches. The equitation of gestures, the aids, demeans the dialogue with the horse at the level of cues and the simplistic concept of stimulus/response. The horse has a much more refined sensitivity. He will submit to gestures like a slave but his comfort zone is at the subtler level of energy created by nuances in muscles tone. Nuances in muscles tone within the rider’s body creates energy that is part of the dialogue with the horse.

The concept of energy demands integrity of the rider’s body. Any twist of the rider vertebral column, such as the shoulders turning more than the haunches or the rider’s head turned more than the whole vertebral column will dissipate the energy created by the tone of the back and abdominal muscles. Often during lectures or lessons, I make riders feel the energy created by my back muscles and they are blown away feeling clear dissipation of the energy when I turn my head or twist my spine. The infamous “looking at the center of the circle,” is a concept that has to be consigned at the horse’s museum as a curiosity of the past.

From the point of view of exercise therapy, the bending of the thoracic spine is the main benefit of half pass. As the bending occurs in the direction of the motion, an interesting muscular work stimulates the muscles mobilizing and stabilizing the thoracic vertebrae. When applied as a gymnastic exercise and therefore in respect of equine biomechanics, instead of judging standards, half pass stimulates the muscles creating lateral bending and transversal rotation in the thoracic area as well as the extrinsic muscles of the forelegs. The move helps horses suffering from hollow or sway back. It is of course more efficient in preventing the problem, but does help in slowing down the process when the instability of the thoracic vertebrae and consequent sway back has already started.

The horse can of course execute the move by moving the haunches ahead of the shoulders. This is the common error of lateral bending coupled with the inverted rotation. The inside leg and the outside rein might comply with the judging standards replacing the shoulders ahead of the haunches, but does not correct the inverted rotation of the thoracic vertebrae. This is what the rider did in the picture. The education of the half pass as exercise therapy demands focusing on proper correlation between lateral ending and transversal rotation. The lateral displacement is the entertaining part of the move but is secondary. Instead of bending, wrapping the thoracic vertebrae forward and around the rider’s inside leg, the horse can easily escape sideways. The horse pushes laterally on the rider’s inside leg. The horse moves sideways toward a winning ribbon but with a dysfunctional and crooked body.

Half pass is a very effective gymnastic exercise but only when the lateral displacement comes as a result of proper lateral bending of the thoracic spine forward and around the rider’s inside leg. By contrast, the lateral escape – where the horse is moving in the oblique with a bent neck but a straight thoracic spine, or when lateral bending of the thoracic vertebrae is coupled with inverted rotation – is a crippling move.