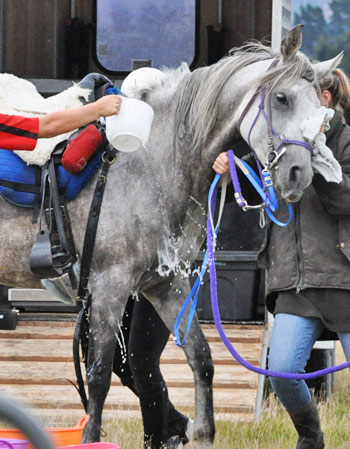 Grooms around the world are able to access an online course to help them understand the anti-doping and medication rules that apply in equestrian sport.

The association’s communications director, Liz Daniels, highlighted the course following recent cases before the FEI Tribunal in which well meaning grooms or other helpers used substances that resulted in horses returning a positive blood test.

In one case, a rider’s mother produced a tonic which resulted in her son’s horse testing positive for caffeine, which was contained in one of the ingredients, guarana.

In another case, an experienced groom uplifted the wrong off-the-shelf antibiotic cream from a Walmart store. The added pain relief in the product triggered a positive test.

In another cases this month, a groom injected a horse before an endurance race thinking it would do no harm.

Daniels stressed the importance of grooms receiving the correct training around prohibited substances.

She said it was an important issue and the association in Britain was trying to promote better education for grooms about the risks.

To this end, it launched its Groom Clean campaign early in 2016, which includes the interactive online training module.

The 30-minute course covers both the technical aspects of anti-doping, the testing procedure and practical stable management tips on how to avoid an anti-doping rule violation.

On completion of the course, participants will receive a Groom Clean certificate.

Anyone is welcome to take part in the course – grooms, riders, trainers, students, owners or parents.

Daniels said tickets to undertake the course were valid for the next four hours, so she urged people not to buy one until they were ready to take part in the course.