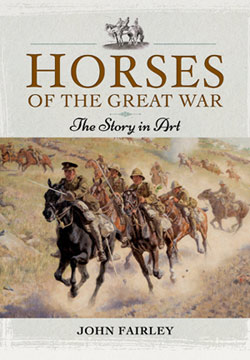 Equines in warfare typically conjure images of cavalry chargers at speed. In reality, however, warhorses were primarily workhorses — pack and draft animals — providing motive and tractive power for all three military arms — cavalry, artillery, and infantry. In the Great War of 1914-1918, as in the previous three centuries of European conflict, equines provided the main source of energy: many served as chargers and troop mounts, but many more transported supplies to battle; hauled artillery in battle; and carried wounded and dead from battle.

Military historians have devoted close attention to cavalry in the Great War, ranging from classic studies, such as the Marquess of Anglesey’s magisterial History of the British Cavalry, 1816-1919 (1973-97), to recent revaluations, such as David Kenyon’s Horsemen in No Man’s Land: British Cavalry and Trench Warfare, 1914-1918 (2011). Historians also have written works on equines per se in the Great War, such as Anne Hyland’s The Warhorse in the Modern Era: The Boer War to the Beginning of the Second Millennium (2010), and Graham Winton’s exhaustive study, “Theirs Not to Reason Why”: Horsing the British Army, 1875-1925 (2013). Most studies in English, not surprisingly, focus on Great Britain and the Empire.

Two very good recent books, more pictorial than scholarly in orientation, provide overviews of equines in their many roles in the Great War. The earlier of the two, Simon Butler’s The War Horses: The Tragic Fate of a Million Horses in the First World War (2011), contains 188 illustrations in 144 oversized pages. The illustrations vary widely in genre (photographs, paintings, posters, and so on), as well as in shape and size, and the horizontal layout features dynamic and artful visual editing. Though primarily pictorial, the book offers an informed running commentary on equines in the War supplemented with robust and informative legends to the illustrations.

The newer book, and the one under review here, John Fairley’s Horses of the Great War: The Story in Art (2016), complements Butler’s War Horses. It contains 67 illustrations, almost all paintings, in 136 oversized pages. The plates are mostly full-page and boast high quality resolution, though the vertical layout is static and staid — common in books on art. Deeper and broader than Butler’s commentary, Fairley’s text comprises eleven chapters starting with the recruitment of equines; treating their roles in cavalry and artillery, as well as on the Western, Eastern, and Home Fronts; and concluding with the disposal of horses following the Armistice — all subjects as “reflected” in art.

The artwork in Horses of the Great War is not only stunning, but also nicely curated: it achieves high quality and variety without sacrificing thematic coherence. The 67 paintings represent 37 artists and, in three cases, “schools.” Artists include celebrated equestrian painters, such as Lionel Edwards, Gilbert Holiday, and Sir Alfred Munnings, all noted for sporting scenes, and Lucy Kemp-Welch, noted for studies of draft horses. They also number painters primarily known for other genres, such as the portraitists George Lambert, Stanley Spencer, and William Orpen, and the etcher of landscapes, James McBey. While most artists warrant one picture, a few have multiple entries — McBey tops the list with five.

Selecting the works for inclusion cannot have been easy: the Imperial War Museum alone lists over 5000 holdings in its Concise Catalogue of Paintings, Drawings and Sculpture of the First World War 1914-1918 (1924, revised 1963).

Fairley’s judicious selections include a few iconic and often reproduced paintings, such as Lionel Edwards’s At the Front! and Fortunino Matania’s Goodbye Old Man, but also many more works rarely encountered. The selections include all relevant genres and subjects — grand panoramic battle scenes, studies of equines at work, equine and equestrian portraits — and they represent many period styles and aesthetics. The pictures alone are worth the price of admission.

Fairley’s text — his “story” of horses in the Great War — surveys ground well trod by academic specialists in the field, but not widely known outside of those circles. General readers might find particularly eye-opening his coverage of the Desert Mounted Corps in the Mesopotamian and Palestinian campaigns (with, respectively, 60,000 and 100,000 British and Empire horses in the field at any one time); his homage to mules — “camouflaged behind the glamour of the cavalry horses and the magnificence of Percherons and Shires” — who served and died in the tens of thousands; or his discussion of the Women’s Land Army and the accomplished horsewomen who — given the “shortage of skilled horsemen” on the Home Front — managed Remount Service depots and trained horses for duty.

Virtually everyone writing on equines in the Great War fixes on their ghastly “fate” (to use Butler’s word) and its horrific scale. Millions of equines served bravely, worked tirelessly, and died miserably: the British Remount Service alone purchased some 1,250,000 horses during the war and recorded “wastage” of 530,000 animals (by death, sickness, casting, or other causes); France, Germany, and Austria together sacrificed some 3,000,000 equines. Horses also fared worse than humans following the Armistice: the British military held 896,000 equines on November 11, 1918, but needed only about 20,000 for its post-war peacetime establishment — the Remount Service and the Disposal of Animals Branch of the Army Veterinary Corps disposed of the rest. Hundreds of thousands were euthanized, slaughtered for meat, or sold — most to productive lives in agriculture or transport, but many into what amounted to bondage.

Fairley tells that sad story well. On the Western Front, troop mounts and artillery horses fell victim primarily to shelling, but also to poison gas, drowning in mud, and euthanasia by gunshot. On the Eastern Front, cavalry action met modern war, and charges into artillery and machine gun fire led to “fearsome carnage amongst the horses.” In Fairley’s apt phrase, it was a “dreadful symmetry of mechanized destruction and improbably dashing bravery.” The vast number of resulting equine carcasses required mass burial, burning, or other solutions: burial being unfeasible on Gallipoli, for example, carcasses were carried out to sea, cut open, weighted with stones, and cast overboard. As Hemingway wrote in a related context: “all stories, if continued far enough, end in death and he is no true-story teller who would keep that from you.”

Fairley tells less well — at least verbally — the story of how artists told the story of equines. He provides interesting facts: Great Britain, for example, officially commissioned McBey, Munnings, Orpen, “and a score of other artists” three years into the war in 1917; the United States, by contrast, commissioned “eight official American war artists” immediately upon entry in 1917. Overall, though, Fairley focuses more on events than on their representations: he makes cursory reference (sometimes only a sentence) to the artists reproduced, and he approaches their art like a historian, treating paintings more as documents with illustrative value than as objects with aesthetic value.

Though clear and informative, Fairley has some dubious moments. He bases an unpersuasive claim that “the role of the gun horse has vanished from history” on one “authoritative recent history” plus an undocumented allegation that “the Royal Artillery has no records of the thousands of horses who hauled the guns.” And he expresses surprise that Great War painters paid equines far more attention than did poets, though painters throughout history have paid equines more attention than have poets, and painters in the Great War, moreover, earned commissions for art, not poets for poetry. (Canonical Great War poets like Siegfried Sassoon and lesser lights like T.A. Girling, in any case,did treat equines as subjects.)