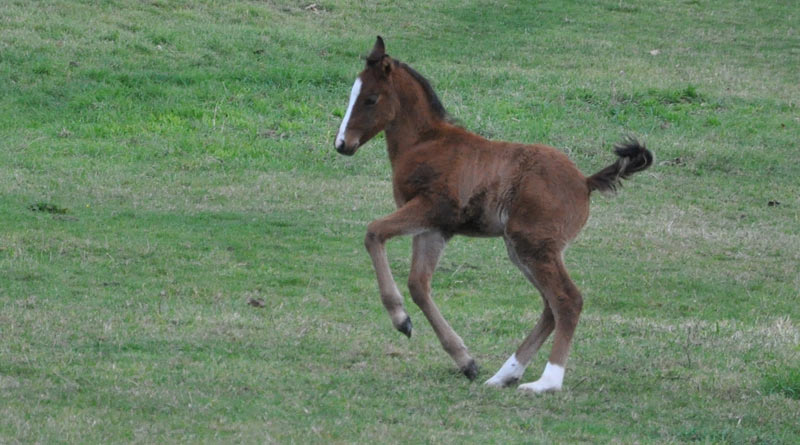 Seasonal changes in the metabolic rates of mares are believed to be behind differences identified by researchers in foal development which are measurable at birth.

They found that while the birth weight of foals was not affected by season, they did detect other important differences.

Foals born closer to the start of the year – that is, closer to the depths of the northern hemisphere winter – were shorter at the withers, with shorter legs than foals born later around the traditional spring window.

These season-dependent size differences persisted until at least 12 weeks of age, Professor Jörg Aurich and his colleagues reported in the journal Theriogenology.

They suggested that the smaller size of the foals was caused by seasonal changes in the maternal metabolic rate in the mare, where a reduced metabolism in the winter coincided with a phase of rapid foetal growth.

Maternal nutrient supply to the foetus influenced foetal development in most species, they wrote.

Such nutrition-induced insults during critical periods of pregnancy can alter the observable gene-induced characteristics (phenotype) of the offspring and can lead to abnormalities in the adult.

Such changes in foals could potentially affect their metabolism and athletic performance in later life.

The practice of advancing the equine breeding season via light programmes or hormone treatments with the aim of having foals born as early as possible in the northern hemisphere year may have to be questioned, they said.

The researchers also found that the weight of the placenta and its surface area tended to be reduced in foals born closer to the depths of winter.

The study team from the University of Veterinary Medicine Vienna had divided the foals from the 27 mares into three groups, depending upon when they were born.

The height at the withers were consistently lower in group one (born in late winter) than in the later-born groups, while foal weight did not differ among the groups.

The fetlock to carpus, carpus to elbow and poll to nose length were shorter in group one than in groups two and three.

Neither gestation length nor sex ratio of foals differed among the groups.

Discussing their findings, the researchers said their study demonstrated an effect of season on foetal and postnatal development in horses, with foals born in February and early March being shorter than those born thereafter until May 1.

“A reduced height in foals born early in the year was not restricted to the first days after birth but persisted until at least 12 weeks of age.”

In contrast, there was no effect of season on birth weight of the foals and subsequent weight development, thorax circumference and crown-rump length.

The abstract of the study can be read here.