The story of a showjumper whose life was threatened by eyesight issues has been told in a new book, which will benefit an equine ophthalmology clinic.

Derrick, an eight-year-old Dutch Warmblood gelding, developed cataracts in both eyes. As a talented jumper whom owner Terri Herrera planned to convert to a hunter, Derrick’s intended career didn’t allow much room for imperfect vision.

After consulting with her veterinarian in Southern California, Herrera decided to make the eight-hour drive north to see the equine ophthalmology experts at the UC Davis veterinary hospital. It was there that she met Dr Mary Lassaline, whom she credits with saving Derrick’s life.

On Derrick’s initial visit to Davis, Lassaline elected to insert cyclosporine implants into each eye. These implants delivered therapeutic levels of cyclosporine to the eye, thus decreasing the frequency and severity of uveitis flare-ups.

After a two-night stay, Derrick left the hospital and soon returned to work. Although the vision in his right eye was compromised, he was able to compete successfully that season in the hunter division with vision only in his left eye.

Herrera praises Lassaline’s work, stating that without Lassaline’s intervention, she would never have seen Derrick compete, an experience she greatly treasures.

Several months later, however, Derrick’s vision worsened. A mature cataract in his left eye threatened blindness. Believing nothing could be done, Herrera made the heart-wrenching decision to euthanize him after consulting with local veterinarians,  and canceled Derrick’s future appointment at the hospital, explaining the situation.

Within minutes, Lassaline called her back, determined to save Derrick’s life. Derrick spent the next 40 days at the hospital receiving cataract surgery and continual care from the veterinarians, technicians and students. 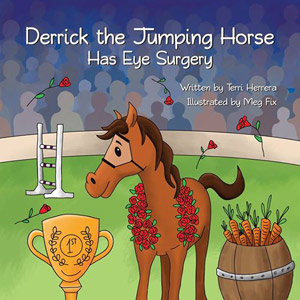 Despite their best efforts, Derrick ultimately lost his vision. But Herrera considers the surgery and her entire experience at UC Davis to be an overwhelming success, because it certainly saved Derrick’s life.

Herrera was inspired to write a children’s book based on Derrick’s ordeal to encourage others. Proceeds from Derrick the Jumping Horse Has Eye Surgery will be donated to the hospital’s Equine Ophthalmology Service and to pediatric uveitis research. Herrera views this book as part of Derrick’s new purpose.

Derrick is now walking and trotting under saddle, and he continues to be Herrera’s special equine companion. She hopes his story will inspire others.

“I thought Derrick’s purpose was to be a champion hunter,” Herrera said.

“Now I know the truth: Derrick’s purpose was — and still is — to inspire others to discover their true purpose, which oftentimes is not what it initially seems.”

Derrick the Jumping Horse Has Eye Surgery will be available from March 17 on www.derrickthehorse.com.