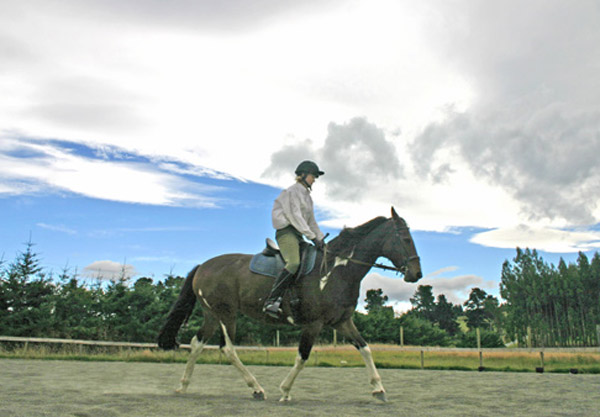 One in three owners surveyed in a New Zealand sport horse study reported calling in a farrier in the previous 12 months to attend to a hoof-related problem.

This remedial work often involved a veterinarian, the study team reported in the Journal of Equine Veterinary Science.

The study, centered at Massey University, sought to gather preliminary data about New Zealand owner-reported injuries to showjumping and dressage horses, as well as farriery and hoof-care information.

Most of the horses were medium to upper-level performers, with an average age of 9. They had been in their current rider’s ownership for an average of 28 months.

The horses were trained on average for 45 minutes a day, six days a week, on a sand or sand-mix arena.

They found that more than one in four horses – that’s 26 of the 96 animals in the study – had training layoffs for seven or more days, generally associated with lameness diagnosed by a veterinarian.

The average time off was 26 days, with one horse owner reporting a spell that lasted 93 days.

During the preceding 12 months, 33% of the riders had been working with their farrier on hoof-related issues. This remedial work involved a veterinarian in 14 of the 30 cases, or an allied health practitioner in six of the 30 cases.

The front feet of 89 of the horses were photographed and measured for later analysis.

Uneven feet were identified in 16 of the 89 horses, but were not linked with an inability to train, possibly reflecting the minor variation between feet, the researchers said. This represented 18% of the horses, yet only 5% were receiving remedial shoeing to address it.

Uneven feet were associated with variations in heel length and angle measurements and a greater sole length and reduced sole width, rather than being smaller and boxy.

There was an association of uneven feet with the dressage horses more than showjumping horses, they wrote.

Hoof rings were seen in just over a third of the horses – in 38 of the 89 animals.

Most horses were hot shod with conventional steel shoes, this being the case for 67 of the 89 horses.

The researchers said the short ownership length reported in the survey reflected the dynamics of horse ownership.

“The use of arenas for training was higher than expected and may reflect the sampling of a population of horses owned by professionals and competitive amateur owners,” they said.

The researchers said the lack of variation in shoes used was surprising. “This trend may reflect the traditional nature of equestrian sport and that different types of shoes are not used unless there is a perceived problem.

“When working on remedial shoeing, there appeared to be good coordination between the farrier and veterinarian,” they noted.

The study team concluded that management of the horses was similar to previous reported studies, with most horses managed at pasture for 12 or more hours a day.

Rogers, Gee and Bolwell are affiliated with Massey University; Dijkstra and Sinnage with Utrecht University in the Netherlands.