The Horse Travel Handbook, by CuChullaine O’Reilly, The Long Riders Guild Press, 286 pages, available from Amazon UK and Amazon US. 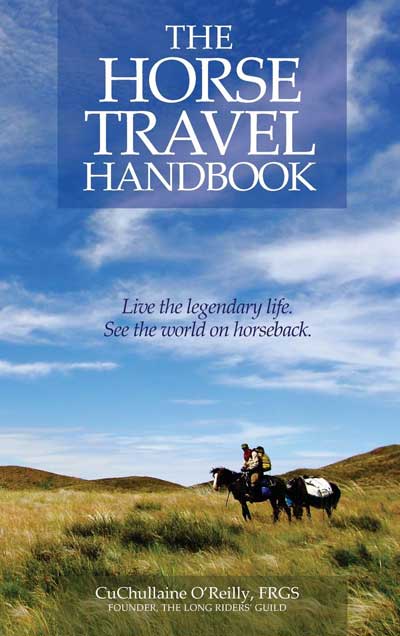 It is hard to imagine a better individual to write a comprehensive guide to travelling the world by horseback than CuChullaine O’Reilly.

O’Reilly founded the Long Riders’ Guild, which today boasts members from 42 countries. Membership is contingent upon riders making an equestrian journey of at least 1000 miles.

He no doubt learnt much about the many challenges of life in the saddle when, in 1983, he embarked on an 1100-mile ride through Pakistan. He departed from the bustling hub of Peshawar, on a loop that would take him through one of the last great frontiers.

O’Reilly is able to write from experience, but it is the knowledge gleaned in the years since that helps set The Horse Travel Handbook apart.

O’Reilly has since had a hand in many epic journeys by horseback, providing advice and support to people all around the globe who set their sights on what is known among these equestrian explorers as a Long Ride.

As the Guild founder, he has stepped in to help Long Riders out of everything from political pickles to scrapes with the law in some of the world’s most inhospitable places.

One suspects that he has seen and heard it all. He has seen the price paid by some for ill-preparedness and naivety. I know, as a friend of some 10 years, he has counselled some against overly ambitious or ill-conceived plans.

After years of dispensing such bespoke advice, O’Reilly turned his attention to writing his guide to travel by horseback, distilling into a 286-page volume the wisdom of not only his own time in the saddle, but that of the many dozens of Long Riders who rank among the world’s greatest horseback explorers. These are the people that O’Reilly helped to see the world.

His hardback field guide is an offshoot of his Encyclopaedia of Equestrian Travel, which contains the wisdom and warnings of no fewer than 393 Long Riders.

As O’Reilly puts it, the encyclopaedia takes care to identify each Long Rider who shared insights and information. The handbook distils that knowledge into a guide suitable to be taken by Long Riders on their expeditions.

The book is well organised and provides quite remarkable detail. The first chapter deals with preparation – with a sobering caution for riders to quickly separate the reality from the romance.

O’Reilly puts it thus at the start of his guide: “The idea of equestrian travel is always romantic because one never realizes what lies ahead. There is instead a hazy notion of you and your horse riding peacefully across a nature-filled landscape.

“In such an equestrian reverie you never think about where you’re going to sleep at night because the sun is always shining. Nor do you give any thought to what you and your mount are going to eat, because in your daydream you’re too busy being happy.”

He warns: “Equestrian travel requires the acquisition of specialized skills. Do not let your enthusiasm overrule your common sense. Without planning, practice, and a bit of luck, your chances of success are minimal.”

The book’s comprehensiveness rather belies its description as a handbook. The section on preparation deals with everything from age and ability to dealing with finances and tackling the necessary paperwork.

The all-important section on horses deals with everything from selection and training to feeding and shoeing the animal.

The third section tackles equipment before O’Reilly turns his attention to the challenges. This will perhaps be the real eye-opener for most would-be equestrian travellers.

O’Reilly is candid about what lies ahead. “Long Riders cannot afford to harbour a timid heart,” he says.

“To get somewhere, you’ve got to be willing to risk something.”

O’Reilly’s list of geographical challenges ranges from mountains and deserts to rivers, jungles and quicksand. Then there is the unpredictability of the weather and the worries of traffic even before he turns to the less obvious challenges.

There is the risk of attacks, from outlaws to insects and wild animals. O’Reilly discusses the challenges that borders and bureaucrats pose. And then there are the manifold challenges of maintaining the long-term health of one’s mount, not to mention the rider’s own wellbeing.

The handbook traverses the nuts and bolts of the journey, from hospitality to hostility, to the vagaries of life on the road.

O’Reilly stresses the importance and ethical responsibility that falls upon every Long Rider to maintain the health and wellbeing of the horse.

“Unfortunately there are individuals who would sacrifice the horse to satisfy their ego. No one who mistreats a horse is fit to own one,” he writes.

He continues: “There is more to equestrian travel than tying knots and picketing horses. Discovering your ethical responsibilities is a vital part of reaching your ultimate emotional goal.”

It is worth bearing in mind that this is not just O’Reilly’s take on life in the saddle. He has incorporated the wisdom of a raft of Long Riders to produce this important and unique guide.

I doubt anyone else in the world is so ideally placed to write such a volume. It is a credit to O’Reilly that he sat down and got the job done.

Perhaps the last word should go to the author: “Equestrian travel is, on the one hand, simply a matter of transportation. Yet as history has repeatedly demonstrated, Long Riders are far more complex than that. They consistently refuse to join the mainstream. Instead, they set their own standards and maintain their own individual ideals.

“Over and over they demonstrate that’s it’s not about settling for who you are. It’s about believing in who you can become.”

One thought on “Saddled with ambition: Guide lays out the essentials of equestrian exploration”