Horse whisperer, animal communicator and energy healer Anna Twinney has reached out to horse owners in China and Mongolia to share her equine experience.

Although Twinney is booked solid up to 18 months in advance, she accepted an invitation from the Chinese branch of the American Quarter Horse Association to visit Beijing and Mongolia.

“It’s truly a country of contrast,” Twinney said. She traveled from the metropolis of Beijing, with its economic success and high energy, to areas in the Mongolian countryside where indoor plumbing was an absolute luxury.

One topic that particularly interested the people in the Mongolian crowd was the difference between Twinney’s “Reach out to Horses” methodology and their traditional style of “horse breaking” (ie, taking hold of the horses’ ears, turning their necks and manhandling them). The entire village, vet, farrier and endurance team came to watch the training. 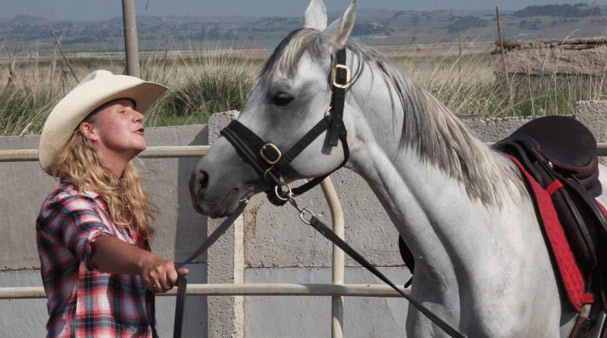 “They were astounded to see me approach a horse in moments that took them two hours to touch, and another wild horse who came around to appreciating and enjoying the lesson,” Twinney said.

“He accepted a halter without fear or force, all through gentling methodologies.”

Twinney’s hosts in China were so pleased with their record crowds, and the valuable knowledge and insight she shared, that upon her return to Beijing she was invited as the prominant guest speaker to open the new western saloon. Twinney has since been invited back to China and is planning a second trip in 2017.

“When I came to America 20 years ago, my goal was to learn as much as I could and bring this new-found knowledge back to the police force. I wanted to spread the word to my fellow Bobbies, to show this small community that there was a better way. Never in my wildest dreams did I imagine I would have the opportunity to share my message of compassion and communication, and open up the way to a better partnership for people and horses, all over the globe. This is a very exciting time and I can’t wait to see where this message will take me next.” 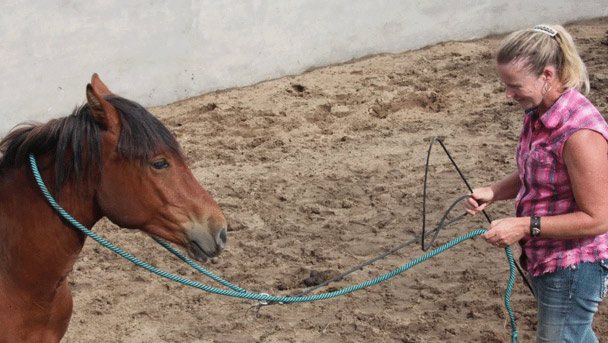 Often, in promotions for clinics, the question “Language Barrier?” is asked in regards to people understanding their horses. Though Twinney was outfitted with excellent translators, difficulties in understanding remained.

“It was a bit like being a horse, I imagine,” Twinney said. “I had to pay extremely close attention to body language, to facial expressions and interpret the intentions and ideas of the course attendees.”

She said she spent much time showing students about connection and communication.“These students were very interested in problem solving. They really absorbed the information but were in great need of help when things weren’t going smoothly.”

Twinney worked with the students to help them understand that connection is the first pathway to problem solving and it’s achieved easily with the right mindset and skills. She introduced the Chinese students to those new skills and knowledge to help overcome their obstacles.

Attendees at the Beijing event were some of the most prominent horse owners in the country and Twinney’s course was hosted at one of the first modern equestrian facilities to be built in the city. The event broke attendance records and attracted scores of television and newspaper reporters.

Twinney said the Chinese were extremely hospitable. At the end of her trip, she was treated to a trail ride in the Mongolian countryside. It started out at a rather fast pace, until Twinney learned she was riding with the national Chinese endurance team. She describes her few several minutes of the views as “blurry” but mercifully, her hosts slowed down so she could enjoy the sights and absorb the fact that we was actually, on a trail ride … in Mongolia!

Anna Twinney is the founder of Reach Out to Horses, based in the foothills of the Rocky Mountains in Golden, Colorado.  As an internationally respected Natural Horsemanship Clinician and Trainer, Animal Communicator and Reiki Master she travels the world teaching the art of creating a trust-based partnership between Humans, Horses and all Animal Companions.

Visit Reach Out To Horses.