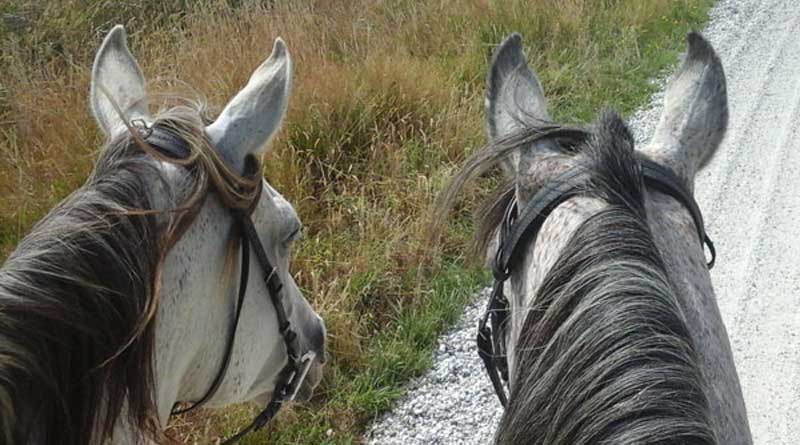 Researchers have explored the heart performance of endurance horses with Arabian bloodlines, finding only a weak relationship between career kilometers and the dimension of the left ventricle – the powerful cardiac chamber that pumps blood out to the body.

The study team in France focused on 340 endurance horses, of which 201 were purebred Arabians, 100 were part-bred Arabians, 24 were Anglo-Arabians, and 15 were categorized as “others”.

Echocardiographic measurements were recorded between 2011 and 2014 during field exercise tests and at the annual finals of the French National Championships for young endurance horses.

The field tests were organised by the research group for all interested endurance horse owners four times a year. Only horses aged between four and six and with at least one purebred Arabian parent were included in the study.

The researchers wanted to examine the relationship between body dimensions, body weight, and other parameters on heart dimensions in the horses as assessed through the imaging. Their findings have been reported in the journal, BMC Veterinary Research.

Dagmar Trachsel and his colleagues said the heart’s physiological adaptation to aerobic training led to an increase in heart chamber size, and was referred to as the Athlete’s heart. However, heart dimensions were also related to body weight, body size, growth and (in some species) breed.

They noted there was little published scientific research on the relationships between heart dimensions and growth or aerobic training in Arabian-related endurance horses.

They measured body length, thoracic circumference, wither height and body weight in the competition-fit endurance horses, as well as taking into account their age, gender and breed. This was assessed in the study against the echocardiographic measurements.

They found that the dimensions of the left atrium – the chamber that holds blood returning from the lungs and pumps it to other areas of the heart – and the left ventricle increased with age, whereas left atrial and left ventricular functional indices did not.

“Although there was no gender difference for left ventricular dimensions, females had larger left atrial dimensions,” they study team wrote.

“In terms of breed, Anglo-Arabians had the largest left ventricular dimensions,” they reported.

They said the increase in heart dimensions with age indicated ongoing growth in the population of 4 to 6-year-old horses.

The study team observed what they said were small changes in the heart associated with the initiation of endurance training. Left ventricular dimensions were influenced only weakly by parameters associated with exercise intensity.

Discussing their findings, the researchers said all external variables included in the analyses influenced to some extent several of the measured dimensions.

In the study, the purebred Arabians were the smallest and lightest horses. Body dimension and body weight were highest in the Anglo-Arabians, which in turn led also to larger left-ventricular mass.

However, using regression modeling, they found that the horses other than purebred Arabians were associated with smaller left atrial measurements.

“This indicated that the smallest horses in our population did not necessarily have the smallest hearts and hence that other factors must be considered.”

Body weight and body dimensions were higher in the five-year-olds than the four-year-olds, presumably due to ongoing growth.

In contrast, the smaller body dimensions found in the six-year-olds – especially wither height and body length, which are less influenced by body condition – might have been due to the selection of smaller, lighter, more compact horses for more demanding competitions.

“Indeed, high body weight in endurance horses has been associated with failure to finish competitions, particularly due to lameness,” they noted.

The horses in the six-year-old group covered a greater distance in competition (career kilometers) and thus were certainly subjected to harder training, which may have resulted in a lower body weight.

“However, too low body weight or too low percentage of body fat is detrimental in human athletes.

“The optimal percentage of body fat has not yet been established for horses, although body fat was around 8% in well-performing athletic horses,” they noted, citing other research.

“As is the case for human athletes, the optimal percentage of body fat doubtless varies from one discipline to another.”

The authors said although growth certainly affected left-ventricular dimensions, the latter was also greatly affected by other factors. In particular, training was a strong stimulus for cardiac hypertrophy.

They said they had detected a weak but significant association between career kilometers and some of the left ventricle measurements.

The absence of a change in relative wall thickness in the heart indicated that the heart’s adaptation to exercise in the study population was more similar to that seen in Standardbreds than to that seen in Thoroughbreds, or elite Arabians.

“Further, this finding might also illustrate differences in training practices among different breeds.”

They said they did not find any association between left atrial dimensions and career kilometres.

In contrast to other studies, gender did not appear to influence left venticular dimensions in the study population.

“One explanation could be that the intensity of the aerobic training in endurance horses at this age is not high enough to bring out the full potential for hypertrophy in intact males.

“Another explanation might be related to the custom of French endurance trainers/owners to breed females at the age of five years. Gestation may have induced changes in heart dimensions (as seen in humans and dogs), although these changes are usually reversible.”

In their conclusion, they said the main changes in cardiac dimensions were observed between age groups and were probably due to on-going growth, even though the initiation of endurance training may also have had some effect.

“In particular, left ventricular measurements were related (albeit weakly) to performance parameters, which might reflect the adaption to the initiation of aerobic training.

“Gender differences were not apparent in our young population, although there were significant differences between breeds.

“Despite being the smallest horses, purebred Arabians did not have the smallest hearts. Small body size might be an advantage in endurance competitions. However, other factors, such as the heart’s dimensions relative to the body dimension, or the capacity of a rapid heart-rate recovery after the race, appear to be important and should be studied in the future.”

The full study, published under a Creative Commons License,  can be read here.