At the turn of the last century, the Italian cavalry officer Captain Federico Caprilli (1868-1907) reinvented the jumping of horses over fences, changing both military equitation and the civilian equitation that, in a few short decades, would supplant it. Caprilli’s achievement may not have equaled in magnitude the reinventions of core intellectual disciplines, shaping modernity and its vision of humanity, made by Einstein, Freud, or Picasso. Caprilli’s genius, however, equaled theirs in originality. 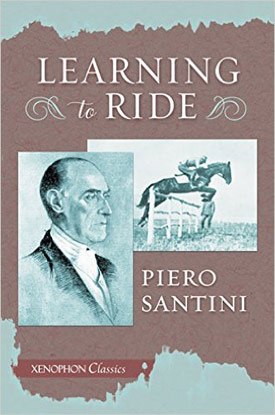 Caprilli based his new system for jumping and cross-country riding—subsequently known as the “forward seat” — on his observation that the horse naturally tends to bascule while free jumping and on his critical insight that the rider, to achieve maximum preservation of the horse and effectiveness in the field, must facilitate that tendency rather than impede it. A visionary horseman and gifted rider, Caprilli not only developed the concept and refined the techniques of “forward riding,” but he also put those techniques into practice, to judge from photographs, with apparently effortless perfection.

Caprilli died prematurely at age 40, the unfortunate result of a riding accident, and left behind him precious little writing on his system. Like masters in many fields, however, he had the good fortune to be survived by brilliant students (and students of students) who not only proselytized his system, but also, in their own writings, fleshed out its details and implications. In Caprilli’s case, these students included four international cavalry officers of distinction and influence: Piero Santini and Paul Rodzianko, students of Caprilli himself, and Harry Chamberlin and Vladimir Littauer, later students of his school.

Major Piero Santini (1881-1960), arguably Caprilli’s most ardent disciple, achieved recognition and praise as an equestrian, instructor, author, and tireless advocate for forward riding — particularly in North America. (The bilingual Santini not only translated Caprilli into English, but also wrote several books in English and issued them in the United States.) Santini published Riding Reflections, his first book, in 1932, followed by The Forward Impulse in 1936, Learning to Ride in 1942, and, perhaps most important, The Caprilli Papers in 1967 — the last a compilation of Caprilli’s teachings now long out of print, rare, and expensive.

Santini described Learning to Ride, in its opening pages, as an effort to “crystalize the principles” advanced in Riding Reflections and The Forward Impulse and to establish the “minimum that … beginners should know on these lines before taking any active part in field or ring.” Its subject is the “tuition of the rider,” rather than the “instruction of the horse.” One could say that Riding Reflections and The Forward Impulse aimed to introduce the forward seat to otherwise experienced riders, while Learning to Ride aims to introduce the seat to neophyte riders and to provide their instructors a guide for teaching it.

Learning to Ride rests on two latent premises that explain its departure from its source books as well as its lengthy proposal of “rules for a riding competition” for young riders: 1) civilian riders were ready for “field or ring” only if and when properly trained in the forward seat, so beginning forward riders and beginning riders, from this perspective, were in the same situation; and 2) civilian riders were a fast growing community (and market) of amateurs that required constant rejuvenation through recruitment and training of young riders and through competitions whose rules did not place forward young riders at a disadvantage.

Santini’s sacred mission to convert nonbelievers to the truth of forward riding, put differently, merged with his more secular goal of advancing vital amateur equestrian sports in a world without professional mounted cavalry. He sought “to produce civilian cross-country riders and not troopers,” and to help those riders realize “the possibility of enjoying the greatest sport of all in the certainty that their mounts will enjoy it with them” — “the ultimate aim of all good horsemen.” This focus on riders for the well being of horses—“keeping horses calm and saving unnecessary wear and tear” — comes straight from Caprilli.

Not surprisingly, simplicity and economy emerge as Santini’s principal themes.“Simplicity [is] the motto of our method,” Santini writes, sometimes expressing simplicity as economy of means — “all that is necessary, but no more than is necessary” — and sometimes as what we now might call mindfulness: “that economy of physical and nervous energy which is one of the basic principles of our method,” an economy that enables “good riding — in the sense of comfort and freedom for horse and man and saving of nervous and muscular energy.”

Together with those themes, also not surprisingly, Santini declares any dressage comprising “exercises based on avowedly artificial balance” as irrelevant, indeed antithetical, to “a system” — forward riding — “devised solely for cross-country purposes.” Adamant on that purpose, Santini regards “any training not directly and continuously aimed at open air activities of some kind not only useless but deleterious to both horse and rider,” and so cautions instructors that there is “not much sense … in imparting even the most elementary instruction under any roof but that of the sky.”

Santini makes an excellent read. He is instructive and engaging, smart and sensible, and he has wit (he disparages grooms who “shorten cheek pieces until the poor animal’s facial expression is one of grinning idiocy,” and advises course designers that a ditch should not “resemble the handiwork of grave diggers”). He also cares about young riders. For many reasons, he argues, children under ten should not show, but rather should ride ponies (“or even a donkey”) bareback in fields: “A few slight falls, and corresponding bruises, under these conditions, not only will fail to affect the nerve of an ordinary child no matter how young, but if he is at all ‘game’ make him all the keener.” Cue the collective gasp of helicopter parents!

The publisher of Xenophon Press, Richard Williams, makes a good case on pedagogical grounds for re-issuing Learning to Ride — “to preserve Santini’s knowledge in an accessible format for contemporary riders.” To the extent that Xenophon’s catalog is instructional, the choice makes perfect sense; to the extent that its catalog is historical, Riding Reflections or The Forward Impulse might have been more apt. Happily, Xenophon lists the former of this pair as forthcoming.