A prestigious British horse journal has released a collection of equine dentistry research articles to support continuing advancements in the field.

The collection of 10 articles in the Equine Veterinary Journal has been co-edited by Paddy Dixon and Vicki Nicholls.

The collection is available online to all readers and coincides with the appointment of Nicholls as president of the British Equine Veterinary Association, which owns the journal.

Nicholls said advances in equine dentistry continued to gather pace, and she had worked with Dixon to collate the most current dental research that would be relevant to equine practitioners with any level of expertise.

The studies cover physiology, disease, diagnosis and treatment techniques in equine dentistry, and are said to cover some of the most important current research in Britain.

One of the studies, a comparative analyses of tooth wear in free-ranging and captive wild equids, found that captive animals experienced less abrasion-dominated tooth wear and suggested that factors leading to focal overgrowth (“hook”) formation, in particular feeding height, should receive special attention.

A long-term study of equine paranasal sinus disease found that ancillary diagnostic techniques, such as nasal endoscopy, sinoscopy and skull radiography, enabled identification of the specific sinus compartments that were most commonly affected.

Local anaesthesia is often needed for invasive procedures while the equine dental patient is under standing sedation. An intra-oral approach can be used effectively to desensitise the inferior alveolar nerve with minimal complications, suggested another of the studies.

Two studies explored the relevance of Computed Tomography (CT) for accurate diagnosis of tooth root infection in maxillary and mandibular cheek teeth. They concluded that CT was useful for identifying deposition and defects of mineralised material but of less use for identifying inflammation and tissue destruction. Overall, it was found to be helpful in diagnosing such infections. 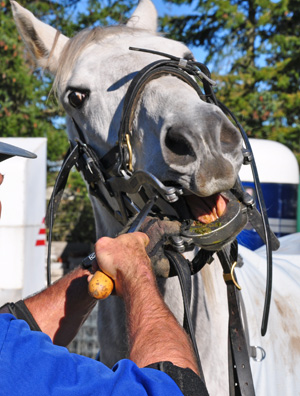 The functional orthodontic correction of overjet or overbite in foals was considered effective in a study that used the technique with minimal complications. It was noted that often more than one implant was required and that the treatment should be started as early as possible.

A long-term study on the clinical effects of the mechanical widening of cheek teeth diastemata for the treatment of periodontitis concluded that it was an effective treatment for severely affected horses but it was potentially invasive and may require repeated treatments.

There were several causes of chronic unilateral nasal discharge and one of the studies explained why a recently described disease of the nasal conchal bullae could be a culprit.

Equine odontoclastic tooth resorption and hypercementosis is an infrequent and under-diagnosed form of severe dental disease of older equids. All teeth, and particularly the incisors, should be examined for signs of gingivitis and hypercementosis, suggested one of the studies. Subsequently they should be radiographed for early diagnosis and management.

“To this end a strong working knowledge of equine dentistry should be seen as an essential cornerstone for every equine practitioner.

“This diverse collection has the convenience of being easily accessible, online and in one place to help keep vets fully abreast of the excellent research currently being conducted in the UK.”

The collection of articles can be found here.