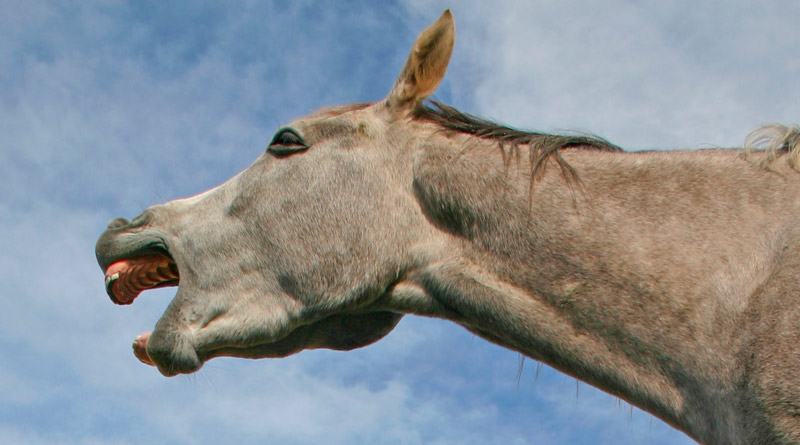 What makes a horse yawn?

People tend to link their own yawning to tiredness or boredom, but researchers place a more technical interpretation on it. They link it to changes in the arousal state, stretching, thermoregulation, brain cooling, stress, and even the expression of social status.

But do a similar set of drivers spark yawning in horses?

Yawning is actually rare in herbivores, and little is known about it compared to humans, primates and carnivores.

A team of researchers in Europe set out to learn more about yawning in both domestic and Przewalski horses by observing them living in semi-natural conditions.

Aleksandra Górecka-Bruzda and her colleagues, writing in The Science of Nature, noted that horses provided the chance to compare not only animals living in different conditions, but also wild versus domestic species.

The study involved observations of 19 Przewalski horses kept in a 280-hectare enclosure in France. They lived with minimal human interference. The study team re-analysed data gathered from a 2007 study for their research.

To that they added their own monitoring of 16 domestic horses of different breeds living outdoor in groups.

The researchers found no difference in yawning frequency between the Przewalski horses and domestic horses.

The Przewalski horses, they noted, showed much higher levels of social interaction than domestic horses.

They found a positive correlation between yawning frequency and aggressive behaviours in the Przewalski horses, especially males, supporting the idea that yawning may be associated with more excitatory/stressful social situations.

The study team also found a correlation between yawning frequency and affiliative behaviours in domestic horses. Affiliative behaviours are intended to build or support an individual’s union with others. In horses, these include the likes of moving closer to another horse with ears forward and mutual grooming. This finding supported the potential relationship between yawning and social context.

Finally, stallions, but not geldings, showed much higher levels of yawning than females in both species, indicating that the intensity of interactions may be important in triggering yawning. Yawning, they suggested, could therefore be a displacement activity that helped reduce tension.

The researchers found that adult males yawned more than females and immature males.

The findings showed that, in natural conditions, yawning was rather rare in mares and geldings, with 0.07 occurrences per hour, whether wild or domestic.

However, these horses lived in drastically different circumstances, the study team noted. They were observed in riding centres, where they lived in single stalls under social, spatial and feeding conditions known to elicit chronic stress.

The researchers found that the frequency of social interactions was higher in Przewalski horses, especially in bachelors, which may explain why the clear relationship between aggression and yawning frequency was found only in male Przewalski horses.

“However, the correlation found between yawning frequency and affiliative social interactions in the domestic horses indicates that yawning may, to some extent, relate to social (probably excitatory) contexts.”

The study team said further studies were needed to look more precisely at which aspects of the social interactions may be involved and whether the structure of yawning may change accordingly.

It was clear, they said that domestication had not influenced the prevalence of yawning.

“We found no correlation between yawning frequency and aggressive or defensive interaction frequencies in domestic horses, which may simply be due to the very low frequency of agonistic behaviours observed in these conditions,” they said.

“Since there were less adult males in domestic horse groups than in Przewalski horse groups, it might be possible that the small number of conflicts observed have hampered the association between yawning frequency and agonistic behaviour in domestic horses being revealed.

“There was, however, a positive correlation between yawning frequency and affiliative behaviour in domestic horses.

“It would be interesting to examine more precisely which positive interactions were most involved with yawning and what followed in terms of social issue.”

They continued: “Here, it was remarkable that despite the species difference, but also the differences in group composition, the same overall frequency of yawning appeared to be higher for adult intact males than for females or immature horses in all cases.”

They concluded: “According to existing works, yawning may be triggered by different factors like a higher level of testosterone and, simultaneously or independently, by social stress caused by agonistic interactions, mainly between males.

In the present study on horses living in favourable environments close to natural settings, it seemed that testosterone may be a major factor, while social excitation, rather than social stress, appeared as a secondary potential factor causing a higher frequency of yawning in males, because they yawned also when not involved in social conflicts.

“Increased occurrence of yawning in domestic situations could thus attract the attention of caretakers to make the alterations to improve the welfare of their horses.”

They said that while the precise relationship between the causes, contexts and functionality of yawning remained to be explained, their study contributed to the general knowledge on this subject in herbivores.