Whether it’s heels up in Europe to keep the good luck in, or heels down in Asia to stop the bad luck dropping in, the horseshoe is a universal sign of good luck. And the hardest working shoe fitters at the Rio Olympic Games are the team of British and Brazilian farriers working around the clock to keep the well-heeled equine athletes well-shod at the Olympic Equestrian Centre in Deodoro.

Benson is a second-generation farrier, who will take over as lead farrier for next month’s Paralympics. He and Blurton worked at the London 2012 Games, along with forge general manager Emma Cornish, 41.

Just like their human counterparts, the equine athletes have the choice of hand-made shoes and off-the-shelf versions, but the Olympic horses in Rio have bespoke shoes to help them perform at the very highest level. 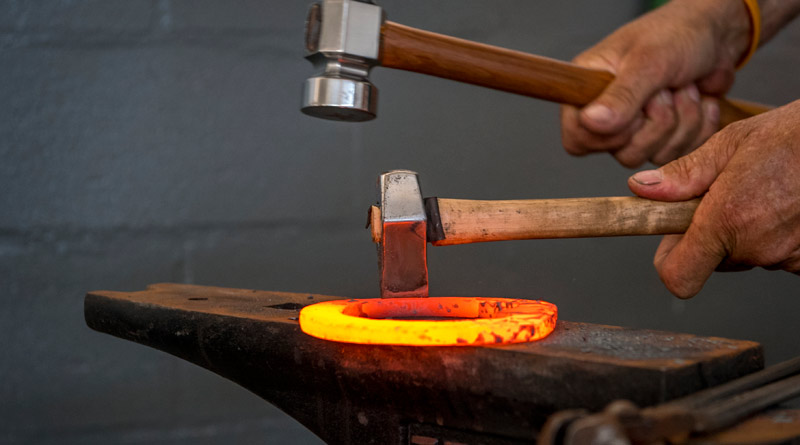 “The major players come with their own farriers,” Blurton says. “All the Olympic horses come with a spare set of pre-fitted shoes so that if they lose one the team can produce a shoe that already fits. In London 2012 we had a horse that lost a shoe in the warm-up 10 minutes before it was due to jump. We had the shoe back on in seven minutes, that’s the equivalent of a 3.5 second pitstop!”

These are shoes with a variety of styles: flat shoes, tapered shoes, heart-bar shoes that encase the entire foot, and shoes with studs for grip. And some even come with gel pads for cushioned comfort. 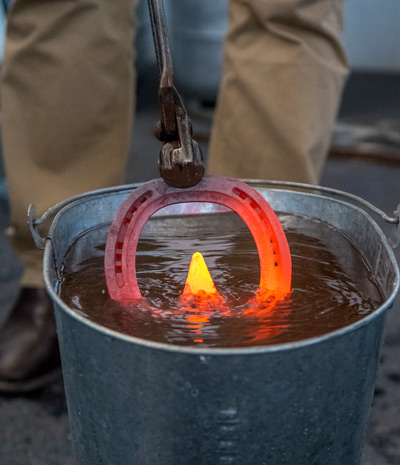 Just like track and field athletes or footballers, when grip is crucial, studded shoes are the only answer. And for horses, there’s a huge variety of different lengths and shapes of studs for different ground conditions. According to Blurton, “stud selection is nearly as important as tyre selection for Formula 1”.

To achieve the ultimate equine fit, the shoe is heated to a red-hot 800 degrees before being forged on the anvil to the correct shape. When the temperature of the shoe has dropped, it’s pressed onto the foot and, once the fit is optimal, the shoe is quenched in a bucket of water to cool it down. Then it’s nailed onto the insensitive hoof, the equivalent of a 10mm thick toenail. A pedicure and shoe-fitting in one package!

There’s also a glue-on aluminium option, using a special glue that sets in two minutes. This requires fast, accurate work and is a really specialised job. One of the horses that was re-shod by the Olympic farriery team using this method went on to win gold.

And then there are apparently decorative effects that actually play an important role, like copper-coated anti-microbial nails which tackle the equine equivalent of athlete’s foot.

The Rio 2016 forge was designed and equipped by Farrier Services Coordination Luiz Tenorio, 44, a first-generation farrier born in Rio de Janeiro. He’s responsible for making sure that wherever there’s a horse there’s a farrier ready to step in if a shoe needs to be replaced, even moments before they’re due onto the field of play.

Tenorio has also hand-selected the Brazilian team that includes 13 volunteer farriers. As part of the Games’ legacy programme, each day’s schedule includes lectures and one-on-one training sessions, allowing the less-experienced Brazilian farriers to add to their knowledge bank, particularly about remedial shoeing.

This is a major legacy for Brazil, but there’s also a global legacy, as the national team farriers and the Rio 2016 team meet up in the forge most days to discuss changes within the industry. As the sport evolves, horse-breeding is also evolving to produce more athletic horses, which in turn puts more demands on their shoes and on the farriers, so this meeting of minds involves knowledge-exchange at the highest level.

Farriery is an incredibly physical job dealing with an animal weighing between 500 and 600 kilograms and with a mind of its own. So what about gender equality in an industry servicing a sport which, uniquely in the Olympic movement, sees male and female athletes competing for the same medals? There are females working as farriers, although not as many as their male counterparts, and what they may lack in physical strength they make up for in agility and ability to get on with temperamental horses.

And what about injuries? “I’ve had three broken legs and I’ve broken my back, but none of those were from shoeing horses,” Jim Blurton says.

“Broken toes are part of the job, and you get backache from the very first day you start shoeing horses. You’re constantly bent over, but you adapt and you get extremely strong back and arm muscles! But there’s incredible job satisfaction. I see farriers as legal equine performance enhancers.”