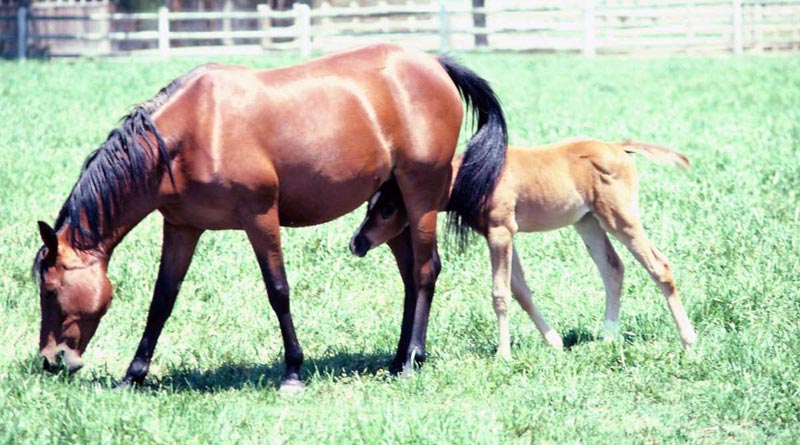 Horse owners with a mare who can’t carry a foal to term need not give up on the idea of getting a foal from her.

One solution is embryo transfer (ET). The process involves taking a fertilised egg from the desired mare and implanting it into another healthy mare’s uterus to carry to full term.

ET is also an option for owners who would like a foal, but want to keep their mares in competition.

Depending on a horse’s registry, it is also a way that valuable mares can produce more than one foal a year.

“It can be used as an infertility treatment, or for mares with severe lameness, metabolic disorders, or other health disorders for which pregnancy may be too risky. But most people use ET for performance horses, such as show, polo, dressage, or jumping horses. It is widely used in Argentina and throughout South America.”

While the technique may be routine, it is quite involved. “It is a case-by-case situation. The key to success is getting a healthy embryo, and finding a healthy and reproductively sound recipient mare that can carry the embryo and is ovulating at the same time as the donor mare,” says Dr Tibary, who has performed ETs in horses since 1985.

The process begins like any other pregnancy. First, the donor mare should have a breeding soundness evaluation to assess her ability to ovulate and produce a fertilised embryo.

Then she should be monitored during the cycle and bred close to ovulation to increases the odds of pregnancy and getting a viable embryo.

“The chance of getting an embryo in the first place can be difficult depending on the age and reproductive health of the donor, and on the semen quality and fertility of the stallion used,” Dr Tibary says.

“In older mares or those that have reproductive problems, the odds of getting an embryo in a particular cycle may be well below 40%.

“In younger mares with no reproductive problems, there is a 70% to 80% chance of getting an embryo. To boost those odds, it is imperative to use high-quality semen from a highly fertile stallion, in addition to close ultrasonographic monitoring of the mare in the immediate pre and post-insemination period and ovulation to address any problems that may arise.”

They should also have breeding soundness evaluations to make sure the recipients are healthy enough to carry the foal to term. The goal is to find a recipient that is ovulating the same day or one or two days after the donor.

To help this happen, veterinarians can treat the mares with hormones to synchronise their ovulation. Another option is to use a hormonally prepared ovariectomised mare.

Seven days after ovulation has occurred in the donor, the embryo is flushed out through a Foley catheter inserted through the cervix, using a special protective solution. In most cases, the fresh embryo is transferred directly to the recipient mare with a conventional non-surgical technique similar to insemination.

“In some cases, you can freeze the embryo until you find a recipient, but the embryo might not survive that type of manipulation and the pregnancy rate drops dramatically unless a specific technique and stage of embryo is used,” he says. “If the embryo is transferred fresh, the chance of success is a lot better. Embryos can also be cooled and shipped to another state where a recipient is located, but the pregnancy rate drops some.”

With all these factors, ET can be an expensive and frustrating proposition.

Beyond the ET procedure itself, other costs often include breeding soundness evaluations, hospital boarding fees, hormonal treatments to induce ovulation, semen or stud fees, and the management of mares post-breeding.

“The ET case load at WSU is relatively small,” says Dr Tibary, who has practiced reproductive medicine in the United States and abroad, and managed some of the largest stud farms in Morocco and Abu Dhabi before joining the faculty at the university in 1998.

“There is a lot of research that can be done to further develop ET associated techniques. One is gamete transfer, which is only available at three or four labs in North America,” he says.

Article first published on Horsetalk.co.nz in 2009.