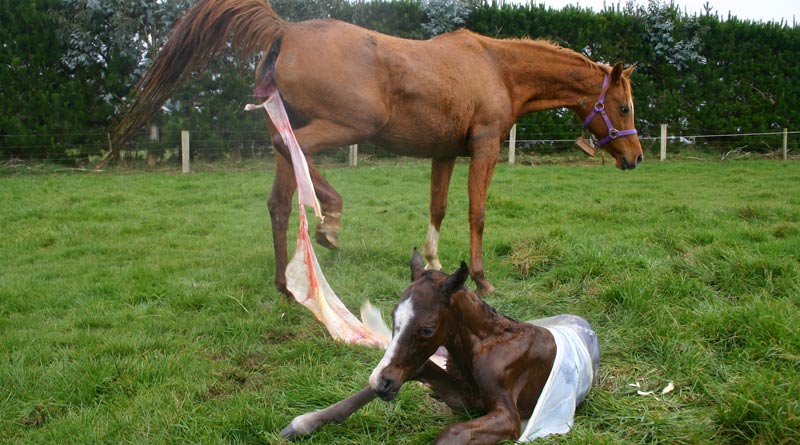 Retention of the fetal membranes (placenta) is a common post-foaling complication. It is of particular concern in heavy draft breeds, which seem especially likely to develop laminitis if expulsion of the membranes is delayed.

Retention of the placenta for more than an hour has been associated with reduced pregnancy rates.

So what can be done to encourage the separation and expulsion of the placenta? A Japanese study, in a small group of horses, found that hourly injections of oxytocin after foaling was an effective way of inducing placental expulsion. The work was reported in the Journal of Veterinary Medicine and Science.

The scientists gave 50iu of oxytocin by intramuscular injection at hourly intervals. They measured the plasma concentrations of oxytocin and prostaglandin F2 alpha metabolite (PGFM), and kept a record of when the mare was hand milked, and when the foal stood up and suckled.

Suckling (and hand milking) tended to produce an increase in the oxytocin concentration in the blood.

All four mares expelled the placenta after between 1 and 3 injections.

Although expulsion was delayed in this case, the clinicians felt that the oxytocin treatment had been effective and questioned whether expulsion would have occurred more quickly had the injections started earlier after foaling.

Another mare retained the placenta until just after four hours post-foaling. She showed a decline in oxytocin and PGFM followed by a gradual rise in oxytocin, a pattern similar to the two mares that cleansed more promptly.

The clinicians could not explain why the placenta was retained in this case. It was finally expelled when oxytocin levels reached much higher levels than in the other mares. This was preceded by a peak in PGFM that coincided with signs of colic. The abdominal discomfort resolved quickly without the need for treatment.

The authors suggest that intramuscular injections of oxytocin at hourly intervals after foaling is effective for producing placental expulsion.

“I recommend that for heavy draft mares, 50iu of oxytocin should be administered from one hour after foaling and continued at one hour intervals until expulsion of the placenta,” Dr Ishii said.

“We usually don’t remove the placenta manually until 8 hours after foaling.”

This article, courtesy of Equine Disease Quarterly, was first published on Horsetalk.co.nz in December, 2009.