Get a bottle of water. Hold it between your fingers suspended under your hand above the ground. Extend your arm horizontally, or slightly above the horizontal like the neck of a horse. Lower your arm, as does a horse lowering the neck; according to the “long and low” theories, the muscle of your arm should stretch. 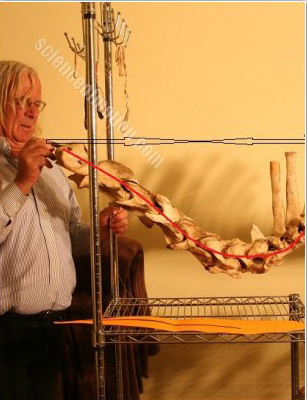 However, Xenophon wrote: “There are two neck postures, long for work and high for parade.”

There is effectively a neck posture, long but not low, that is helping the horse to an upward force in the thoracic vertebrae when the back is properly working and coordinated. The neck posture is proper for each horse, as it is influenced by many factors, length and orientation of the neck, weight of the head, power of the forelegs extrinsic muscles, etc. The phenomenon is a law of physics that has nothing to do with stretching and relaxation.

Interactions of forces are difficult to explain so we process the information with progressive diagrams. On this first diagram, my hand is pulling the cervical column down, illustrating the weight of the head pulled down to earth by gravity. The two thin arrows facing each other represent the resistance of the nuchal ligament. The red line through the cervical vertebrae illustrate the force induced on the cervical vertebrae from the attraction of gravity pulling the head down and the resistance of the nuchal ligament. 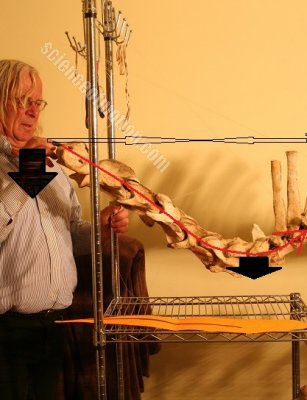 Without support under the junction between thoracic and cervical vertebrae, the weight of the head and neck pulled down by the attraction of gravity pulls the base of the neck down, increasing the load on the forelegs. 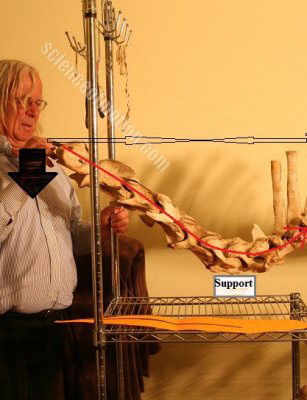 The support illustrated on this diagram is the resistance of the forelegs’ extrinsic muscles which are supporting the trunk between the forelegs.

Now we add the upper neck muscles. The weight of the head is pulled down by the attraction of gravity, (black arrow, G). The nuchal ligament and the upper neck muscles resist the downward motion of the head. The load is acting on the cervical column in the direction illustrated by the red dotted arrows, inducing an upward force on the thoracic vertebrae. The condition is the strong support of the extrinsic forelegs muscles supporting the trunk between the forelegs (black up arrow, illustrating the work of the forelegs extrinsic muscles).

Without the work of the muscles supporting the trunk between the forelegs, the weight of the head and neck would simply load the forelegs. The same loading occurs when the neck is lowered below the point that is proper for the horse.

On a manipulation designed to show the work of the nuchal ligament, we placed the thoracolumbar column on a table. We have removed all the muscles as well as the ribs and the sternum but we kept the nuchal and supraspinous ligament. As we pull the cervical column downward, mimicking gravity pulling the head down, the table supports the base of the neck as do the forelegs’ extrinsic muscles. The nuchal ligament, which is elastic, elongates to resist the pulling down of the cervical vertebrae. It is easy to understand that without the support of the table and therefore the forelegs’ extrinsic muscles, the pulling down of the cervical column would sag the trunk downward between the shoulder blades, further loading the front limbs.

In line with the findings of Jean Marie Denoix, the downward force that we exerted on the upper end of the cervical column mimicking the weight of the head pulled down by gravity, induced an upward force on the thoracic vertebrae through the cervical column. Due to the upward direction of the neck and the firm support of the lower neck provided by the table, the law of physics occurred earlier on this specimen than it would on a horse with a longer direction of the neck. Also in line with previous findings, there was greater tension of the supraspinous ligament when the nuchal ligament was under strain.

Albert Einstein wrote, “An experiment is something everybody believes, except the person who made it.”

The specimen that we used in our experiment had an unusual upward shape of the neck. The cervical column was almost vertical. Since our aim was demonstrating the work of the nuchal ligament, we feel that the specimen would clearly show the elastic strain induced on the nuchal ligament when the neck was lowered. The upward direction of the cervical vertebrae would also emphasise that the strain on the nuchal ligament occurs earlier on a horse with a neck oriented upward by comparison to a horse with a neck oriented in a longer direction. As we pulled down quite strongly on the cervical column, the middle of the thoracic spine lifted up from the table.

We could have used this picture to “prove” that the lowering of the neck lifts the back but it would have been a misinformation like the ones that are commonly used to accredit long and low theories, stretching and lifting the back theories.

Due to the unusual upward shape of the cervical column, we had to pull very hard to have the cervical column approaching a horizontal posture. The seventh cervical and first thoracic vertebrae that were supported by the table, jerked and shifted backward. The shift created the lift of the middle of the thoracic spine. This may happen on a table in the specific contest of an experiment; a table, just the vertebrae and ligaments, no ribs, no sternum, no internal organs. This is unlikely to happen on a living horse in motion. We asked one of the technicians holding the specimen to press down on the thoracic vertebrae. He did not have to exert any strong pressure; just placing his hand brought back the thoracic vertebrae on its original alignment. Had they been present, the weight of the ribs and the sternum and the internal organs would have canceled the lifting effect.

The pathologist running the experiment pointed out how easy it is to misuse events occurring during an experiments when the agenda is about accrediting preconceived opinions.

There were four technicians holding the specimen on the table. The ones situated on the middle of the thoracic spine felt increased tension of the supraspinous ligament when we pulled the cervical column downward. The one holding the pelvic did not. He could manually tilt the pelvis and sacrum unit. This is not surprising since the supraspinous ligament does not cover the lumbosacral junction.

The supraspinous ligament bridges over the dorsal spines of the thoracolumbar column. The ligament is quite strong as it is part of the thoracolumbar spine stabilization mechanism. One of its main functions is limiting the rotations of the vertebrae. The supraspinous gradually disappears after L2, dividing itself into thinner fibers. A comparison can be made with a thick electric cable that we peel; the inside is composed of several thinner wires. The supraspinous ligament gradually disappears over the last lumbar vertebrae and is non-existent over the lumbosacral junction.

The dynamic benefit of a longer neck posture is related to the natural orientation of the neck and the power of the forelegs’ extrinsic muscles. It is basically long but not low and is proper for each horse. When the neck is lowered below the horse’s efficient neck posture, the dynamic effect is no longer beneficial and the load increases on the forelegs. We have found when jogging horses at their natural cadence, they adopted naturally the efficient neck posture. But horses that have been trained to work with a low neck posture have a harder time exploring the proper neck holding as their mind and their body have been trained into a low neck position.

While the two extremes, high and low neck posture,s have serious inconveniences, the middle ground is advantageous.

The nuchal ligament is not under tension when the neck is held in an FEI dressage frame as well as classical illustrations. The neck is then fully supported by the work of the upper neck muscles. While it is understandable that a higher neck posture reduces the load on the forelegs, the benefit of the nuchal ligaments should be considered.

A not-so-high neck posture, allowing the work of the nuchal ligament, offers more advantages. The nuchal ligament lessens the work of the upper neck muscles by up to 55% at the walk and between 32 and 36% at the trot and canter. A slightly longer neck position does not increase the load on the forelegs and benefits from the tension of the nuchal ligament. We have explored the concept, developing the power and strength of the extrinsic muscles from our horses’ forelegs. As you can see on every the pictures, our horses sustain a high level of balance on a very loose rein and a slightly lower and longer neck posture.