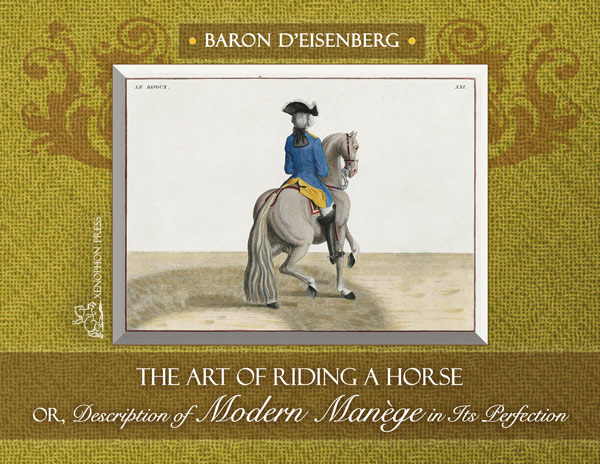 Friedrich Wilhelm Baron Reis d’Eisenberg: The Art of Riding a Horse, or Description of Modern Manège in Its Perfection. 1727. 154pp. Rpt. Xenophon, 2015. Also available from Amazon.

Recent offerings from Xenophon Press include a pair of books, one historical and one current, related to Austrian dressage and equitation: Baron d’Eisenberg’s Art of Riding a Horse, first published in London in 1727, in French, as Description du Manège Moderne dans sa perfection; and Werner Poscharnigg’s Austrian Art of Riding, a survey of equestrian principles and practices as they evolved in Austria over the past five centuries. One is a gem, and the other its well-made setting.

Elegant in conception and execution, d’Eisenberg’s Modern Manège offers 48 lessons in “how to train a horse properly to perfection in Manège,” in the words of Sherilyn Allen, the book’s translator. Each lesson comprises a page of text and a facing illustration, the former written by d’Eisenberg and the latter drawn by him (and engraved by Bernard Picart). D’Eisenberg intended to reach “Connoisseurs” and “Apprentices” alike by addressing with only “a minimum of words the essentials of the necessary lessons,” and by focusing instead on “giving [the reader’s] eyes a chance to see the correctness of these Manège horses in their actual situations.”

D’Eisenberg, in short, wanted to show, not tell. Other horsemen, in his opinion, already had explained dressage both brilliantly and thoroughly — notably, William Cavendish, 1st Duke of Newcastle, and Johann Christoph von Reganthal, Imperial Chief Rider to the Austrian Court, “one of the greatest Masters of our Century,” and d’Eisenberg’s teacher. D’Eisenberg, for his part, would represent their principles and his own with brevity and beauty: “The rider in the illustration represents Monsieur de Reganthal mounted, where I tried more to depict the effect of his seat, than the likeness of his person.” D’Eisenberg’s pellucid prose bristles with insight, and his illustrations, to invoke the Horacian formula, both delight and instruct.

Modern Manège opens with seven descriptions and illustrations of equine types (Spanish, Barb, Neapolitan, and so on) “according to their size, disposition, and different aptitudes,” and the training methods therefore most appropriate to each. Forty-eight highly systematic lessons follow, with d’Eisenberg’s caution that “the Art of Riding a Horse demands that one lesson follows another precisely.” The lessons advance through the basic gaits, passage (half-pass) and other suppling exercises, airs on the ground, and, finally, airs above the ground (“the trot is the foundation of the Manège work,” d’Eisenberg writes, “everything emanates from it”). Each lesson is offered both with the bridle alone and with “the incomparable effects of the cavesson.” The volume concludes with seven bit types and their recommended applications.

Four motifs recur throughout the lessons. One, horses possess natural aptitudes that the trainer must identify, accommodate, and enhance. Nature gives “jumpers” the “disposition” for airs above the ground, for example, while trainers “give them time.” Two, horses do not respond to harsh or impatient training, but demand and deserve “reason and patience,” or “softness and discretion and light aids,” or “kindness and caresses.” Three, airs are beautiful — the capriole, for example, is “the most beautiful, but also the most difficult of all the airs above the ground” — but horses capable of airs are “very rare.” Four, “the picture of the horse when ridden,” in Allen’s words, “should not be marred by an ungraceful rider.” D’Eisenberg finds nothing “uglier” than a rider “who lets himself move back and forth” or “who [holds] on with the calves of his legs.”

D’Eisenberg introduces a perhaps even more important theme in his dedicatory letter to George II—that “the Art of creating riders and horses according to the rules of the Manège is … an indispensable necessity for war.” (D’Eisenberg regards pirouettes, for example, as “useful in single combat for ‘winning the croup’ [getting the advantage] on the enemy.”) Though writers from Grisone onward all subscribed to this fundamental principle, Allen cautions that “horse trainers of the time” often “paralle[led] the training of show horses to that of war horses” to persuade “their royal sponsors” that schooled horses served “both pomp and war”—a tactic, of course, that also puffed and preserved their positions as royal trainers. 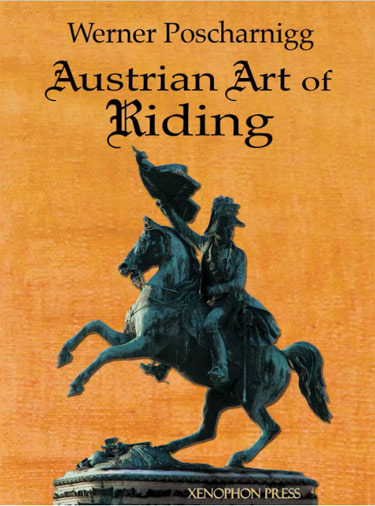 Werner Poscharnigg’s Austrian Art of Riding seeks to identify “the essence of Austrian equitation” as it evolved over five centuries. Through studies of noted equestrians in multiple contexts, Porcharnigg argues that a Spanish-Neapolitan tradition originating in the 16th century metamorphosed into an Austrian tradition that established itself in the 17th century, achieved its classical moment in the 18th century, saved dressage from decadence in the 19th century, and entered modernity in the 20th century — an evolution driven, in large part, by ongoing innovations in military technology that demanded ongoing modifications to cavalry training and tactics.

Poscharnigg has a steady hold on the historical contexts and philosophical underpinnings of the Austrian equestrian “essence” and tradition. Proposing that the mid-17th through late-18th centuries marked the “zenith of a specifically European culture,” with equestrian learning and skill an accepted and expected standard of education for nobility, he then shows how “military and cultural tendencies in 18th century Europe,” culminating in the French Revolution of 1789, led to a general demise of High School throughout Europe save in Austria, where a “synthesis of martial equitation and High School became the hallmark of Austrian equestrian art well into the 20th century.”

Poscharnigg’s tally of the essential features of the Austrian art of riding begins with Sigmund von Josipovich’s identification of “the horse’s swinging, elastic gait and the rider’s pliant, elegant seat in harmony with it.” Poscharnigg adds “the thinking rider, the largely humane treatment of the horse, the emphasis on effortless riding, even for the cavalryman” — features that translate, in technique, to “a light hand,” or “the cessation of the aids once they work, the descente de main.” While he accords d’Eisenberg due respect, he regards Reganthal as the seminal figure (with Adam von Weyrother and Leopold von Edelsheim-Gyulai sharing the honor): he traces to Reganthal, for example, both the concept of the “thinking rider” and the inauguration of “a new era of effective and humane handling of the horse.”

Specific features aside, Poscharnigg finds the true “essence” of Austrian equitation in its being inherently and integrally martial — the overriding theme of his book. After some two centuries, European equitation, particularly in pre-Revolutionary France, had diverged from warfare to the point where “a hyper-refined equitation … alienated itself more and more from the battleground” and became “art for art’s sake.” The post-Revolutionary French military, as a result, rejected school equitation as “anti-republican.” The High School in Vienna, meanwhile, “passed on its scientific principles to the military, a rapprochement that “preserved the High School from artifice,” atrophy, and extinction. It also led to a long-term and mutually beneficial reciprocity of school, campaign, and terrain riding whose apotheosis was Edelsheim’s Exercise Manual for the Imperial and Royal Cavalry, “a monument of superior equestrian culture.”

Poscharnigg’s fine study does have two flaws. First, it lacks sharp focus, an effect of its ambitious goals. Foreground and background often shift unclearly between external forces on a tradition (such as technology) and internal forces (such as influence), as well as between an “essence” and its mutability over time. Second, the book lacks clear definition of its key term. “Art” seems sometimes to mean a craft or its methods (the art of war or the art of politics) and sometimes to mean an activity or object with aesthetic quality or purpose. When using the term in its second sense, moreover, Poscharnigg elides the distinction between an aesthetic but utilitarian activity like equitation and a purely aesthetic activity like dance, leading him to mistaken notions about the relation of equitation to “art for art’s sake” or to avant-garde art.

Modern Manège and Austrian Art of Riding differ in period, content and form, and objective. They also differ as physical objects. A scaled down adaptation of the first edition, Modern Manège boasts nice proportions, clean layout, and good quality reproductions of the original engravings — a well-made book at a good price. Though more workmanlike, as befitting its goals, Austrian Art of Riding nonetheless shows very well with its large format, friendly layout, and copious and well-chosen illustrations. Together, the two books make an instructive and attractive pair for students of dressage and equitation.

One thought on “The Austrian Connection”