Retiring American Horse Council president Jay Hickey has received the organisation’s Rolapp Award, which is usually presented to a member of Congress who has been a great supporter of the horse industry.

The award is presented in honor of the late Rich Rolapp, the president of the AHC from 1974 to 1993. 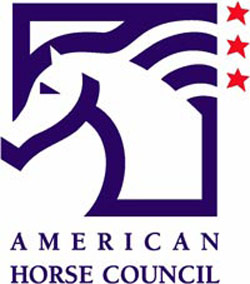 However, this year the AHC Board of Trustees elected to give the 2016 Rolapp Award to retiring AHC president, Jay Hickey at a Congressional reception on June 14.

“Jay Hickey has been a true champion of the horse industry and is most deserving of this prestigious honor,” said Dr. Jerry Black, Chairman of the AHC Board of Trustees.

“He closely observed every issue that could have had an impact on the American Horse Council’s members and provided everyone with astute guidance for the past 23 years. It was wonderful to see Jay receive an award that held so much personal and professional meaning for him. He has been a trusted colleague and good friend to countless people in the horse industry.”

During Hickey’s time as president, the AHC has been involved in the passage or defeat of every federal law and regulation that has, or could have, affected the horse industry.  This includes all legislation or regulations that dealt with taxes, gaming, breeding, racing, showing, health and welfare, and recreation.

“It is a great honor to receive this award, knowing and respecting Rich as I do.  He brought me to the AHC and mentored me through my early in the horse industry.  Having his sons Todd and Brian here in Washington, DC for the ceremony meant a great deal to my family and me,” Hickey said.

Under Hickey’s direction at the AHC, new committees were formed to represent specific segments of the horse industry. The AHC also coordinated two national economic impact studies and was a driving force behind the formation of the Congressional Horse Caucus, the Congressional Cavalry, the Unwanted Horse Coalition, and the AHC’s marketing alliance, known as Time to Ride.

“But it was his involvement day-in-and day out on Capitol Hill and with the regulatory agencies, on big issues and small, for which AHC members and the industry are most appreciative,” Black said.  “You knew that Jay cared about the industry.”

Todd Rolapp said the family was thrilled Hickey had received the award named after their father.

“His support of the horse industry through his impressive tenure at the Horse Council has been remarkable. The friendship that he developed with our father and with our family during that tenure is priceless. We wish him all the best in his well-earned retirement and are greatly appreciative of the Horse Council’s decision to honor him with this award.”