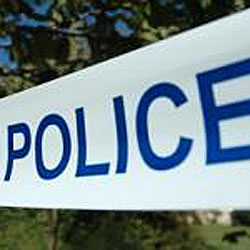 A British horse is recovering after being shot with an arrow that only just missed his left eye.

Police in Hertfordshire are investigating the attack on the skewbald cob yearling named Widget.

Widget was shot in his field off Bedmond Road, Abbots Langley. He was found injured around 7pm on Saturday, with the arrow still protruding from his head.

Widget was taken to the Royal Veterinary College for urgently required treatment. He is expected to survive his injuries and retain at least some sight in the eye.

Detective Sergeant Dan Stoddart appealed for anyone who saw any activity around the field to come forward.

“This appears to be a senseless, cruel crime and we are doing all we can to find the person responsible. If you saw anyone acting suspiciously around the field yesterday we would like to hear from you as soon as possible.”

The arrow missed Widget’s eye by a whisker. It entered through the side of his eye socket and pierced his nasal cavity, but did not strike anything vital.

Widget is expected to remain in the care of the veterinary college for a week as he begins his recovery.

He appears to be coping well with the trauma, and is said to be bright and alert.