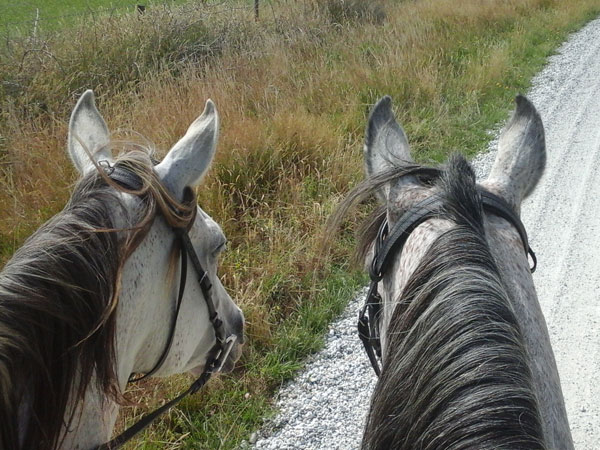 We can willingly believe in theories but the reality is there are systems within systems within systems that have to be carefully orchestrated. We can believe in straightening a horse between a whip and the wall, we can claim success having the horse travelling with the shoulders in front of the haunches but between the shoulder and the haunches a crooked thoracoumbar spine induces discomfort, poor performance and limbs kinematics abnormalities, predisposing the horse to lameness.

In the late 1950s, the biologist Pennyquick observed that animals migrating long distances in Africa maintained a consistent speed within each gait. He studied the phenomenon from the perspective of oxygen consumption and found that it was a speed for each gait where animals covered a longer distance for a given oxygen intake. It was at this time regarded as an interesting observation.

Later, the phenomenon was studied at the level of muscular energy, demonstrating that less energy was needed at a given cadence. The concept of the natural frequency or cadence has since evolved from a curiosity to a fundamental principle of locomotion down to the relation between contractile cells and tendinous materials within the muscles belly.

“Because the muscle is composed of both muscle fibers and tendinous materials, all of these structures must be collectively ‘tuned’ to the spring properties for the muscle-tendon system to store and recover elastic energy during locomotion.” (LaStayo et al)

Each horse does have its own frequency. The natural cadence of one horse can be faster than another horse.

It is this observation that make me decide to remove Quolibet from the school horse program.

I observed this school horse giving a hard time to every student, walking on the heels of the previous horse during group lessons or put in circles to control his speed. The horse was sick and scheduled to be “reformed” and therefore put to sleep, with the next group of reform. It was the way the military system worked.

I was impressed by his courage, thinking that this poor horse was on death row and he was giving hard time to everybody and himself simply because his natural cadence was faster that the average horses. I took him in my personal group of horses simply to ease the last months of his life.

It turned out that he had been misdiagnosed and he performed very well as a three-day eventer, all the way to the World Championship of Punchestown in 1971.

If the filaments of the titin – a protein that functions as a molecular spring which is responsible for the passive elasticity of muscle – is functioning as a locomotor spring, it has to be “tuned” to the frequency of the muscle use.

LaStayo and his team verified the hypothesis by studying titin isoforms – different forms of the titin protein – and its expression in muscles that are used cyclically at different frequencies.

The hypothesis has been recently supported by studies demonstrating that titin isoform is an adaptable property of striated muscles. Experiment on humans demonstrated that the muscular work was double when the athlete was asked to perform slower that his natural frequency. At the other end of the spectrum, when the cadence is faster than the athlete’s natural frequency, the benefits of the stretch-shorten contractions are lost. There is truly one cadence per human as well as per horse where the metabolism functions at its greatest efficacy.

I have used a slower cadence for therapeutic purpose as well as specific muscular work. This is very effective but has to be done with great cautiousness. The approach can be beneficial only when the horse is properly using the muscular system of his back. The coordination between limb movements and longitudinal flexion, lateral bending and transversal rotation of the thoracolumbar spine have to be very well established as further slowing the work will increase proper and sound work of the back muscles but also unsound work of the same muscles.

In the musical freestyle, in order to fit the music step by step with Lafayette’s walk, I had to slow him down below his natural cadence. He never lost the correctness of his collected walk and indeed, gained muscle mass and body control through the experience. But Lafayette was very well coordinated and already muscularly developed working at his natural frequency before he was asked slow his pace even more. We have since used the technique for the rehabilitation of several horses including the mare named Diva, who had double ring bone around the joint between the second phalange and the coffin bone. Rehabilitation in this way is very efficient but it cannot be done half way.

Horses trained this way do not collect at the walk using coordinated back muscles. Instead, they contract the back muscles in an isometric hold, disconnecting the vertebral column mechanism and limb movements. The dysfunction leads to lateralization, a marching band-type of walk, and is aggravated by further slowing down the motion. I repeat: It is not because the horse slows down the walk that he lifts his back. It is because the horse lifts the back that he slows his pace. When the initial thrust generated by the hind legs is converted through the muscular system of the thoracolumbar spine into greater vertical forces, lesser horizontal forces reduce the speed.

Many riding and training techniques focus on one scale and are not aware of the damages created at a deeper scale.

Our ancestors promoted hardening tendons and bone density trotting on hard surface. There is no doubt that impact forces are part of the process but at a deeper scale, hard impacts create microcracks and microfractures in the subchondral bone which evolve creating arthritis in the cartilage of the joints.

Greater efficiency combining softer impact forces on softer ground and high forces on the bone created by eccentric contractions: “The suggestion that eccentric training, because it produces the higher muscle force on the bone during resistance exercise, should also result in the greatest bone adaptation is alluring.”

We applied this attractive hypothesis with great successes. Our practical application was not the typical experiment with a control group. It was the real thing. Scientific research is only useful if it can be applied.

Our practical application was the ultimate purpose of all these studies, to better prepare superior athletes for the higher level of equine athletic performances.

We prepared World-class and Olympic-level athletes for the most demanding athletic performance, which is the endurance phase of a three-day-event competition.

The practical application was not limited to one horse but instead dozens of horses. The horse in the picture at right was a thoroughbred trained this way. He reached international level and was retired after his performance at the 1984 Rolex Kentucky Olympic selection trial. The horse was 16 years old. He started a second career in dressage where he reached FEI level. He was put to rest at age 29, with perfectly sound legs but a spleen cancer that was destroying his superb body.

“The existence of discrete network within discrete networks in bones, cartilages, tendons and ligaments optimizes their structural efficiency as well as energy absorption.” (Christopher S. Chen and Donald E. Ingber. Tensegrity and mechanoregulation: from skeleton to cytoskeleton, 1999)

As long as the whole process of education and rehabilitation is not limited to one network.

One thought on “Rhythm and cadence: Should you slow it down or speed it up?”