Evidence of cardiac fatigue has been found in endurance horses following races of 120km to 160km, although its cause and clinical relevance remain uncertain.

The researchers performed echocardiography on the horses before and after the rides, and the following morning. They also took blood samples to test for levels of cardiac troponin I, which is a biomarker that provides insight into damage to the heart muscle, and hematocrit and serum protein concentrations – two indicators of the hydration status of the horses.

Mette Flethøj and her colleagues set out to investigate the effects on horses of prolonged exercise on left ventricular systolic and diastolic function. The left ventricle is the powerful heart chamber which pumps oxygenated blood along the aorta to the body.

The study team, writing in the Journal of Veterinary Internal Medicine, noted that prolonged exercise in human athletes was known to be associated with temporary impairment of function in the left ventricle, called cardiac fatigue, during diastolic function – the phase between beats when chambers are refilling with blood.

This reduced ventricular filling persisted for 7 to 21 hours after the rides, even after evidence suggested the hydration status of the horses had returned to normal. This indicated that the observed changes were not entirely related to what they called altered pre-load conditions.

The variables during pumping (the systolic function) showed ambiguous results. Overall systolic function appeared unchanged after the ride on the basis of no changes in ejection fraction or fractional shortening. In contrast, decreases in stroke volume and peak systolic strain indicated some impairment.

The similarities were considerable. They noted that most human studies agreed on the presence of diastolic dysfunction after prolonged exercise, whereas the results regarding left venticular systolic function were, like horses, inconsistent. 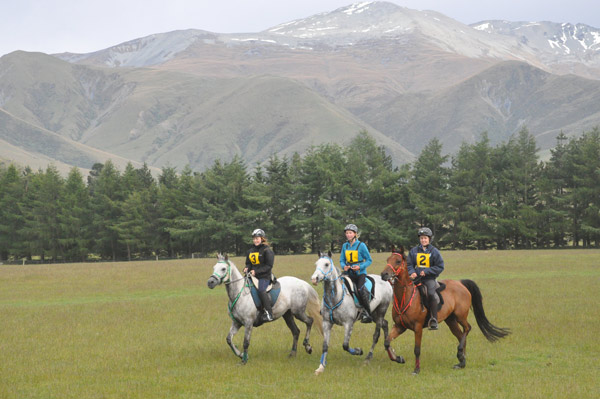 Discussing their findings, the researchers said multiple echocardiographic variables were significantly changed in horses after an endurance ride, and most of them persisted after several hours of recovery.

“Overall,” they said, “the effects of prolonged exercise were small and the clinical relevance of these findings remains to be clarified.

“The decrease in cardiac function after exercise is relatively small and resolves within 24–48 hours, but the long-term effects of such short-term reversible changes remain unclear.”

They continued: “The echocardiographic findings were generally comparable to those in human athletes, with indications of diastolic dysfunction and ambiguous results on variables of systolic function.”

The diastolic dysfunction seen in horses after prolonged exercise could only partly be explained by altered loading conditions, although the cause and clinical significance could not be determined from the study.

The clinical significance of cardiac fatigue was likewise unknown, they said.

The authors acknowledged some limitations in their study, but concluded: “A diastolic dysfunction characterized by small but significant decreases in early diastolic myocardial velocity and strain rate was observed in horses after the endurance rides.

“It is speculated that the diastolic dysfunction might be related to impaired myocardial relaxation and compromised ventricular recoil after exercise.”

The results regarding the presence of a systolic dysfunction were open to more than one interpretation, they said.

“Another possible explanation is that the impressive cardiac reserve and physical superiority of the horse compared to humans imply that this species can endure physical exertion for longer periods of time before systolic dysfunction becomes evident.”

The study team noted that the average completion rate in international endurance rides was 50%, and about 10% of starting horses were eliminated for metabolic reasons.

Despite the immense physical strain of this discipline, the cardiac effects of endurance riding were largely unknown, they said, with the exception of a study indicating the presence of exercise-induced left ventricular systolic dysfunction with significant decreases in stroke volume, ejection fraction, and fractional shortening.