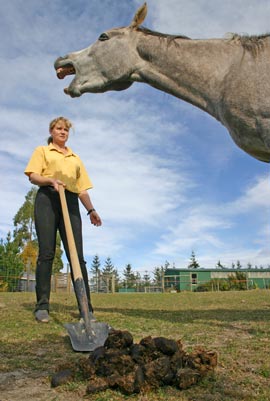 Stress may play a role in horses suffering from a condition known as faecal water syndrome, German researchers suggest.

Horses with the condition pass normal faeces, but in addition faecal water runs out of their anus.

Various anecdotal factors such as an increased parasite burden, the feeding of haylage or dental problems have been suggested as possible factors, but the study team from the Veterinary Faculty at Ludwig-Maximilians-University of Munich found no supporting evidence.

Ellen Kienzle and her colleagues set out to identify management factors associated with faecal water syndrome among pleasure horses.

Owners of affected horses were recruited through a notice in an equine journal.

Forty-two responders were asked to complete a questionnaire on their horse. A fecal sample was taken to assess each horse’s parasite burden and blood was also drawn for analysis. Similar samples were taken from a clinically healthy stable mate in each case for comparison.

Thirty-seven of the horses were found to be group housed or turned out in groups. The study team found that a surprisingly high number of these horses were perceived by their owners as being at the lower end of the social hierarchy.

As a result, another 37 owners of horses which did not suffer from the syndrome were interviewed on their horses’ behaviour with the same questionnaire.

“Forty percent of faecal water horses were considered to be last or second-to-last in the hierarchy compared to 4% in the behaviour control group,” the researchers reported.

In addition, 62% of the faecal water horses compared to 27% in the behaviour control group did not defend their food against other horses.

The researchers, writing online in the Journal of Equine Veterinary Science, found no significant difference between the faecal water horses and their stable mates in terms of their parasite burden or blood analysis.

No factors related to feeding could be identified as being linked to the syndrome.

Geldings and paint horses were over represented among the faecal water horses.

The results suggested that social stress may play a role in the development of faecal water syndrome, the study team concluded.

They assessed the major risk factors for the condition as being of low rank in the social hierarchy, being a paint, and being a gelding.

Kienzle was joined in the study by Carolin Zehnder, Kurt Pfister, Hartmut Gerhards and Carola Sauter-Louis, all from Ludwig-Maximilians-University of Munich; and Patricia Harris, from the Equine Studies Group, which is part of the Waltham Centre for Pet Nutrition in Britain.