A book has been published telling the moving story of Smoke, the Iraqi donkey who served as a mascot for a marine camp and was rehomed to the United States after a major international effort.

Smoke was flown to the US in May 2011 after a big push to get the necessary clearances. He went to a Nebraska ranch and began a career as a therapy donkey.

The effort to give Smoke a safe home in the US was led by retired marine Colonel John Folsom.

Now, the story of Smoke and Folsom’s dedication to provide him with a safe home has been chronicled in Smoke the Donkey -A Marine’s Unlikely Friend, written by his wife, Cate.

Sadly, Smoke died in August, 2012. It was subsequently found that he had a pre-existing condition – a rupture in his intestine which had healed. Unfortunately, during the healing process the scar tissue adhered to the abdominal wall and eventually ruptured, causing his death.

Smoke’s connection with Folsom went back to 2008, when the colonel was based at Camp Taqaddum, in Iraq’s Anbar province.

Folsom had given orders that any animals wandering around the camp should be captured.

He woke one morning to find Smoke tied up outside his digs. Smoke was scruffy, malnourished and wounded, but responded to care.

The military heirarchy gave approval for Smoke to stay as a mascot after a Navy doctor attested that Smoke was good for morale.

He proved be a huge hit with the marines. He earned his name one night, while hanging out with the marines as they relaxed after work. The donkey snatched someone’s lit cigarette and gobbled it up.

Smoke was nursed back to health by the soldiers, and soon became the unit’s mascot and friend.

The soldiers continued to care for Smoke after Folsom returned to the US, but once the soldiers began to turn over he was put into the care of a local sheikh.

Folsom could not stop thinking about Smoke and was determined to rehome him to the US, providing him with the kind of life and home he deserved.

However, moving a donkey from Iraq proved no easy task, with strict border controls and health requirements presenting major obstacles.

Smoke became the center of an international rehoming effort.

His friends faced a series of health, quarantine and bureaucratic hurdles, but Smoke finally flew into New York’s JFK International Airport in May 2011 at the end of a 6000 mile journey.

SPCA International and its team of animal rights experts successfully worked with the Turkish Minister of Agriculture and Rural Affairs to allow Smoke passage out of Iraq through Turkey to arrive in New York City.

Smoke was quarantined at stables near the airport for a brief period before being officially released.

He was then reunited with Folsom.

Smoke moved to Nebraska and settled on a ranch, from where he launched his career as a therapy animal. He buddied up with miniature horses Taffy and Domino, and undertook work for a non-profit group that uses equine therapy to help military personnel recover from post-traumatic stress disorder. 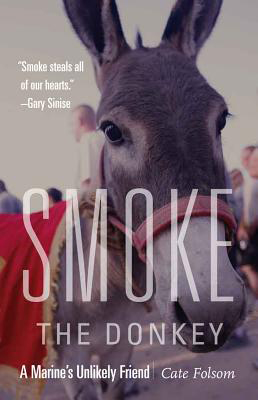 The little donkey was subsequently honored by the Nebraska Humane Society early in 2012 for his service as a therapy donkey and his work with military families.

Folsom was understandably saddened at the unexpected death of Smoke in August. He said at the time that Smoke needed to be remembered for the joy he brought to those whose lives he touched and not mourned because he was gone.

“He will forever live in our hearts. In that way, he will always be with us. I will put up a simple granite marker at the Nebraska Humane Society in both English and Arabic. It will be simple because he was, too.”

His brief Twitter biography read: “From Iraq. Now living in the US. I love meeting new people and enjoy eating carrots & apples. S/O to everyone who helped me get here and the US Marines.”

Cate Folsom’s book recounts the strong friendship between her husband and Smoke, and the massive challenges of reuniting Smoke with Folsom in the US.

Smoke’s story, while tinged with sadness, speaks to the enduring bond between a man and an animal, unbroken by war, distance, or red tape.

The book can be ordered here.