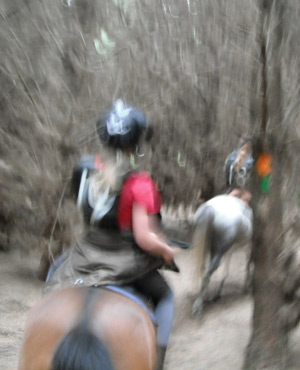 Television soap operas are a pretty poor substitute for the ongoing dramas we have seen unfolding in endurance in the United Arab Emirates.

In the latest gripping episode, we are left second-guessing events that unfolded around the Dubai Crown Prince Endurance Cup, raced over 120km on March 19.

The FEI has said precious little about it, which has left the endurance community pondering whether a great deal of trouble is brewing or whether the FEI has its head buried in the desert sand.

My personal view is that another endurance storm is looming, and it could well blow up in the next few days.

Central to this ongoing saga is a report from the Emirates Equestrian Federation due at FEI headquarters about now, and what the FEI Bureau, scheduled to meet early in April to coincide with the world governing body’s annual Sports Forum in Switzerland, thinks about it all.

The circumstances surrounding recent events are not entirely clear, so we face a mix of fact and speculation.

Let’s have a look at what we know, or in some cases what we think we know, about the closing race fixtures in the current UAE season.

The Dubai Crown Prince Endurance Cup, set to be run over 140km, was scheduled for March 19 as a CEI*** (international) event.

It is understood that the FEI’s endurance director, Manuel Bandeira de Mello, arrived in Dubai in the days before the event. I am led to believe that de Mello subsequently had discussions with members of the event’s organising committee.

We can only speculate about the nature of that discussion and its tone, but we do know that the organising committee belatedly downgraded the race to a CEN (national) event and pegged it back to 120km.

Most endurance train-spotters consider there is a link between the discussions and the move to downgrade the event, but that remains speculation.

As far as I am aware, the reasons have yet to be revealed publicly by either the Emirates Equestrian Federation or the FEI.

Now, for the really interesting bit.

The results from that ride appear to suggest that it was run contrary to the agreement struck between the Emirates federation and the FEI in mid-February, specifically in relation to maximum heart rates.

You may recall, in an earlier episode of our Peyton Place of the desert, the two bodies struck a deal over the remaining endurance fixtures for the UAE season. This was in mid-February.

This deal followed high-level meetings between the FEI and the Emirates federation in both Switzerland and the UAE on proposed measures to urgently address yet more welfare-related issues in endurance in the region.

The changes were apparently signed off during talks in Abu Dhabi between de Mello and senior officials from the Emirates national body – its vice-president Mohammad Alkamali, secretary general Taleb Dhaher Al Mheiri, and executive board member Faisal Al Ali.

The FEI listed 12 approved measures to see out this season. Item 3, as described by the FEI in its February 13 statement was: “Heart rate presentation times reduced to between 56 and 60 beats per minute for all loops in one-star competitions, and in the final loop for two and three-star CEIs and CENs.”

However, the results for the March 19 CEN, as shown on the Dubai Equestrian Club app, show successful completions for horses getting through with heart rates above 60, perhaps indicating that the event proceeded with the mark of 64bpm – that used before the mid-February agreement.

This unsurprisingly got the online endurance community abuzz. What, they understandably asked, was going on?

I asked this question of the FEI at the time and, while its media liaison people thought they would have a response for me within 24 hours or so, it transpires the world governing body has nothing to say on the issue for the time being.

So, as things stand, one can understand the cynics among us taking a very dim view of all this. It’s not difficult to discern something of a pattern here, and it does not look good, in my opinion.

It always struck me that this matter would most likely end up before the FEI Bureau, and this appears to be the case.

Horse-Canada.com is reporting the following from an FEI spokesperson: “We have asked the Emirates Equestrian Federation to submit a report to us by 29 March and the information in that report will be provided to the FEI Bureau for discussion at its in-person meeting early next month. As part of that discussion the FEI Bureau will evaluate whether the 12 approved measures have been enforced.”

That report will make very interesting reading, indeed, not that we are likely to see it.

Many in the endurance community feel that the FEI has been too accommodating in its dealings with the United Arab Emirates over these welfare issues, and there is widespread concern that repeated efforts have failed to satisfactorily deal with the problems.

The headlines have been damaging to endurance and the FEI has yet to portray itself as the bold and daring guardian of horse welfare in this real-life soap opera. Its character has been more akin to a pen-pushing overly accommodating bureaucrat rather than a derring-do type prepared to confront the problems head-on.

It is possible, I guess, that the Emirates federation will be able to offer an entirely plausible explanation for what has occurred – or, should I say, appears to have occurred. Perhaps my interpretation of the heart-rate stipulations of mid-February is wide of the mark.

If not, the FEI may well be out of compromise options, which it has largely favoured since all this endurance fuss blew up a few years back.

In fact, the 12 approved measures from mid-February were themselves a compromise of sorts – a series of changes that enabled the UAE to see out its season.

So, are we looking at a cliffhanger final episode? Will the bureaucratic FEI show some mettle? Will the Emirates Equestrian Federation come up with a compelling explanation for why it appeared to opt for higher heart rates than those agreed? Will the FEI Bureau go as far as imposing a provisional suspension? What will be the fate of the world endurance championships, scheduled to held in Dubai in December?

One thought on “UAE Endurance: The real-life soap opera continues”